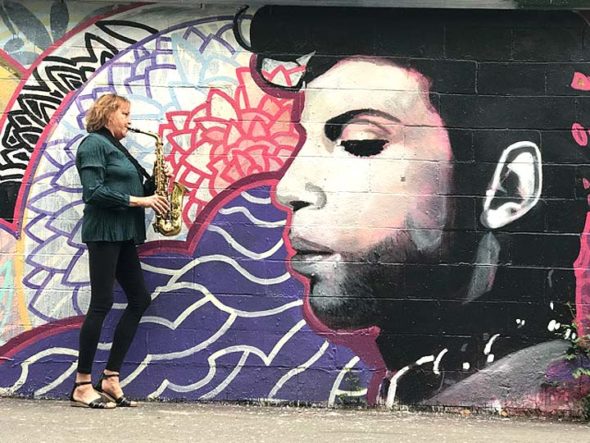 Musician Tucki Bailey recently returned to Yellow Springs after 17 years in California. She’s headlining the Dayton Jazz Festival this Sunday, June 11, in Riverscape MetroPark in downtown Dayton. Bailey and her band, Tucki and the Vagabonds, will play at 7 p.m. (submitted photo)

You’ll have a hard time finding a chair in Tucki Bailey’s living room, and you won’t see any tables or bookshelves. But you can’t miss the grand piano (her grandfather’s) that anchors the room, or the row of saxophones and flutes that stand ready near the piano. So while furniture might be in short supply, the presence of instruments makes clear that Tucki Bailey’s at home.

After an absence of 17 years, Bailey, a well-known area musician, is home again in the village. In February she moved from northern California back to Yellow Springs, where she makes music and teaches students in her West Whiteman Street home.

And this weekend Bailey will make her re-entry musical debut as the headliner at the Dayton Jazz Festival. The festival takes place this Sunday, June 11, at Riverscape MetroPark in downtown Dayton, from 11 a.m. to 9 p.m. Bailey’s band, Tucki and the Vagabonds, will perform at 7.

Coming so soon after her move, headlining the festival is a lot to take on. Bailey originally called to let festival organizers know she’s back, and find out if she could play a set at the event, the new iteration of Women in Jazz, where Bailey has performed regularly and last performed five years ago. But the festival needed a headliner, and the manager asked if she could do it.

Bailey said yes, although she had to scramble. First, she had to assemble a local group of musicians, after being away for almost two decades. Next, she had to come up with a set list for a group that hasn’t yet performed together (although several are old friends and colleagues, including keyboard player Carl Schumacher, who is also Bailey’s ex-husband). And most of all, she needed to practice her sax, which she hasn’t performed on for five years.

But last Friday, only a week before the event, Bailey was undaunted.

Playing her horn is what Bailey wanted to do a lot when she moved from Yellow Springs to California 17 years ago. She and her daughter, Tess, then a high school junior, shared a studio apartment in south Pasadena, where Bailey found mainly studio work. Several years later, after meeting the man who became her second husband, Bailey moved to northern California and looked for work in the Bay area.

But the economy had taken a downturn. Work dried up, and Bailey took what she could get, which was mainly playing piano and keyboards. She made a living, but didn’t get to play her horn.

But she loved the Bay area and it was home, the home where she grew up years ago. Bailey was only 15 when she got her first gig at a club in San Francisco’s North Beach neighborhood, where she had to lie about her age.

She had fallen in love with music as a child, although her family wasn’t especially musical. Bailey studied piano and flute and when she was a teenager her music teacher asked her to perform with him on his gigs. She took him up on his offer, and they ended up with a regular gig in the touristy Ghiardelli Wine Cellar every Friday and Saturday night, where Bailey, who hadn’t yet discovered the saxophone, played flute.

Living the life of a professional musician at such a young age was a challenge, but Bailey wouldn’t have it any other way.

“It was my love,” she said of music. “I didn’t have much of a social life. But I always had a buck in my pocket!”

In college, Bailey discovered the jazz band and the saxophone, and she fell in love all over again. She continued performing, and in the heady early 70s she practiced her horn at Golden Gate Park. And for a while she played with Country Joe McDonald of Country Joe and the Fish.

Bailey was performing at a Sausilito gig when a friend, Bruce Schumacher, brought his younger brother, Carl, to see the band. The two became friends and later Bailey asked Carl, a keyboard player, to join the band. He lived close by and used to give her rides to their gigs. After a while, the two musicians became a couple, living together in San Francisco and making a life as musicians.

But one night their big old house was ravaged by fire, and Bailey barely had time to grab her instruments before finding safety. The last thing she grabbed from the house was the picture of legendary saxophonist Charlie Parker from the wall.

Devastated by the fire, the couple decided to move to Yellow Springs, where Schumacher, the son of local musician and music teacher Mary Schumacher, had grown up. So they moved back to Ohio in 1981, and their daughter, Tess, was born in 1984, the same year that Bailey performed in the first Women in Jazz festival. She continued performing for the festival’s next 20 years, until leaving for California. But she still came back to play in the festival and to serve as musical director and perform for Yellow Springs Kids Playhouse.

After Bailey moved from Pasadena to northern California, difficulties in her marriage increased. Then this winter Tess, who is now a veterinarian, flew out to California to bring her mother back to Ohio. Bailey began rebuilding her life, once again in Yellow Springs.

She has felt overwhelmed by support, Bailey said. One friend, Lynn Bobo, brought over lamps for the house, while Cathy Roma brought chairs and Bev Logan contributed plastic containers. And her good friends Amy Harper and Jamie Sharp have offered invaluable help.

Right now, she’s focused on her upcoming performance. She’s excited about her set list, which includes three original compositions along with samba and jazz classics. It’s been years since she’s played with the musicians she’s chosen, and she’s thrilled to be together again.

It’s been a tough couple of years and it’s not easy to start over again. But Tucki Bailey knows that music will see her through.

One Response to “Tucki’s back, headlining Dayton Jazz Festival”