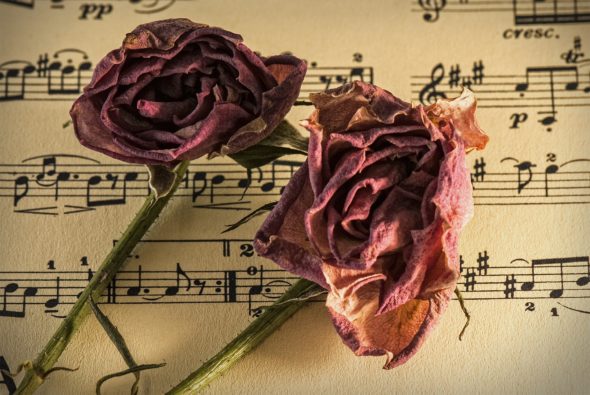 "At a Crossroad: Will You Live, Love or Die?" will be performed Thursday, Aug. 10, at the Senior Center.

You might not consider classical music as a tool for examining sexism; that’s quite alright for Cleveland-based duo Burning River Baroque, who will be more than happy to show you it can be done. Burning River Baroque — soprano and violinist Malina Rauschenfels and harpsichordist Paula Maust — will present “At a Crossroad: Will You Live, Love or Die?” on Thursday, Aug. 10, beginning at 7 p.m. in the Senior Center great room.

“At a Crossroad” will feature several French Baroque works, which center around themes like fidelity, vanity and fertility. Or rather, these are the themes which the authors of the pieces considered when writing the pieces; Burning River Baroque’s program groups the pieces together with the intention of examining them in the light of their historical context, as well as with a modern lens. As the duo remarks in press materials: “Many composers in the baroque era were inspired by the characters and stories from ancient writings, and they used these mythological and fictional characters as the subjects for their compositional creativity. As twenty-first-century audience members, we are in a unique position to enjoy these musical works as pieces of a multi-faceted history. We can engage with them as commentaries on cultural norms in the 18th century as well as evaluating how they relate to our current society.”

Part of Burning River Baroque’s mission is to bring classical music to new ears; concert-goers who are not particularly versed in Baroque music may be drawn by the stories presented in some of the songs, or the examination of the cultural mores of days gone by.

“We love having audiences that include both seasoned concert goers as well as people who have never been to a classical concert before,” said Rauschenfels via email this week. “It is particularly amazing to watch the expressions on an audience’s face when they are utterly captivated by something they never thought they would like, or are being introduced to for the first time.”
For those of us not immediately familiar with French Baroque music, Rauschenfels broke down several of the pieces that will be performed, and the ways in which the duo have examined them:

“Semelé,” Élisabeth Jacquet de la Guerre — “In the myth surrounding this piece, Hera, Zeus’s wife, is jealous of Semelé, Zeus’s mortal girlfriend. Hera works to make Semelé doubt Zeus’s word, and tricks her into making Zeus show himself as a God, which she knows full well will kill Semelé. Yet in this text, Semelé is portrayed as arrogant and full of vainglory for only being interested in being appealing to a god. Her death seems to be justified because of her perceived shallowness. In preparing the piece, quite different thoughts came to my mind. It made me think of issues of victim-blaming when we ask the victim what they did to get beaten by their spouse. It made me think of unhealthy relationships where ex’s get involved, or well-intentioned friends analyze their friends’ partner’s behaviors. How often is blame placed on the woman, rather than the man? How often would our reactions change if we were told the story from a different perspective? Considering these issues of media and press and point of view make a concert so much more engaging for me to think about as an audience member.”

“Le Printemps Cantatille,” Julie Pinel — “[This piece] is a miniature cantata about spring. Often in mythology, spring is ascribed to successful love bringing about the fertility of spring. One of the things that I like in this particular cantata is the congeniality of the characters. In the final movement, the spurned lover is happy that the nightingales are singing beautiful love songs to each other, because he hopes they will melt the heart of his cold object of affection. Too often in these myths, we see non-consensual sexual exploitation of women or uncontrolled male jealousy leading to death and destruction of someone else in the story.”

“La Matrône d’Éphèse (The Widow of Ephesus),” Nicolas Racot de Grandval — “In Grandval’s epic parody, one soprano plays six different characters. [W]e witness one culture’s view of widowhood and examine what we owe the deceased. Ultimately, we must each find the balance between pursuing our own happiness and pleasing others.”

Suggested donation for admission is $10 to $20. For more information, visit http://www.burning-river-baroque.