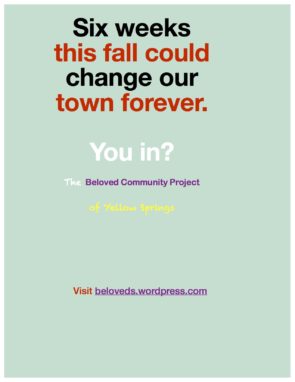 What began as a community meeting in 2015 has led to a six-week journey this fall.

When my father, Dr. Jon Saari, was hired by Antioch College in 1983, our lives changed. For four years, Dad commuted back and forth between Cincinnati and Yellow Springs–a professional drive I would make thousands of times over the fifteen years I was on faculty at Xavier University. Dad decided much sooner than did I that life is better when you live where you work. I

I am endlessly grateful that he did.

Growing up in the halls of Antioch forever impacted my consciousness. I was in student plays — like Bertol Brecht’s “The Informer” — and I watched as my father, Dr. Jim Malarkey, Dr. Jackson Keitel, and others started the School of Adult and Experiential learning, which eventually became AUM. I graduated when the school was on Antioch College campus, having studied with Jim Malarkey, who is now on my doctoral dissertation committee. I love Antioch.

I also love Yellow Springs High School. Gudgel, McCurdy, MacDonald, Mullins, Rainey, Davis, Ventling, Christopher, Ruddel. These names ring out in the lives of me and my contemporaries. Our schools–include Antioch School–are filled with teachers I know from childhood or whom I have met through village life. In fact, YSHS is one of the few places I can go back to and feel almost like I did when I was a kid.

I am coming up on my fifth year pastoring First Presbyterian Church, and writing at the News recently has been a dream come true. My life is all YS all of the time.

My life is now all YS all of the time.

God willing and if the creek don’t rise, I will have finished my doctoral program by August 2018. If you’re not familiar with the Beloved Community Project, click here and here.

When I was diagnosed with Bipolar Disorder three years ago, I was working at Sinclair College as a multifaith campus minister. I was employed by an historic organization celebrating its jubilee year. In my first year, I helped transition them to their current form as the Multifaith Campus Alliance. In my eighteen months there, I did the most significant work with the Sinclair Muslim Student Association (MSA). I met a young woman named Falastine Issa, who is a working partner on the upcoming project about which you are now reading.

She’s legit going to be president. I call 2040. But that’s another conversation.

I believe that American Christians have a fundamental responsibility to stand in solidarity with their Muslim siblings. But I do not desire to just work with Muslims and Christians. Our greatest strength is our diversity, but it requires real work. We cannot be content with “agreeing to disagree.” We cannot pretend that a Muslim woman of color sees the world in the same way as an atheist, Latinx trans person.

At the final event of the BCP’s inaugural season, there was an African-American woman wearing a niqab sitting next to a transman and his wife.

I am a descendant of Frederick Denison Maurice, who was the founder of Christian Socialism–a movement I plan to resurrect after defending the dissertation–and he was also a prominent Anglican who lectured positively on Islam in the 18th century. To be sure, Uncle F.D. was a product of his time; he believed Christianity is the super faith tradition and the only path to true salvation. My praise of him is measured. However, at Oxford, he openly lauded the ethics and understanding of God found in the Muslim faith. As Olive Brose, F.D.’s definitive biographer has written, Maurice was a rebellious conformist. I feel an ancestral push to further the work of my esteemed relative.

Over the last two years, I have been listening to, speaking with, and gathering anecdotal information from the students, faculty, and staff of both Antioch College and YSHS. Through the BCP, we’ve heard from villagers from ages 2 to 102 about what can bring us together to be better neighbors to our Muslim community members.

Last year, I taught the kids at FPC the Five Pillars of Islam. We went to the mosque in Springfield for a service and a meal. I have communicated with both the Miami Valley Islamic Association and the Islamic Society of Greater Dayton. But our strongest, most promising collaboration is with the Fazl-i-Omar Mosque in Dayton.

In 2015, earnest in my naivete, I issued a call to discuss how Yellow Springs could receive a Syrian refugee family. We had a solid turnout of citizens, and we pledged to take action. This led to us coming in contact with Catholic Social Services of the Miami Valley. First Presbyterian Church hosted a less well-attended session in which CSSMV gave their “Refugee 101” presentation.

It became clear to me that in order for Yellow Springs to have any hope of once again providing refuge and home to those who undergo unthinkable traumas and go to exhausting lengths to find a new home, we must have organized efforts that cut across the community: YSHS students, Antioch students, villagers, and village government.

I also have a fundamental responsibility to be a good steward of the congregation that has been passed from pastor to pastor since 1855. They are older and the financial burden of the building is too great for an ever-shrinking community. We live in a post-Christian age, but First Presby has always been a bit odd. A bit on the rebellious side. They were the first church to racially integrate within Greene County. They, albeit imperfectly, began tackling LGBTQ+ inclusion decades before the national church. This congregation must survive.

So I’m testing an idea. It’s bold and it might not work. Paraphrasing FDR, we’re going to try something and if it doesn’t work, let us admit it frankly and try something else. But above all else, let us try.

Starting October 7 and ending November 16 there will be three programs. The first will be a return of CSS for a “Refugee 101” program, along with the showing of a short film on a community in our area. Those gathered will begin connecting with one another. We don’t expect an action plan, but we do hope that we’ll be in the first stages of coalition building. The program is on Antioch campus at 1:30 on Saturday, October 21. Building and room TBD.

The second event is 5:00 pm on October 28 at First Presbyterian Church. This will be a halal-friendly potluck. Please bring a covered dish. If it is not halal, please mark it as such. We will have an interactive discussion led by two Muslim women, Angela Imam Griffin and Falastine Issa. Other Muslim guests will be in attendance and speaking as well, but we will focus on what it is like to Muslim in our area. How can non-Muslims help? What shouldn’t we do? How can we combat Islamophobia with how we live and interact with others? This will be a family-friendly event!

The third and final event is the return of our liturgia. The BCP has on staff an Artistic Director (Anna Burke), a Musical Director (Ryan Stinson), and a Director of Social Justice Concerns (Sommer McGuire). Over the six weeks of the project, they hope to work with other artists and musicians (especially YSHS and Antioch students, but all are welcome!)on themed pieces that will be featured at the liturgia. Sommer will consult with YSHS and Antioch students on forming a coalition that can be a legacy for both the high school and the college.

The most important thing anyone can do right now is to fill out a survey. You will notice that there are surveys for different groups. Please take the appropriate one, and even if you cannot attend any events please do fill out this survey, and I’ll be communicating through future blog posts about future data-gathering efforts.