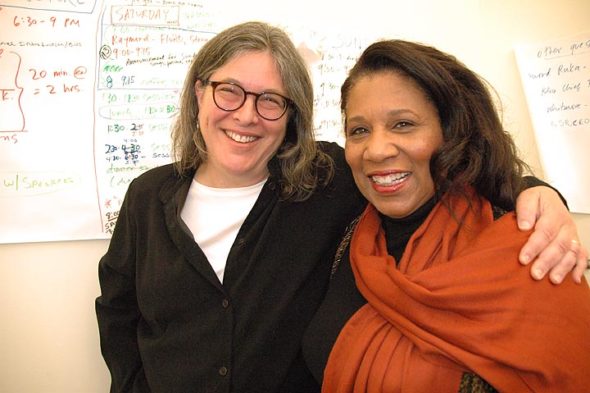 Villagers Jennifer Berman and Jalyn Roe are the organizing forces behind a national conference on restorative justice, “Healing Harms in Today’s Troubled World,” to be held Oct. 27–29 at Antioch College. The event aims to teach participants about the principles and practices of restorative justice. (Photo by Diane Chiddister)

Feeling despondent after the presidential election, Jalyn Roe expressed on Facebook her concerns regarding the direction this country is heading, including what appeared steps toward a more repressive criminal justice system. Forty-five people responded to the post, including Jennifer Berman, who suggested bringing restorative justice to Yellow Springs. While doing so wouldn’t change the national criminal justice system, it might improve life in the village, Berman said.

Roe took Berman up on her offer to teach her about restorative justice. It wasn’t long before the two women shared a passion for the alternative approach to dispensing justice.

“It was like a light bulb came on,” Roe said recently. “I thought, this can be the answer.”

Soon after, the two began dreaming about holding a national conference on restorative justice in Yellow Springs, then took steps to make that dream a reality. Next week, from Oct. 27 to 29, “Healing Harms in Today’s Troubled World,” the first Annual Community & Restorative Justice Symposium, will be held in the village.

The symposium takes place from Friday evening through Sunday noon, mainly on the Antioch College campus, and is sponsored by Antioch College, the Yellow Springs Community Foundation and the nonprofit organization CEO, or Community Empowerment Organization, founded by Roe.

And unlike the current justice system, which requires that offenders and victims only talk through lawyers but not to each other, restorative justice asks all involved to speak directly to each other. In restorative justice, the offender, the victim and community members are brought together to share their stories about what caused the offense, what harm came from it, and how to make amends.

The face-to-face engagement itself can be healing, Berman said.

“It’s a good antidote to how removed we’ve become from our neighbors,” she said.

These speakers will kick off the event on Friday, Oct. 27, with an opening panel discussion on restorative justice. In order to accommodate as many as possible, the event takes place at the John Bryan Center gym, from 6 to 9 p.m. While the suggested donation for the opening session is $20, organizers want all interested persons to come, regardless of ability to pay.

“If you don’t have the money, come anyway, “Roe said.

The symposium continues with an all-day workshop on Saturday, Oct. 28, on the Antioch College campus. After selecting a focus either on restorative justice and race, or restorative justice in higher education, participants will learn specific practices using the restorative technique. In the evening, participants will gather at the Coretta Scott King Center for live music and an opportunity to engage with each other. The symposium winds down Sunday morning with a wrap-up session at the Antioch College Wellness Center, followed by restorative yoga led by yoga teacher and Wellness Director Monica Hasek.

While many have already registered for the symposium, some openings remain, according to organizers. The cost for the whole weekend is $275 for general admission, $65 for students and Yellow Springs residents and $50 for nonprofits. To register, go online to http://www.eventbrite.com and type in “Restorative Justice Symposium” and “Yellow Springs.”

The event is aimed at teachers, community organizers, social workers, those involved in the criminal justice system or affected by it, and anyone interested in justice, organizers said. And learning the restorative justice techniques can help participants make changes right away. “You can get trained on Tuesday and use the tools on Wednesday,” Roe said. “It’s something you can use immediately.”

Partnering sponsors are the Yellow Springs Chamber of Commerce, the Human Relations Commission, or HRC, the Wellness Center, the Coretta Scott King Center and Emporium Wines/Underdog Cafe in Yellow Springs. Donors include an anonymous donor and the Laura Curliss for Mayor campaign.

Berman and Roe aim to follow this first symposium, with its focus on restorative justice and race and higher education, with a spring event aimed at K–12 educators. But they encourage anyone interested in justice, or just in fairness, to take part in the event, and learn more about restorative justice. It’s a practice that fits well with villagers’ enthusiasm for tolerance and social justice, they believe.