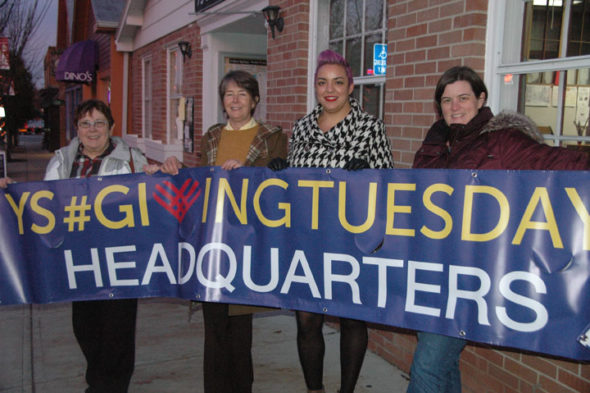 #YSGivingTuesday committee members, from left, Kathryn Hitchcock, Jeannamarie Cox, Dawn Boyer and Ara Beal, are preparing for the village’s second year participating in the charitable giving campaign that falls on the Tuesday after Thanksgiving. While the initiative is focused on online giving, the local effort also will accept in-person donations from 8 a.m. to 8 p.m. Tuesday, Nov. 28, at the Yellow Springs Senior Center. (Photo by Carol Simmons)

A day for community giving

After collecting $75,000 in a single day last November, an effort to raise money for local nonprofit groups is returning to the village for a second year this holiday season.

The local initiative is affiliated with the global #GivingTuesday movement, an online campaign that falls on the Tuesday after Thanksgiving — Nov. 28 this year — and which was founded to counter the commercialism of the season’s more consumer-oriented “Black Friday” and “Cyber Monday.”

The focus is on giving, rather than buying, and nonprofit organizations and charitable causes are the beneficiaries.

In Yellow Springs, where local groups are allied under the umbrella of #YSGivingTuesday, the site is http://www.ysgivingtuesday.org.

The 2017 #YSGiving Tuesday participating organizations are:

Local organizers were thrilled with the $75,000 — which included a $10,000 matching grant from the Yellow Springs Community Foundation — raised last year among 16 participating local groups.

“That’s huge,” said Dawn Boyer, the director of advancement for Yellow Springs schools, who is a member of the #YSGivingTuesday planning committee.

“That was definitely beyond our expectations” for the local effort’s first year, Boyer said in a recent interview.

Created in 2012 by the New York City-based Belfer Center for Innovation & Social Impact and the United Nations Foundation, the #GivingTuesday campaign has continued to grow each subsequent year as more organizations and municipalities participate. Globally, last year, the movement raised $177 million, through 1,640,000 individual gifts, in more than 98 countries.

In Yellow Springs, the average amount received by each local organization was $3,700, with Antioch College raising the most at $27,000, according to Boyer.

Also important for the nonprofits, “most organizations reported they got new donors” through the 2016 campaign, Boyer said. The average number of new donors per group was six, which for small organizations is significant, she said.

Chuck Taylor, president of Chamber Music in Yellow Springs, reported that his organization “ended up with 18 donors, including five completely new to CMYS,” according to a posting on last year’s #YSGivingTuesday website.

Krista Magaw, executive director of Tecumseh Land Trust, said this week that the land preservation group had 37 donors, with seven who “were brand new to us.”

Attracting new donors, particularly younger people who are plugged into social media and who turn to online sources not only for information, but also to conduct their business, is an important part of the initiative, said Jeannamarie Cox, the executive director of the Yellow Springs Community Foundation.

Cox, who had just come on board at the Community Foundation when last year’s campaign was launched, joined the #YSGivingTuesday planning committee this year. Also on the committee are Ara Beal, the managing artistic director of YS Kids Playhouse, and Kathryn Hitchcock, representing the local chapter of the National Alliance for Mental Illness, or NAMI.

“It’s not so much about big donations,” Cox said of the online day of giving. It’s more about “connecting through social media and building donor bases.”

The Community Foundation serves as a hub for contributions and oversees the financial distribution.

The Foundation also is again providing a $10,000 grant, although this year’s distribution will be different. In 2016, the grant was divided by a formula based on funds raised. This year, “the $10,000 will be split equally among participating groups who complete key steps in getting ready,” Cox said. Those steps include having a plan and setting goals for the contributions. Participating groups also must be tax-exempt and be able to accept online donations.

The number of local groups participating in this year’s #YSGivingTuesday ucampaign has grown to 24. Only one of the original 16 — the Antioch Writer’s Workshop — is no longer part of the local effort, and that’s because the organization moved out of town, Boyer said.

Each of the participating organizations are identified on the ysgivingtuesday.org website with their logos. A visitor to the site can click on the individual logos to learn more about the group or contribute to its cause.

The website also offers a one-stop-giving experience, Boyer said. Donors may go to the site wanting to contribute to a particular nonprofit and then see listed one or more other groups they want to support.

Cox noted that giving to multiple organizations is made simpler in that donors will only need to enter their payment information once.

As the head of a small nonprofit, Tecumseh Land Trust’s Krista Magaw said she appreciates #YSGivingTuesday’s efforts toward building the donor lists and extending the networks of participating groups.

“For a lot of our organizations, it’s really an easy vehicle to plug into and get access to a new audience,” she said this week.

In particular, it helps “reach out to more young people who are used to getting their information electronically, using social media. … It’s a way for a young person who has not been giving to go to this one place and choose one or two things they care about,” Magaw said.

While the giving focus is online, local organizers recognize that some donors prefer to give the old-fashioned way — in person or with a check. To accommodate those contributors, a #YSGivingTuesday “headquarters” will be open from 8 a.m. to 8 p.m. Tuesday at the Yellow Springs Senior Center. Representatives of participating nonprofits will be on hand to accept personal donations. Of course, contributions are welcome any day or time of year, but in order to count as part of #YSGivingTuesday, Boyer said that donations must be made during the designated 24 hours.

Organizers agree that the effort not only supports the participating organizations, but also strengthens the community,

“It’s much more of a collaboration,” Community Foundation’s Cox said, noting that Bing Design, among others, “has been absolutely terrific in helping us” with such tasks as website support and promotional materials.

And the collaboration among the nonprofits “has just been great,” she said. That connection “is fundamental for the long haul and more sustainable beyond the one-day event.”