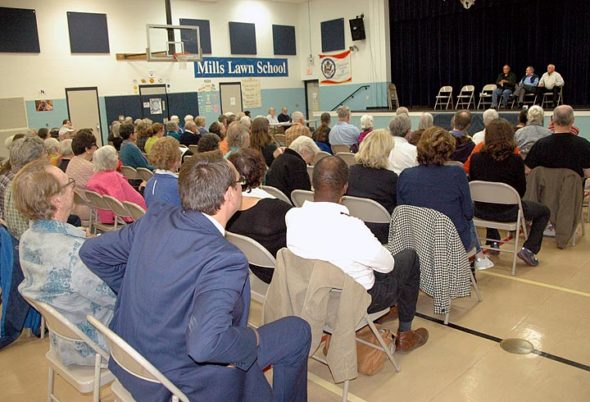 Last Wednesday and Thursday, more than 100 people per night attended the annual Candidates Night forums, presented by the James A. McKee Association, to spotlight candidates for local office. Shown above is the Thursday night audience for candidates for Miami Township Trustee, from left on stage, Mark Crockett, Don Hollister and Lamar Sparcklen. (Photo by Diane Chiddister)

The event, which attracted about 130 people, took place at the Mills Lawn School gym, with Fred Bartenstein as facilitator. During their five-minute introduction, candidates were asked to address what they see as the most important challenges facing the local school district.

One of the district’s most significant challenges is erratic state funding, according to incumbent Conn, a history professor at Miami University. While the state has cut funds in recent years, it has also increased the demands on school districts.

To address this issue, the local district has hired a fundraiser, an effort “that is beginning to bear fruit,” he said.

“I think our schools are doing a great job of producing fearless thinkers,” he said.

To Johnson, the district is challenged by maintaining good schools at a time when an increased number of villagers are struggling with the cost of living in Yellow Springs.

“We’re all feeling the crunch of rising housing costs,” she said.

The geographic information system (GIS) coordinator for Warren County, Johnson is a believer in the importance of data. She would research issues and bring data to the board meetings, she said, questioning whether the school’s learning model of project-based learning, or PBL, is meeting the needs of all students.

“Let’s put in place the metrics to measure” the effects, she said.

The radio reading services coordinator for Goodwill Industries, McQueen also mentioned local affordability as a challenge for the district.

“Families I know say they are two decisions away from moving out of town,” he said. “If we have state-of-the-art schools but no children to put in them, what’s the point?”

Recently married and with two children in the school system, McQueen said he wants to do his best to enhance the schools, which he believes are currently performing at a high level.

“I have a family now,” he said. “Our schools are very important.”

A co-owner of the Yellow Springs Psychological Center and local therapist, Merhemic said she is excited by how PBL energizes students.

The hands-on, child-centered learning model “empowers their real life experience,” she said. “Education becomes their own journey, which we help to guide and support.”

Role of the board

The issues of how best to address aging school facilities and the role of the school board were among the differences between incumbents and challengers.

Regarding the role of the school board, challenger Johnson stated that the current board is not taking enough leadership for the schools, instead ceding the role to District Superintendent Mario Basora. Basora should be doing the work of the board, not leading the district’s effort to update local facilities, she said, responding to Conn’s statement that a proposal to address the school facilities would not come from the board but from the superintendent, for the board to approve or not.

“We should be the visionaries here, not the superintendent,” Johnson said.

When Basora makes a recommendation, it will be “well thought-out,” according to Merhemic, who said she believes the board will make a decision that is equally thoughtful and responsive to the community.

The decision in question involves how best to address aging school facilities, a topic introduced by the district last year, following an assessment of local schools by the Ohio Facilities Construction Commission, or OFCC. That firm recommended that both Mills Lawn and YSHS be rebuilt, and suggested a price tag for the new buildings of $32 million. After the district suggested that it might put a levy on the ballot to raise that amount, the topic has become controversial, with the district holding five public meetings to gauge community response to the options of either rebuilding or refurbishing current facilities.

At the forum, Merhemic emphasized that the board is still listening to the community.

“The board has not made any decisions regarding facilities,” she said, also expressing her disappointment that she believes the topic has been framed in a negative way.

“There has been serious misrepresentation,” she said.

In response to an audience question addressed only to her, Johnson was asked how she could successfully interact with the board when she has been perceived as being very critical of it.

“I think critical thinking is an important part of learning,” she said. “I will speak my mind. That’s who I am.”

The question of how best to address school facility needs also highlighted differences. In response to an audience question regarding why the school board seems resistant to getting a second, independent, assessment regarding facility needs, other than the OFCC assessment, Conn said there is no need for a second opinion on facilities.

“We already have an independent assessment” of the facilities, because the OFCC “has no interest one way or another” regarding the outcome, Conn said, noting that the OFCC assessment was free, compared with a potentially costly second opinion.

Merhemic also questioned the assumption that the board was resisting getting a second opinion, stating that, “We just don’t have all the information we need yet.”

However, she said, such an independent assessment would likely be costly. Currently, the board is spending money contracting with Wright State University to conduct a survey regarding villagers’ preferences on the facility issue.

“We need to prioritize” the potential expenses, she said.

However, the challengers supported getting a second assessment for the facilities question.

“I believe you should always have a second opinion,” McQueen said.

And, according to Johnson, “I believe an independent assessment would be valuable. I don’t think the OFCC is thinking about our bottom line.”

In response to an audience question about what the candidates would need to know before voting on the facilities topic, Conn said his most important consideration is the capacity of the community to pass a levy.

“I would want to know that the levy has the widest possible support,” he said.

In response to the same question, Johnson stated, “I would need to know what the community could bear.”

Merhemic and McQueen were not asked the question, as Bartenstein put the audience questions to the first two candidates to respond rather than the whole group, in order to save time.

Regarding whether the candidates favored rebuilding or refurbishing school facilities, Johnson and McQueen responded.

The decision should be made not by the board but by the community, according to McQueen.

Johnson said she is especially skeptical of rebuilding in an era of rapid climate change, when environmental sustainability needs to be foremost in decision-making.

“How can we think about building new when we should make do with what we have?” she said.

She also stated her concern for the effects of costly rebuilding on local affordability.

“Does putting our kids in new buildings improve results? Probably, but at what cost to the community?” she said, stating that the added taxes that follow would “probably displace our most vulnerable families.”

Also regarding facilities, Merhemic and Conn addressed an audience question regarding how to improve the maintenance of current buildings, noting that currently the district employs only one maintenance person.

“The maintenance crew has done a tremendous job,” Conn said, adding that “it disparages the crew to suggest that they haven’t worked hard.”

“I was part of the group that helped shape” the district’s new pedogical model, Conn said, noting that before he was elected to the board, he was a member of the citizens’ group that proposed the 2020 Plan, the district’s long-range strategy.

“Teachers are overwhelmingly in favor of it,” he said regarding PBL, and if community members attend the district’s Exhibition Nights, “You can see the students’ enthusiasm.”

“I’m a big supporter,” she said. “I believe that hands-on, experiential learning is important to students’ engagement and success. I also believe PBL levels the playing field, and taps into the abilities of all students.”

In contrast, Johnson cited University of Minnesota research that she said shows that while PBL works well with high-achieving students, it can be less successful with students who struggle.

“Students without focus or agency do less well,” she said, citing a need for more data to back up local PBL outcomes.

In response to a question on how the district can attract highly qualified teachers, Conn responded that the district is currently doing so by using a pedogogical model that encourages risk-taking and adventure.

“Schools are places where faculty can develop their skills, a space to provide the space and freedom to do what they’re good at,” he said. “Too many tests killed enthusiasm. We want to be the opposite of that, a place where teachers can come to experiment.”

And, according to McQueen, “the schools do a good job of getting teachers here, but it’s the community that will keep them.”