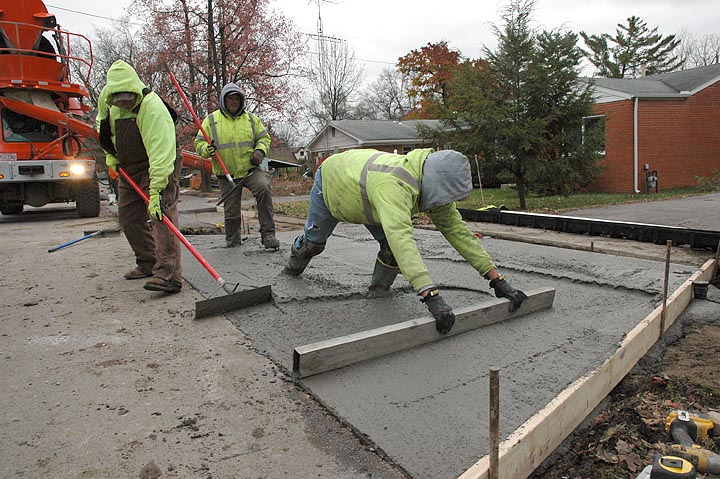 Several workers from Axis Civil Construction in Columbus poured concrete last week for a new sidewalk along the east side of Winter Street, part of the Safe Routes to School project. Shown above, crew leader Jacob Powell smoothed concrete after the pour. The project also includes a new section of sidewalk on Fairfield Pike from Fair Acres to Winter, in an effort to enhance safety for children walking to school. (Photo by Diane Chiddister)

“The idea is to increase safety and to increase walkability, especially for school-aged children who live in neighborhoods that previously didn’t have sidewalks,” according to Assistant Village Manager Melissa Dodd last week, describing the Safe Routes to School project. The project is adding sidewalks on Yellow Springs Fairfield Road from Fair Acres Drive to Winter Street, and also along a stretch of Winter Street from Yellow Springs Fairfield Road to Pleasant Street.

The project will allow children who live on Whitehall Drive, Gardendale Drive and Northwood Drive, collectively known as the Fair Acres neighborhood, safer passage when they walk to Mills Lawn School. While previously they had to walk along a stretch of a busy Yellow Springs Fairfield Road with no sidewalk, now there is a sidewalk on that stretch of road to Winter Street, where they can turn south to the school.

This week, Matt Housh, principal of Mills Lawn School, expressed his appreciation for the project.

“The sidewalk on Yellow Springs Fairfield Road is going to ensure that students in that neighborhood can safely cross the street and travel down to Winter without worrying about walking through yards or being squeezed out by traffic,” he wrote in an email. “Since I live in the Fair Acres neighborhood, I know how significant this is, and how much it will improve travel to school and beyond.”

The new Yellow Springs Fairfield Road sidewalk, on the south side of the street, is complete, and the Winter Street section should be completed this week, according to Dodd. The work, which began several weeks ago, is being done by the Columbus firm Axis Civil Construction.

The Safe Routes to School project began more than five years ago, sparked by a group of local bike enthusiasts and parents who sought safer passage to school for children. The group met for two years with former Village Assistant Planner Ed Amrhein to make an application for a federal Safe Routes to School grant, which initially included not only plans for new sidewalks but also for educational efforts. The Village learned in July 2012 that it received the grant in the amount of $308,000, to be overseen by the Ohio Department of Transportation, or ODOT.

However, the project then stalled for several years, partly due to turnover of Village staff, according to Council member Brian Housh this week. It moved forward again when Dodd took it on, according to Housh, who gave Dodd credit for bringing the project to fruition.

ODOT is paying 100 percent of the project’s $308,000 engineering and construction costs, according to Dodd.

The Village’s portion of the project amounts to $39,995, which covers costs related to right-of-way acquisition, she said.

“These increase safety and are ADA compliant because the ramps create safe transition from the curb to the road and they also have raised ‘bumps’ on them that act as a physical warning to those that are visually impaired,” Dodd wrote in an email. “So the project is essentially providing two things — the smooth transition from the curb to street and the raised ‘warning’ that the sidewalk is about to empty onto the street.”

The raised portion that is a red rectangle is called the “dome.”

The project followed several years during which Dodd and Zoning Administrator Denise Swinger sought funding for the project, in hopes of making sidewalks safer, according to a report from Dodd presented to Village Council.

“The goal was to complete a loop that connects the schools and central business district with safe routes for those that are impaired,” the report stated.

Construction on the next phase of the project, which covers Dayton, West South College and Elm Streets, will likely take place in 2018, according to Dodd. This portion is funded through ODOT, with a total cost of $134,999, with the Village paying $33,750 for construction and $4,180 for engineering.

Beyond helping to improve safety for children, the current projects move forward the Village’s efforts to make Yellow Springs more friendly to those who walk and bike, according to Village Council member Brian Housh this week.

“I do see these as setting the stage for improved walkability,” he said.

While the village already caters to walkers and bikers, there’s room for improvement, he believes. Toward that end, Council has added making Yellow Springs more walker- and biker-friendly to its 2018 Village Council goals. This fall, Council began a discussion on creating an Active Transportation plan, which aims toward addressing local street needs in the context of all modes of travel.

The effort was strengthened this fall when the Village was awarded an Active Transportation planning grant of federal funding worth about $65,000 through ODOT. The grant will fund consultation on the project with the Toole Design Group sometime this year, although the timing is not yet clear, Housh said. However, the Village is currently assembling a task force of villagers to work with Toole Design on transportation issues. Those interested in serving in the group are encouraged to contact Brian Housh at 776-9566 or Clerk of Council Judy Kintner at 767-9126.