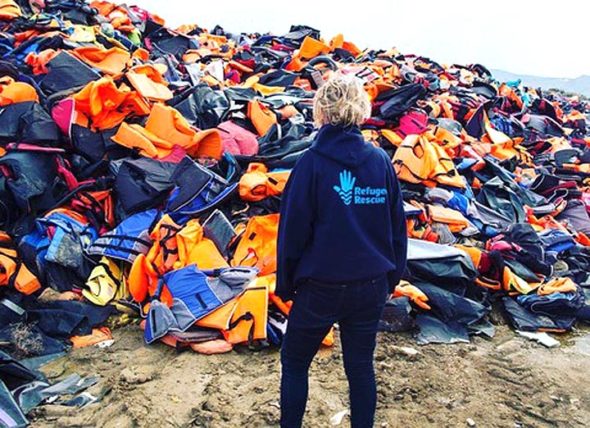 A volunteer for Refugee Rescue on the Greek island of Lesbos, which meets boats full of refugees as they arrive, is shown in front of a huge pile of life jackets used by refugees fleeing their homelands. Villager Regina Brecha, along with Anna Williamson, also of Yellow Springs, are currently among the volunteers. Her mother, Kaethi Seidl, and Beth Holyoke, who have both volunteered at Greek refugee camps, are holding a fundraiser for the cause on Tuesday, Dec. 5, at 7 p.m. at the Yellow Springs Brewery. (Submitted Photo)

Not long ago the world’s attention was riveted by refugees crossing seas in rickety boats in search of safety. But several years have passed, and the refugee story has been pushed out of the spotlight by more recent events.

Yet many in troubled countries remain in danger or lack food and basic necessities. Consequently, many are still fleeing their homes in hopes of finding political freedom or food for their family.

“They’re still coming,” villager Beth Holyoke said in a recent interview.
Holyoke knows what she’s talking about. In August, she and her husband, Andy, spent three weeks volunteering in two refugee camps on Lesbos, a Greek island that’s an often-used destination for refugees coming from African or Middle Eastern countries. While the Holyokes mainly performed other functions at the camp, there were two occasions when they were among those meeting boats carrying refugees.

“They’re happy when they get off the boat, but they’re freaked out and they’re cold,” Holyoke said of the refugees. “We gave them dry clothes, told them they were safe, that they had made it to Greece. Some immediately fell asleep, they were so exhausted.”

Kaethi Seidl also cares deeply about the refugee crisis. Her daughter, Regina Brecha, is currently volunteering on Lesbos, where she and her fellow Refugee Rescue volunteers, including Anna Williamson of Yellow Springs, greet about one boat a night loaded with refugees. Seidl’s other daughter, Francesca Brecha, volunteered last summer at Soul Food Kitchen, a street kitchen that aims to feed refugees living on the streets in the Greek city of Thessaloniki.

Seidl has also experienced the refugee situation firsthand, when in February she and Beth Holyoke traveled to Greece for the first time to volunteer for the nonprofit Emergency Response Centre International, or ERCI. While there they helped distribute donated goods, taught art to refugee children in a camp and helped in the Thessaloniki street kitchen.

When the women returned, they held a fundraiser and raised $3,000 to donate to groups helping the refugee situation.

Now the women aim to raise more money to help. This Tuesday, Dec. 5, they are holding a fundraiser at the Yellow Springs Brewery, where the brewery will contribute $1 for each beer sold. (See sidebar to this story for more details.)
Holyoke and Seidl hope their efforts not only raise money, but also educate villagers about the refugee situation.

“We want to keep it in people’s minds,” Seidl said. “It’s such a huge problem.”
Both women feel a personal connection to the refugee situation.

“There was something about it that grabbed me,” Holyoke said of the crisis. “It was so big, but it seemed there might be a way to help with it.”

Seidl’s involvement began even closer to home, in hearing about the experience of her mother, who was working to help refugees in her German town. A refugee herself during World War II, Seidl’s mother inspired her daughter to take action.

While others sometimes tell Holyoke that they could never put themselves in harm’s way as they believe she has done by traveling to the camps, she doesn’t believe she’s done anything out of the ordinary.

“We’re just normal people,” Holyoke said. “People sometimes say, we just don’t know what to do. But there are ways to contribute.”

Grateful for each dollar
Donations from Yellow Springers have already made a difference for those helping the refugees, the women say.

Of the $3,000 raised last summer, about a third went to the Soul Food Kitchen, the street kitchen run by volunteers who provide two meals a day for several hundred refugees living on Thessaloniki streets.

The money went to fix the kitchen’s van, without which they couldn’t buy supplies or deliver meals.

“She was so grateful to Yellow Springs,” Seidl said of the organization’s founder, Anja Tedesko. “She was grateful for every dollar.”

Last summer, Seidl spoke to Tedesko, and in response to questions, she provided the following information.

“The kitchen was built with the goals to have a permanent kitchen in Thessaloniki and bring warm meals every day to refugees and homeless people on the streets, camps and anyone else in need,” Tedesko said.

A small group of volunteers prepare the meals, which cost about 55 cents each.

“One thousand dollars are helping us a lot, but also 10 dollars are really important to us,” Tedesko said.

Asked by Seidl if anyone can volunteer, and what is a good time to volunteer, Tedesko responded:

“Anyone who is not afraid of hard working can volunteer and always is a good time.”
Describing her experience working in the kitchen, Francesca Brecha wrote:

“Another aspect that really struck me in my time was just how much difference a few hands or a few Euros can make. … Hearing what the kitchen spent per week on food was astounding. Everything in Greece is extremely cheap, especially when compared to the Boston prices I’ve had to adjust to in college (or Yellow Springs prices, for that matter). We are told all the time that every dollar we donate helps, but it’s hard to appreciate that until you see it in action.”

Other donations from the Yellow Springs contribution were: $900 for miscellaneous needs in the Lesbos camps where the Holyokes worked this summer, including soccer balls, markers and paper, a drill, a jig saw, and materials for building picnic tables and benches; $800 for a fund for purchasing art supplies for future volunteers and to the ERCI general fund; and $250 for life jacket bags for resale in the United States.

When the Holyokes returned to Lesbos this summer, there were two camps housing the refugees; one, Moria, is a large camp holding about 5,000 people in a space once used as a prison. A smaller camp mainly housed families in trailer-like boxes. Along with meeting the two boats of refugees, the Holyokes helped to patrol the perimeter of the camp, alerting authorities if someone (sometimes a smuggler) was trying to enter; built picnic tables and helped with other construction; and taught refugee children how to swim.

Fewer refugees from Syria are among those arriving in Lesbos these days, according to Holyoke, who said most she met were from Iraq, Afghanistan or Pakistan. People from the same country formed little neighborhoods in the camp and tended to stay with those of their own nationality, but the children all played altogether, quickly picking up each other’s languages.

For Beth Holyoke, her experience with the refugees was a lesson in gratitude and inspiration.

“The people who make these journeys are survivors,” she said. “It was amazing to me that they can be so resilient and so positive.”

And it was also a lesson in the commonality of human beings.

“People are so alike,” she said. “If you smile at them, they smile back.”