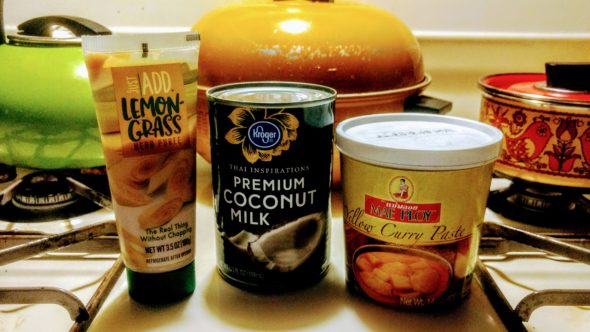 Some of the ingredients used in vegan Tom Kha-style soup — there is no photo of the soup as it was gone before I could get a snap. A good sign.

A Thai(-tanic) dish served with love

My parents’ pantry is pretty much always open to guests. My best friend Cherie likes to remind me of the time, post-college, when we were both living back with our parents for a short stint, and she came to my house. My parents had gotten one of those Vita-Mix blenders and Cherie was admiring it. So they got up from where they were sitting and made her a blender full of piña coladas, while imploring her to make herself at home and take anything she wanted from the fridge, freezer, cabinets, the dinner plate of their own first-born daughter, etc.

For the last couple of years, I’ve thrown myself a sort of belated birthday party and invited a handful of my women friends over for food, drinking and assorted light hooliganism. This year we decided to watch “Titanic” together over several bottles of wine, among other things — I hadn’t seen the movie for close to 20 years. For my friends, I made a variety of things, including a large — and experimental — pot of vegan Tom Kha Gai-style soup.

I feel, like my parents before me, the desperate importance of sharing food with people I care about. I want them to have free access to my cupboards and shelves while they’re under my care — except I can be a little stingy about my Cheetos sometimes. But apart from sharing the general largesse of your home, cooking for friends is a step beyond. I don’t know why, but a lot of my identity gets wrapped up in whether or not I can succeed in making someone else enjoy the taste of something I made. I feel like this is not an uncommon desire in the world, but I honestly don’t know why. At the bottom of it all, human attitude toward food is utterly utilitarian. As I have often said to my picky young daughter, “You don’t have to like it — but you do have to eat it.”

And yet, the desire is there — not only to feed, but to impress, and to be impressed. So I found myself trying to make a dish that I’d never made before. If you haven’t tried it, Tom Kha Gai is a Thai chicken soup flavored with various vegetables, fish sauce, coconut milk, lemongrass, kaffir lime leaves and galangal root. To make it vegan is easy: swap the chicken broth with vegetable broth, the fish sauce with soy and replace the chicken with a meat substitute or leave it out entirely. The hardest part is finding some of the more obscure ingredients — which I didn’t, by the way, and it made me feel like something of a fraud and a failure when the soup was done.

What is at the heart of that impulse, not just to feed, but to feed well? I can’t speak for anyone else, but I think cooking must be a kind of language, in a way. I don’t want to get too gushy about it, but it does mean something to stand in your kitchen for a few hours to make the food as good as you can because somebody you care about is going to eat it. It does mean something.

On the night of the party, we sat around watching young Leo DiCaprio and Kate Winslet run around proclaiming eternal love on a sinking boat — man, some parts of this movie just don’t hold up when you’re over 30 — and eating together. I don’t know for sure whether or not my friends enjoyed my soup — I feel it’s gauche to ask. But we were all feeling good, and having a good time. And at the end of the night, everybody agreed that we would do it again next year. When we do, my door, my kitchen — all of it — will be open to them.

Two tablespoons lemongrass paste (or more; it’s not as potent as fresh. You can use fresh if you want, but I didn’t want.)

Sautee onions and garlic in pot in oil of choice at medium-low heat for a few minutes. Add vegetable stock and lemongrass paste; bring to boil, then bring down heat to medium-low, stir and cook a few minutes. Add mushrooms, cook another 2 to 3 minutes. Add the cabbage, tomato, carrot and tofu and curry paste if using. Cook five minutes. Turn off heat. Add coconut milk and soy sauce, and lime juice if using. Garnish with cilantro.

(*I used a yellow curry paste by Mae Ploy that has galangal root and kaffir lime leaves in it, just because I had it on hand and because I couldn’t find those things in the store. It didn’t really add much in the way of those flavors, but it did give it a little kick. Also, a lot of people make this soup with bell pepper and with some chili pepper. I don’t like bell pepper and prefer to add spice to my soup with sriracha after cooking.)

*This column appeared in the Jan. 25 issue of the YS News.