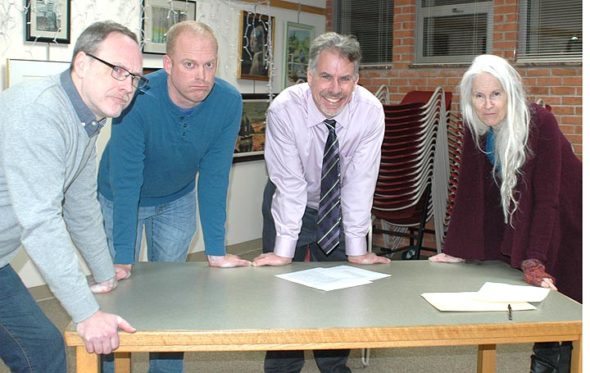 Seven plays, 10 minutes each. A military farce. A spaghetti western. Three women facing up to their lives. Four friends who are no longer friends.

“It’s kind of a Yellow Springs secret,” she said. The festival draws a supportive local crowd of family and friends, she added.

This year’s performances are held Friday and Saturday, Jan. 26 and 27, at 8 p.m. at First Presbyterian Church. Tickets are $10 at the door.

The duo has produced the annual 10-Minute Play Festival since 2014, taking over from Kay Reimers and Center Stage. It’s fun, but a lot of work, both women agree.

“Like herding cats,” Eckenrode Saari said, with a laugh.

The 10-Minute Play Festival serves as a fundraiser for Yellow Springs Theater Company, or YSTC, the community theater group that in recent years has revived Shakespeare productions in the village. And by virtue of its succinct format, the festival also serves to attract new actors, writers, directors and audience members to local theater, as well as offering a different kind of creative outlet for community theater veterans.

“It’s the baby pool,” Thomas said, contrasting a 10-minute play with the commitment of a full-length production.

But that’s not to say it’s easy.

Villager Carol Stoner, a law professor and poet, had never written a play before. But she’d been storing up ideas for years. And when she saw YSTC’s call for submissions last fall, she thought, “I’m just going to do it.” She drew on her many years of commuting on a Connecticut train to write “Bar Car.” Eckenrode Saari helped her whittle the 25-minute script down to a 10-minute play that focuses on its characters’ small and large self-deceptions.

Another play in this year’s line-up is “Juice,” by Jo Terrell, a Dayton theater producer who this year was hired as theater arts producer for Yellow Springs schools. Terrell’s play is excerpted from a longer script, and the shortened version involves three African-American women in their thirties addressing the “juice,” or real issues, of their lives. Themes tackled include religious belief and domestic violence.

The title draws from a line in the play, “Juice is thicker than tea, but just as sweet.” According to Terrell, “tea” is the casual, frivolous talk that women sometimes engage in, while “juice” is the tougher stuff. The play is “very edgy,” with language meant to challenge the audience to think and react, she said.

By contrast, villager Jeremy Holtgrave’s play, “The Major, the Colonel, the Captain and the Contractor,” is “total satire,” according to Holtgrave, a former military officer who now teaches physics at Central State University. The 10-minute tale of military and government buffoonery may be farcical, but it draws on actual situations from Holtgrave’s two-decade military career.

“I cannot write comedy better than real life,” he confessed.

And that real-life grounding gives the play a slight edge, according to director Ali Thomas. (Like many involved in the festival, Thomas wears multiple hats as producer, director and actor.)

Holtgrave contributed a play on a similar theme last year, and he and his wife, Amy Magnus, previously co-wrote another play for an earlier festival. Magnus has her own original play in this year’s line-up, “Good Riddance,” a dark comedy about the unraveling of a friendship among four friends after one friend breaks up with her fiancé.

“It’s a look at the choices we make” in social situations, Magnus said. “Sometimes we speak in approximations, and those approximations can get us in trouble.”

She was spurred to write the play, which is based on an episode from her own life, after acting in YSTC’s fall production, “Fefu and Her Friends.” Magnus called that experience a “master class” in dialogue and the complexities of social interaction.

Rounding out the festival line-up are “Pizza Western,” an absurdist spoof on the spaghetti western genre, by 2012 Yellow Springs High School graduate Colton Pitstick; “Courtesan Lady Helen de Fortiscue,” by local poet and English professor Anthony Fife, featuring an inept playwright giving a curtain speech (the play’s complete title is comically convoluted); and “Exceeding Purchasable Calories,” by Los Angeles playwright Rhea MacCallum, about a female grocery customer who is told she has exceeded her “purchasable calories” for the month.

According to Thomas, the festival producers received 13 plays from across the country for consideration. With an emphasis on local talent, they chose mostly local pieces. MacCallum is the only non-local writer in the line-up; her play was simply too good to pass up, Thomas said.

One challenge the producers face is finding the right sequence for such wide-ranging material. And then there are set changes, which have to happen fast. “Under a minute,” Eckenrode Saari said. Sets and props are minimal, facilitating quick changes.

“There’s an energy that builds if there aren’t space between the pieces,” Thomas explained.

Rehearsals are taking place now at locations all over town. For example, on a recent night at the Yellow Springs library, Thomas, Holtgrave (who has a role in his own play), Kevin Mulhall and first-time performer Sam Butler were rehearsing “The Major, the Colonel, the Captain and the Contractor.” It was their first night “off book,” or without reading lines, but after a couple false starts, the play was off and running. And the actors seemed to be having a blast.

“This is the most unfettered fun I’ve had as a grown-up,” Holtgrave said.

Eckenrode Saari said she hopes audiences, too, will enjoy the “fun and energy” of seeing local pieces by local performers. “There will be a lot of laughter,” she predicted.

And the range of plays means that if one  piece doesn’t resonate, another one might, Thomas said.

“We can’t develop a single theme,” she said. “But we can throw a lot at you.”