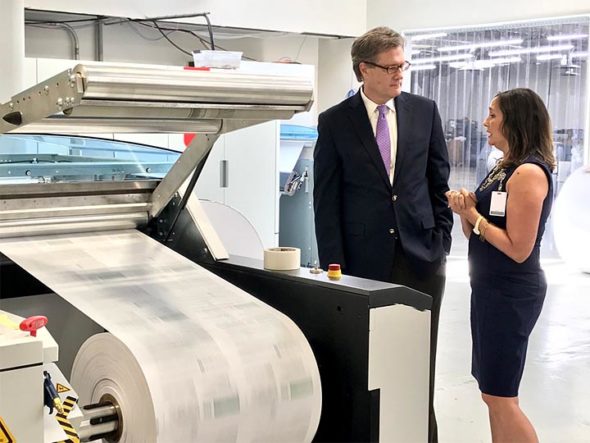 On Monday, May 15, 2017, U.S. Rep. Mike Turner visited DMS ink corporate headquarters on Dayton Street. The visit included a tour of the offices and production facility followed by a meeting with company owner, President and CEO Christine Soward. (Submitted photo)

The addition of DMS ink to the local business community, by all appearances, has been a positive move for the company and Yellow Springs.

The direct-mail-service and printing  company is marking two years since taking ownership of the former Antioch Publishing building and property on the west edge of town, relocating its headquarters and a majority of its workforce from its longtime home in the city of Dayton.

“Our facility here in Yellow Springs is probably one of the best choices we could have made from where we moved in downtown Dayton,” Gery Deer, communications director for the company, said in a recent interview.

“In terms of the layout and the availability of the space that we’re using and how we’re able to set up our workload and our processes, this facility has been fantastic,” Deer said, speaking on behalf of DMS ink President and CEO Christine Soward, who was not available to speak with the News for this story. Deer said Soward has been especially busy with the start of the new calendar year, including leading employee trainings in new marketing and customer-service software.

For the Village’s part, the local presence of DMS, which initially brought with it about 60 employees and “immediately became one of our largest employers,” is a clear win for the community, according to Karen Wintrow, executive director of the Yellow Springs Chamber of Commerce and past president of Village Council.

“They’re very involved and vested in the community,” Wintrow said. In addition to the financial impact of property and employee tax revenues, DMS has become an active member of the Chamber.

“They’ve done a promotional video for us about doing business in Yellow Springs,” Wintrow said, and Deer recently joined the Chamber’s Board of Directors. In addition, Soward is scheduled to be on a speaker’s panel at the Chamber’s annual meeting this month, Wintrow added.

Village leadership and the county’s development office actively wooed the company to town two years ago, with the Village and County Board of Commissioners both unanimously approving a tax-abatement agreement for a planned expansion of the 95,000-square-foot building at the northwest corner of Dayton Street and East Enon Road.

The tax deal, known as an enterprise zone agreement, only applies to the company’s intended building expansion. DMS has continued to pay the full $20,000 a year in property taxes on the existing structure’s $700,000 valuation.

According to the county’s director of development at the time, Pete Williams, that tax revenue is divided among six local and county entities, including Yellow Springs schools.

The tax abatement would come in the form of a 75 percent reduction in the amount collected, over a 10-year period, from the company’s planned $1.5 million, 50,000-square-foot expansion. Facing an estimated $40,000 annual additional tax bill before abatement, the company would save about $30,000 a year, or about $300,000 over the 10 years of the agreement, according to Williams.

The company currently receives no tax abatement, however, as work on the expansion on which the agreement is based has yet to begin.

Communications Director Deer said the local expansion plans are on hold as DMS leadership decides the future use of its facility in Dayton, which is still in operation with limited staffing.

In the meantime, the company has met its employment commitment, according to the county’s current development director, Paul Newman, who succeeded Williams in 2016.

According to Deer, the workforce total near the end of January 2018 was 97, with about a dozen working in Dayton and the rest in Yellow Springs. Two villagers have been among the 20-some new hires since the move, he said.

The enterprise zone agreement, however, stipulated that the building expansion project begin no later than Jan. 1, 2018, the county’s development director said. Advised that the deadline would not be met, Village Council and the County Commissioners both unanimously passed resolutions in May 2017 amending the agreement to allow DMS ink to delay the start of construction by one year. The conditions for the abatement period, now set for Jan. 1, 2019, through Dec. 31, 2029, remain the same as previously set.

In January 2016, Chief Operating Officer Tom Cooper told the News that DMS ink could handle printing runs ranging from 25 documents to more than a million. In an interview that June, Soward said the company could produce 60 million pieces of mailing per month.

Founded by Soward’s father, Robert Hale, in 1984, the company began as a fairly straightforward mail house. Soward, 18 years old at the time, quickly became involved in the venture, learning the business from the ground up, before eventually buying the enterprise in 2005

Under Christine Soward’s leadership, DMS ink’s annual revenue increased from $2 million in 2008 to more than $10 million in 2015, according to the Dayton Business Journal.

Soward told the News in 2016 that she expected the company’s production to double with the addition of and move to the Yellow Springs site.

Since relocating, DMS ink has been focused on upgrading its software, Deer said last month.

“We’re process driven here, so it’s very important that our software meet our needs,” he said. “We’re in the middle of overhauling our systems and training our people to operate them.”

This past June, the company also introduced a new generation of inkjet printing equipment at its YS facility.

“We partner with Canon Solutions America, and they held their technology event here last year,” Deer said. “They chose us because this facility and the way we do our operations is a model for what they’re trying to do around the country with inkjet technology.”

Despite the Internet and the preponderance of laptops and smart phones, the print industry stands on pretty firm ground, Deer said.

“What’s happened in the [direct-mail] industry is that millennials  are opening the physical mail — the postal mail — 70 percent of the time. … So if that’s the group you’re trying to hit, then the direct-mail and personalized relevant communication — critical communication — that’s where the industry is really going. So it’s pretty solid.”

He cited a 2017 study by the U.S. Postal Service that found millennials were opening their mail because they liked holding a tangible piece of paper in their hands.

“The postal system concluded that we’re suffering from digital fatigue where everything is being fire hosed at us on screens,” Deer said. “So we’re happy to have that tangible piece of paper.”

Also last year, for the second year in a row, the company was among the nominees honored in the Dayton Business Journal’s “The Business of the Year Awards Program.” DMS ink was nominated under the categories of “Women Owned Business” and “Minority Owned Business.” And last May, again for the scond year, DMS ink and Soward, who was born in the Philippines, were named by the US Pan Asian American Chamber of Commerce Education Foundation (USPAAC) as one the country’s Fast 100 Asian American Businesses.

DMS ink also was recognized last spring by Greene County Community Improvement Corp. for its role in bolstering economic vitality. And the company recently launched a YouTube channel that focuses on digital information.

On Wednesday, Feb. 14, the Ohio affiliate of the Prevent Blindness organization will honor DMS ink and Soward for philanthropic work at the Annual People of Vision Award Event.

Deer said that from his and the company’s perspective, Yellow Springs has been very welcoming, and the employees who commute here are getting to know the community.

“We’ve tried our best to have our employees use the facilities in town, whether it be the grocery store or any of the other businesses,” he said. “My wife and I work out of this building, so we’re here in Yellow Springs a great deal.”