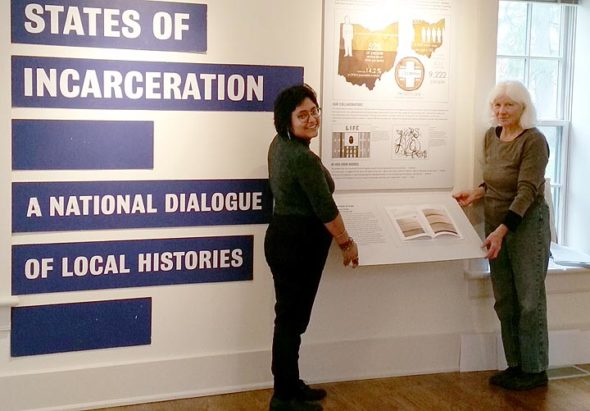 “How much time is too much time?”

That question has emerged as a central concern for Antioch College students studying prison-related issues this year.

And it stands as the thematic focus of Antioch’s contribution to a national traveling exhibit and story exchange project that explores the history and future of mass incarceration in the U.S.
Titled “States of Incarceration,” the national exhibit was put together through a coalition of 20 colleges and universities working in collaboration with formerly incarcerated individuals from 30 communities across the country.

Antioch is the 21st school to join the ongoing project, and the exhibition’s current display at Antioch’s Herndon Gallery, which runs through June 2, is its first, and so far only scheduled, stop in Ohio. The traveling portion of the show went on view March 29, and the local component will go up before the opening reception Thursday, April 12, 7–9 p.m., at the gallery.

Antioch’s contribution also brings the voices of currently incarcerated women into the conversation.
“Our task was to ask a unique question and answer in a local context,” said Antioch Assistant Professor of Cultural Anthropology Emily Steinmetz, who was teaching a Critical Prison Studies course on campus when the opportunity to participate in the national project arose.

That was this past fall, when the class was regularly going to Dayton Correctional Institution, or DCI, and meeting with some of the women incarcerated there.

Steinmetz had already forged a relationship with DCI, having for the past four years led a spring quarter class at the women’s facility comprised of both Antioch students and imprisoned women, many serving life sentences.

About 80 women at DCI, of more than 900 incarcerated there, are currently serving life sentences, while at the larger Ohio Reformatory for Women the number is closer to 200, Steinmetz said in a recent phone interview. According to Steinmetz’s research, parole is limited to about 4 percent.
Issues that affect women incarcerated with life-time terms particularly galvanized her class, Steinmetz said. Hospice and end-of-life care, inequalities of sentencing and parole, the differences and evolution in federal and state laws were all points of study that led to the collective question: “How much time is too much time?”

In preparing the work for inclusion in the national project, the students also consulted with a group of so-called “lifers” that meets regularly at DCI, Steinmetz said. Some of their words are included, with pseudonyms, in the resulting large, informational panel that accompanies the traveling exhibit.
The interactive multimedia exhibit includes similar panels, with text and photos, from each of participating schools, as well as audio and video clips featuring personal stories; booklets; and other informational materials.

There is also space to sit, talk and write in a move to prompt reflection and conversation around the issues.

The local exhibit also will feature a collection of painted portraits by Aimee Wissman, of Columbus, who until December was incarcerated at DCI. The portraits feature women affected by violence.
Another woman formerly incarcerated at DCI, Antioch student Mary Evans, is curating Wissman’s paintings and writing descriptive cards that will accompany each.

Evans, who was released last June after serving seven years on a drug-related charge, started classes at Antioch this school year. She earned enough college credits while incarcerated that she was able to enter Antioch as a sophomore.

She points to Assistant Professor Steinmetz’s “inside-outside” class as giving her the inspiration to think that she could even consider going to college.

“I’ve been blessed” in being able to build a new life in Yellow Springs, she said in a recent phone interview. “I just want to be a better human being,” she added.

At the same time, she said the opportunities for rehabilitation while serving time — especially lengthy sentences — are limited.

“Incarceration is not built for you to get better,” Evans said.

And it doesn’t necessarily serve people on the outside either, she noted. In the act of imprisoning someone who perpetrated a crime, the justice system is also locking away every skill, talent and ability that person has, which might be a benefit to society. Evans said she thinks of a friend still on the inside who has the most amazing singing voice she ever heard. The world is being deprived not hearing her, she said.

Given her own incarcerated past, Evans said “it’s mind-blowing” for her to think that she’s now enrolled at the same college Coretta Scott King attended. That legacy inspires her to persevere.
In addition to her full-time course load, Evans is working two jobs — at the Wellness Center and at WYSO, where she helps put together the podcast Antioch Word. In connection to that States of Incarceration project, she’ll have a booth set up at the exhibit’s opening reception on April 12 to collect stories for a future podcast. She also will be present to talk about the project.
Other activities are planned for the April 12 reception as well, according to Herndon Gallery Coordinator Jennifer Wenker.

Antioch senior Odette Chavez-Mayo is creating a series of photo portraits of women with life sentences that will be included in the local display, Wenker said in a recent interview. Each portrait includes an object that has personal significance to the woman featured, Wenker said, describing the results as “moving” and “powerful.”

Outside members of the DCI inside-outside Hope Thru Harmony choir, directed by villager Catherine Roma, will sing a piece requested by the inside members.

And students of Steinmetz’s fall class also will be on hand to share their research and book donations for Antioch’s books to prisons project will be collected and packed for distribution.

A variety of events are planned during the exhibition’s run, Wenker said, adding that he gallery will welcome other related programming that arises as a result of the show as well.

• Restorative Justice Conference, closing events and reception: June 1–2, details to be announced.
Engaging in a local and a national conversation is “part of the point of the national exhibition,” Steinmetz said.

Gallery hours are noon to 5 p.m. Mondays through Fridays and 1 to 4 p.m. Saturdays. For more information, contact Jennifer Wenker at jwenker@antiochcollege.edu or call 937-319-0114.