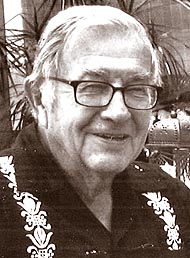 Bill Mullins died exactly the way he had planned and wished for, but was afraid might not be. His requests were to the point and quite clear.

“I want to die at home, quietly, free from pain, with my children and grandchildren close by.”

And so it was to be, exactly as he wished. Years before, we began confronting our mortality. Family and friends gave the extra nudge we needed to start the paperwork, making decisions about our “end of life” journey.

Bill was an extraordinary man, in ways perhaps surprising to even his closest friends. He was a man before his time — a person who rarely worried about what others might think. He wore Bermuda shorts, sandals and grew a beard when no one else did at his school in Iowa. Later on, he shared parenting chores, including changing diapers and the night-shift bottle duty. He did what he thought was fair.

He never wavered from being open to new ideas, supporting his children’s dreams, encouraging his students to reach higher.

Bill was born to Esther Silva and Frederick Parsons Mullins in Salem, Ohio, a year after his parents married and a year before his sister Mary was born. The children entered Kindergarten together and were close friends all through their lives — school, weddings, children’s births — until “Sissy” (Mary) developed early-onset Alzheimer’s, ending her struggle 15 years later. Her husband, Jerry Boyd, and their eight children were devastated. So was Bill, but he rarely spoke about it. Bill was an intensely private person, and sharing his personal feelings was difficult.

At 18, Bill left his school, Hotchkiss, before graduating. He joined the Merchant Marine, knowing his poor eyesight and asthma would mean a state-side desk job if he were drafted into World War II. Instead, he became a radio operator, serving in dangerous situations with little protection. Twenty years later, he moved next door to Leon Holster, who had also enlisted in the Merchant Marines and was the radio operator on his ship. They became fast friends, appearing in many Gilbert and Sullivan productions at Center Stage.

He attended Yale, dabbling in several fields of study before realizing that all he ever really wanted to be was a teacher — an elementary teacher, at that. A young man from a wealthy family does not attend a private boarding school and Yale to become an elementary school teacher. A lawyer, an investor, a doctor perhaps, but definitely not a teacher of young children.

Luckily for thousands of children, he followed his dreams, albeit in a roundabout way. First, he was offered a job tutoring the son of one of the Vanderbilt families while they took an around-the-world, year-long trip. The family’s twin daughters were anticipating their upcoming birthday celebrations. Bill signed on the dotted line and prepared to teach at sea.

Sadly, one of the daughters decided to get married instead, and the trip was canceled. However, as Bill had cleared his calendar for an entire year, the Vanderbilts agreed to pay for a master’s degree program at Harvard, which Bill had requested as an alternative.

Of course, a Yale man going to Harvard was an insult to family and Yalies in Salem.

After the Harvard years, he wanted to study with two teachers at the University of Iowa in Iowa City. There, professors encouraged him to pursue a Ph.D. in education. Bill spent the next several years teaching sixth grade at the University Lab School while taking classes on evenings and weekends.

Bill and I saw and talked to each other at the Lab School during my six-month student teaching requirement. Every morning, our conversation went like this:

“Mr. Mullins, will you please unlock the music room door? I’m early and want to set up the room.”

Clearly annoyed, irritated or sometimes downright rude, he would personally unlock the door, not wanting to trust me to return the keys. What a creep!

Then, one day, Bill asked a friend if he knew anyone who might play tennis with him — meaning a girl, on a blind date. His friend said that he knew someone who would play tennis with anybody. We laughed at meeting each other for the “first” time. The tennis was mediocre — but the chemistry was magical.

Summers in Iowa are famous for being hot and humid. Whether that was a factor or not, we fell in love, told our parents, were married six weeks later and began our life together.

His Ph.D. in hand, Bill accepted a job at The University of Minnesota, ostensibly to teach others how to teach. He hated it and lasted just two years. Then the University of Iowa offered him a job he couldn’t refuse: small classes with a real chance to make a difference in educational practices.

Wrong, wrong, wrong. A change in administrators, a revised curriculum and he was back to lecturing to classes with over 100 students. He hated it.

One day, Bill and his colleague, Bev Price, attended a conference on educators in Chicago. There, they met Louis King and Philip Rothman from Antioch College. There was an urgent need for two superior teachers at The Antioch School, a small, private school based on outdoor play time, cooperation, a child-centered curriculum and respect for each other. Both teachers would also serve as adjunct faculty at Antioch College.

So the die was cast. We packed up our belongings, baby girl and new puppy and headed for Yellow Springs, Ohio. By the way, I was not thrilled with the decision made without my input. I had an orchestra of gifted string players. We traveled around Iowa and also gave a “communal performance” for the Boys Clubs of Chicago. I was not looking forward to leaving Iowa City.

However, Bill and Bev took to Antioch with joy and vigor, using creativity to plan for the future. Bill loved teaching the way he wanted, trying ideas about conquering fears. Snakes, tarantulas, mice and other critters shared space in the Older Group’s room. Bill sang and taught songs others might deem inappropriate; he bought a unicycle, put it in the corner and waited to see what would happen. What happened was that everyone wanted to learn. And yet, he was “old-school” enough to pull a student’s hair without a why or wherefore.

He was a changed man because of Yellow Springs, the college and Antioch School, with its free-thinking, intelligent, risk-taking inhabitants. He embraced folk dancing, the Unitarian Fellowship, barbershop quartet, Center Stage, gardening and a myriad of other endeavors. I found my own path — happiness and fulfillment through music, children, teaching, writing and becoming a true Yellow Springer.

He could be hard on himself, too. Last October, he put a complicated math problem on the board, looked at it, realized he couldn’t solve nor explain it, turned to his students and said, “Well kids, I guess that’s it,” and left the room, never looking back. That was quintessential Bill.

I miss the old boy, my partner through the good and bad, my best friend, my love. May he keep teaching through his former students for eternity.

A memorial announcement is forthcoming.