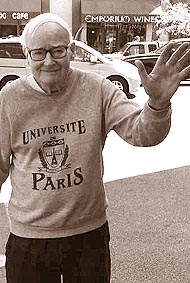 A descendent of early settlers to New England, Pennsylvania and Ohio, Sam was born Richard Samuel Bachtell to Marie Dunlap and Myron Ansel Bachtell on March 30, 1926, in Wooster, Ohio. His father, an Ohio State University agronomist, manager of Ohio’s experimental research farms and author of “Timely Soil Topics,” was based at the land grant Ohio Agricultural Research and Development Center, or OARDC, in Wooster. His mother, a woman of probity and forbearance from Urbana, Ohio, raised him and his sister, Nancy, while his father made weekly tours to introduce the state’s farmers to the latest agriculture methods.

As a child, Sam watched Goodyear’s dirigibles and blimps float along the horizon; years later, he worked for the company as an aerospace engineer. He worked summers as a census taker in experimental tree growth stands at the OARDC and learned about farming practices by accompanying his father on the job.

An avid naturalist, Sam took his family on hikes and camping trips, planted and cultivated trees, loved to identify constellations and exercised his ability to classify birds by call, markings and behavior. He was at once in thrall to logical arguments and problem solving, and a great appreciator of art and serendipity.

Sam may have been the artist he did not know: the reserve of a man smoking a pipe in his den frequently gave way to the spirit of a natural photographer or wry storyteller; a compulsion to alphabetize his spices was balanced by the simple joy of cooking; a placid demeanor was interrupted by a booming “Hah!” and an obsession for chasing fires; a supremely confident man would suddenly admit he had been forever traumatized by the Lindbergh baby kidnapping.

He displayed an obvious passion and love for his wife Mary Jane, a gifted writer and artist; a joy in sharing books, music and movies; and an exuberance for tennis, travel, and dancing. As his friends and acquaintances would attest, he was a great dispenser of banter and hugs.

Sam’s own positive experience in the Wooster public schools led to a lifelong advocacy for education. He served a term on the school board in Hudson, Ohio, was the Yellow Springs schools levy treasurer for over 30 years and maintained a strong interest in the life and health of Antioch College.

Upon graduating high school in 1944, Sam enlisted in the U.S. Navy. He was eventually sent to radio training school and served a tour of duty repairing patrol boat radios in Guam. After the war, Sam attended the College of Wooster and MIT, in 1951 earning a Bachelor of Science in electrical engineering. He met and fell in love with Mary Jane Smirt at the College of Wooster. They were married in 1952.

Sam joined Goodyear Aerospace in 1955. Spurred by an emerging social consciousness in postwar America, he and Mary Jane remained close to a group of Protestant ministers who had graduated from Wooster and fell into social movements with likeminded people of their generation.

This led to involvement with Fair Housing, the League of Women Voters for Mary Jane, the Inner City Protestant Parish in Cleveland, and efforts to integrate local swimming pools and neighborhoods. Upon the death of the peace and civil rights activist William Sloane Coffin, the late Andrew Patner, Sam’s son-in-law, described the spirit of the period: “It was a reawakening of Protestant ethical and moral traditions that had lain dormant in many ways for some time … And it was also done, at that time and by these people, with a uniquely American sense of humor and a frequent lack of self-righteousness even in such serious and momentous times.”

An opponent of the Vietnam war, Sam left Goodyear because of its role as a military contractor. He worked as a systems engineer for Westinghouse Learning, and moved his family for brief stays in Pittsburgh and Albuquerque. He expressed a lingering sense of guilt for repeatedly uprooting them but Mary Jane and his children all admitted to relishing exploring new places and cultures.

He retooled himself in computing, and eventually allied with his old friend Chuck Colbert in forming the Clinical Radiology Testing Laboratory in Yellow Springs in 1972. He and Colbert developed a process for bone mineral analysis by scanning radiographs. The laboratory thrived and was eventually sold to Merck Pharmaceuticals.

Sam and Mary Jane felt they had arrived to their spiritual home in Yellow Springs, and embraced the community in all its diverse, progressive character. After Mary Jane’s death in 1983, Sam established the Mary Jane Bachtell Creative Writing Award and volunteered for Center Stage, Chamber Music Yellow Springs and the GEM Scholarship Committee. He became a dear friend to Joan Ackerman, who shared his interests in family, community activism, travel and culture.

Sam relished riding his bicycle on the Yellow Springs bike trail and did so into his 90s, along with regular visits to the Antioch Wellness Center. He helped create the Yellow Springs Design Advisory Committee as well as Community Resources — to help guide commercial development and growth in Yellow Springs and insure a tax revenue base for the village. The fruits of these efforts can be seen in the recent arrival of Cresco Labs, the medical marijuana facility established by Charlie Bachtell, coincidentally a distant cousin.

Sam is survived by Joan Ackerman and her family; sister Nancy, brother-in-law Web Lewis and their children, David and Steve; daughter Barbara, her husband Alan and their children, Avery and Ethan; son John and his children with Terrie Albano, Aidan and Winona; and son Tom (and Andrew Patner, dec).

The Bachtell family wishes to thank the many friends and social service workers who cared for, visited and comforted Sam in his last days. He developed a special bond with his friend and caretaker, Amy Ballow, who invoked Ojibwa lore during his last moments: “Now you can cross the star trail, Sam.”

In honoring Sam’s commitment to the Yellow Springs community, contributions in his name may be made to the local nonprofit of your choice or the Mary Jane Bachtell Creative Writing Endowment at the YSCF.