The physics of the Force at Little Art 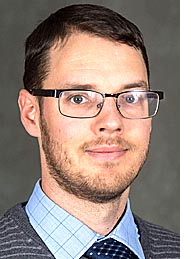 Physicist and author Patrick Johnson, who grew up in Yellow Springs, will speak at the Little Art Theatre this Sunday, May 27, at 1 p.m. (photo by Phil Humnicky, Georgetown Univ.)

“Star Wars” fans who have mused about whether or not working light sabers and blasters will ever be available for purchase on Amazon are in luck: Patrick Johnson, author of “The Physics of Star Wars,” will be at the Little Art Theatre on Sunday, May 27, to talk about his book and the possibility of the seemingly impossible portrayed on-screen in the “Star Wars” films.

Johnson, a physics professor at Georgetown University, grew up in Yellow Springs; his parents, Patricia Hart and Eric Johnson, are still residents. He said this week that he’s been a “Star Wars” fan since childhood, and that writing the book was something of a dream come true for him — though it was one that came true sooner than he thought: “This was something I thought I might do later in my career, when I’m more established as a physicist,” he said, “but when the opportunity arose, I had to take it.”

That opportunity came just a few years after Johnson obtained his Ph.D. at Washington University in 2012. Johnson produced a series of videos through Georgetown University in 2015 talking about the science of “Star Wars” leading up to the release of “The Force Awakens” in December of that year. Publishing house Simon and Schuster contacted Johnson in the wake of these videos and asked him to write a full book on the subject — and the rest is galactic history.

Johnson clarified that he wouldn’t consider himself a “super-fan” — such fans are notorious for lovingly nitpicking the intergalactic intellectual property to the bone; a quick Google search will yield hundreds of articles and videos meticulously documenting any inconsistencies in the nine “Star Wars” films that have been released so far. From his perspective, however, Johnson said it’s not his job to critique the science that appears on-screen in a “Star Wars” film.

“Let’s give them the benefit of the doubt,” he said. “Let’s assume that what is shown on screen is perfectly legiti 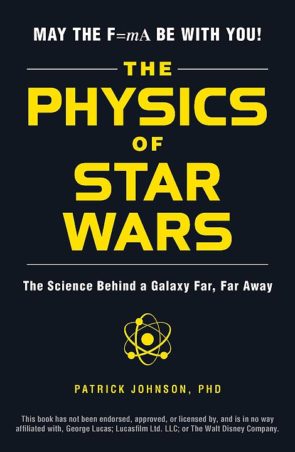 The Physics of Star Wars

mate.” This mindset was, ultimately, his guiding force when writing the book: “What can I do, as a scientist, to show how [what’s on screen] can be legitimized? Let’s figure out how to explain what’s on screen — even if no thought was put into the science when the film was being made.”

Understanding, as previously mentioned, the tendency of fans to point out factual disparities, Johnson did employ a “Star Wars” fact checker before the book went to print: his partner, Susan Tyler, whom he did describe as a “super-fan,” helped keep him on track when it came to the lore of the famous galaxy far, far away.

On the topics of these known errors — which this writer was too polite to ask him to pinpoint — Johnson said he’s fine with critical feedback.

“If I’m being 100 percent honest, there are lots of people who know ‘Star Wars’ much, much better than I do, and I welcome people offering their thoughts.”

Johnson said it’s these people he encourages to read his book — even if they don’t have a background in physics. “Obviously if you like physics, that’s a plus,” he said, “but I didn’t want the book to be inaccessible to people who don’t. You do have to be a ‘Star Wars’ fan, though — otherwise you’re just not going to get much out of it.”

The book is structured to make the concepts Johnson outlines as easy to follow as possible: each chapter tackles a different subject, such as space travel, handheld weaponry and robotics, and each chapter is broken down into subsections that deal with the background on, for example, hyperspace, blasters and droid mobility. Johnson writes about how each of these things might be achieved using his knowledge of physics in their on-screen world — then tackles how possible they are in the real world.

“There are things on screen that we can actually do right now,” he said. “In physics labs, we have things like beams of plasma, like the Large Hadron Collider, that can send a beam of plasma out” much in the way the Death Star or Starkiller Base did in the films.

Technology naturally takes precedence in the book, but Johnson also makes time to ponder the supernatural by dedicating an entire chapter to The Force, a spiritual telekinesis employed by some “Star Wars” characters.

“I acknowledge that magic brain powers don’t exist in our universe,” he said. “But if you could manipulate electromagnetic fields with your mind, you could do something like what is depicted in the films — and I acknowledge that’s a big ‘if.’”

Magic brain powers notwithstanding, Johnson concedes that most of what appears in the “Star Wars” films is light years — parsecs? — away for Earth, but that he’s not giving up hope.

“I’m not saying any of it can truly be done — the engineering challenges would be beyond the scope of human study. But in 200 years — who knows?”

The event is free, but those interested are encouraged to reserve a free ticket in advance via email at littlearttheatre@gmail.com. When requesting, be sure to mention the name of the event and how many tickets should be reserved. Following the event, Johnson will head to Dark Star for a book signing.