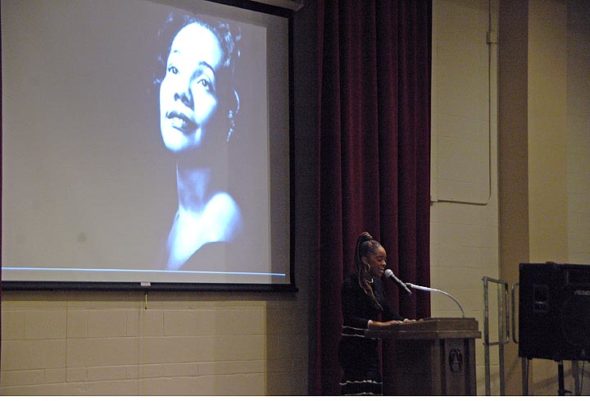 Tamika Mallory, co-president of the Women’s March, stands in front of a projected photograph of Coretta Scott King, Antioch alumna. Mallory gave a talk at Antioch College on April 26, the day after she received the second annual Coretta Scott King Legacy Award. She told the audience that the struggle for civil rights continues and that fighting systemic racism is everyone’s responsibility. (Photo by Megan Bachman)

“Struggle is a never ending process. Freedom is never really won, you earn it and win it in every generation.”— Coretta Scott King

Evoking the words of the late Coretta Scott King, Tamika Mallory, co-president of the Women’s March, in town to accept an award in the Antioch College graduate’s name, told a local audience that fighting systemic racism is everyone’s responsibility.

“That was the light bulb — it’s on me,” Mallory said of King’s words.

The struggle against social injustice to which King referred is perpetual, “not a thing of the past,” Mallory added, enjoining audience members at her talk at the Antioch’s South Gym on April 26 to step up and do more to combat racism.

“In this day and age, corporations and local police departments have become as dangerous as the lynch mob with their white hoods,” Mallory said. “Instead of Emmett Till we have the Stephon Clark. Instead of mass lynchings we have mass shootings. And the struggle stays the same over and over again and we have the responsibility of winning it in every single generation.”

Mallory urged listeners to educate themselves on the current manifestations of racism — including police brutality, mass incarceration and economic inequality — embrace intersectionality in the women’s rights movement and organize their families and communities for political change.

“Sitting on the sidelines is part of the problem,” Mallory said.

Mallory spoke a day after receiving the second annual Coretta Scott King Legacy Award for her outspoken activism on various social justice issues and her role as one of the four co-founders of the Women’s March on Washington. That national protest against incoming President Trump on January 21, 2017 was the largest single-day protest in U.S. history, according to the U.K. Independent. Last year the inaugural prize went to Eleanor Holmes Norton, a 1960 graduate of Antioch who was a longtime civil rights lawyer and politician.

Mila Cooper, director of the Coretta Scott King Center at Antioch, said Mallory was chosen because the 37-year-old New York native is a fearless and selfless young activist and the Women’s March she now co-leads with a white woman is an “amazing group that we wanted to honor.”

“She is very outspoken and I admire her consistency in terms of speaking out on issues that matter to her and our community,” Cooper said.

Despite her age, Mallory is an accomplished activist, having started working at the Rev. Al Sharpton’s National Action Network at age 15 and moving up to become the group’s youngest executive director at 28. She also helped create the NYC Crisis Management System, a gun violence prevention program and advised the Obama Administration on gun control legislation, according to her website.

Also receiving awards at an April 25 luncheon in Dayton were Antioch assistant professor of history Dr. Kevin McGruder for his work at Antioch and in Yellow Springs; Shondale Atkinson-Dorise for her creation of The Mustard Seed Foundation; and Lela Klein of the Dayton Union Co-Op Initiative and Amaha Sellassie of the Dayton Human Relations Council.

Several times throughout her talk, Mallory directed her words to white audience members and specifically to white women in attendance, telling them to do their own research and not lean on people of color to educate them about issues of race.

“It is extremely tiring for us as people of color to be consistently explaining and educating and bringing folks along while we are fighting for our lives — it’s a lot of work,” Mallory said. Denying that racism persists or feigning ignorance is disingenuous, Mallory added.

“If you wanted to know, you could know,” Mallory said.

Mallory also advised white people and others with privilege to not expect other people to to solve racism and injustice in general, saying “we must be the ones who raise the most hell.”

“We should use those same things that qualify us as some of the most elite in our society to be why we are the biggest threat to injustice,” Mallory said.

Mallory went on to describe the “painful conversation” she has to have with her young adult son before he leaves the house in a country where black men are regularly the targets of police shootings. Mallory instructs him to not talk back to officers, put his hands where they can see them and sometimes change his clothing or appearance.

“His mother is an activist who says, ‘stand up, speak up, fight back’ but I’m telling my son ‘lay down, don’t talk, put your hands up, get out of the way and don’t say anything,’” Mallory said. “I demoralize him before he leaves the house.”

Pivoting to the role of white allies in supporting anti-racism work, Mallory asked white people to start the conversations on race with family members, coworkers and community members that black people cannot have without fear of retribution.

“If I have to have that conversation with with my son which is incredibly painful, you can’t tell me you can’t ask your mother who she voted for,” Mallory said.

Mallory added that such conversations may be uncomfortable for whites but are part of a proactive strategy needed to combat systems of oppression. She called on people “of good moral conscience” to begin organizing their families and communities, standing up to elected officials who are not addressing social justice issues and voting in politicians who will.

“Instead of being reactive, the offensive strategy is to organize our local communities,” Mallory said, pointing to the importance of the midterm elections in November.

In the audience, Mallory’s words resonated with Felicia Chappelle, who was impressed with the speaker’s “generosity, intelligence, fortitude, tolerance and honesty,” she wrote in a message.

“When she spoke, so clearly and so bravely, I knew I had no more excuses,” she wrote.

MJ Gentile found Mallory “fierce and engaging,” Gentile was encouraged to step up and have more conversations with other white people about racism.

“I left feeling energized and compelled by the urgency of the situation to find ways to disrupt the racist fabric of this society we’re all entangled in,” Gentile wrote.

Heidi Eastman, who co-facilitates a book discussion group for white people on issues of race, also left motivated to do more to “courageously stand up and use my voice for women of color.”

“My own commitment to understanding the structures that keep racial injustice in place was deepened as I heard her personal experience of struggle — and compromise,” Eastman wrote in an email.

Referencing her surroundings, Mallory made note of Antioch College’s “revolutionary spirit” and encouraged the institution to embrace student activism. She praised Antioch for “trying to foster an environment where people can speak up and be seen and heard.”

Mallory went on to call student protest “part of the fabric of this country,” and dissent one of the “cornerstones of our society,” flipping the script on what it means to love one’s country.

“The folks who are really challenging this country are the ones that love it,” Mallory said.

Mallory, who met Coretta Scott King on several occasions, shared her personal reflections on the longtime social justice activist and wife of the late Rev. Martin Luther King Jr., who was assassinated 50 years ago last month.

“As soon you as you saw Coretta Scott King [in a room] you knew there was a queen among you,” Mallory said, noting that she was a “very thoughtful and powerful woman” whose style was nevertheless gentle and soft.

In contrast to today’s harsh social media climate, which Mallory suggested is actually a manifestation of pain and disconnection, King “showed us a different way””

“She showed us that having a soft spirit could actually accomplish the same goal,” Mallory said.

In addition, a longstanding critique of mainstream feminism is that race, and the way it intersects with gender, has been largely ignored, a trend Mallory saw in the early days of Women’s March organizing. Mallory was invited into the group’s leadership after it was initially criticized for its lack of diversity.

“It was like a fire exploded in my soul,” Mallory recalled when asked by a white woman, “What does race have to do with women’s rights issues?”

During the time of “constant fighting” that followed and even after people of color were accused of “being divisive by bringing up race,” Mallory said she thought of King’s defining spirit, and was able to stay at the table.

A turning point for the organization came when Bernice King, King’s daughter, shared a sentiment from her mother that women would have to become the nation’s soul, according to Mallory. Referencing the proposed name, Women’s March on Washington, which many believed was disrespectfully appropriating the famous 1968 civil rights march led by the Rev. King, Bernice King said the name is less important than “how we would channel her father’s energy to do what we do,” Mallory recalled.

“It calmed us all down,” she said.

Locals will have an opportunity to continue to engage in anti-racist conversations and activism through the Coretta Scott King Center, which is planning more activities this fall, according to Cooper. They can look forward to a Freedom to Vote Rally in September and the second annual social justice symposium later in the fall, she added.

Cooper hopes the Coretta Scott King Center comes to be known regionally and nationally, in addition to supporting Antioch students in their activism on campus climate and issues of diversity and inclusion.

“We feel like part of our role is to help students wrestle with issues, think critically about issues and provide them the tools to be engaged,” Cooper said.

“It’s part of who they are — Antiochians are engaged when there is injustice.”