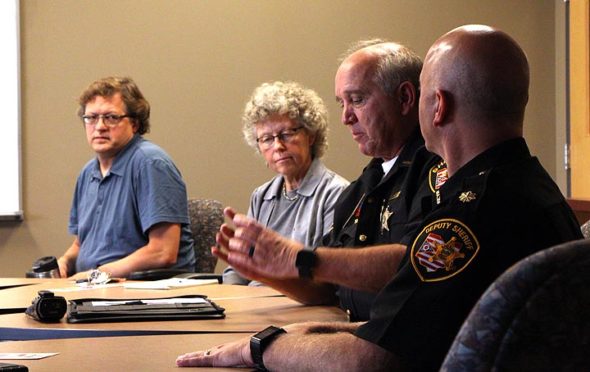 Overcrowding, crumbling infrastructure and infestations of birds and rodents were among the concerns raised by Greene County Sheriff Gene Fischer during a June 27 meeting hosted by the James A. McKee Group in Yellow Springs to discuss plans to build a new Greene County Jail.

The proposed corrections facility would replace the now almost 50-year-old jail located in downtown Xenia, as well as taking pressure off the Detention Center on Greenway Blvd. that opened in 2000.

State jail inspection records show that Greene County Jail was not in compliance with six “important” standards required of Ohio county jails, including cells that were smaller than required and night time noise levels above the acceptable volume.

“When you’re overcrowded, you’ve got problems,” said Corrections Facilities Administrator Maj. Kirk Keller. “We have 146 inmates, while new estimates would say we only have room for 95. We need to have enough space to plan for the future.”

Fischer said that he would like to have room for about 440 beds at the new facility.

Keller also emphasized the hope of the sheriff’s department that the new jail would be built around a philosophy of rehabilitation rather than the old “do the crime, do the time,” model.

“The infrastructure and the philosophy that went into [the old jail] are stuck in the sixties,” said Keller. “If we can create the right kind of facility and programming, we can do more to make sure inmates don’t return to the jail.”

Inmates who have completed the Greene Leaf program return to jail at a much lower rate, according to Fischer.

Other programs, like the ones provided by TCN, a local organization that helps those with mental health or substance abuse issues, are also being used to great effect, according to Fischer. But the limited space at the current facilities has restricted the number of participants.

“My plan would be to build a new jail and turn the Detention Center over to TCN,” Fischer said.

Fischer also stressed the importance of administering mental health evaluations at orientation, a policy that is already being instituted in Greene County jails.

Another goal for the new jail is to create space for a larger on-site medical facility, according to Fischer.

Currently, the medical facility is not able to provide 24-hour coverage, so inmates who need more intensive or long-term treatment must be taken to Miami Valley Hospital where a deputy is then posted to guard them. That can be expensive, according to Fischer.

“We have some great nurses and a great jail physician,” Keller said. “But we still don’t have 24-hour coverage. There are still more tools and resources we could use.”

The planning for the new jail is still in its early stages. The Greene County Board of Commissioners is currently interviewing firms before choosing one to complete a needs assessment for the new jail, and giving its recommendations for the proposed jail’s occupancy, facilities, and design. The process is expected to take until the end of the year, according to County Administrator Brandon Huddleson.

Once the assessment is done, the commissioners will decide whether to move forward with the new facility. If they do, an architect will be hired to draw up the plans.

Finally, when the building plans are done, a contractor would be hired to do the construction. The whole process is expected to take about three-and-a-half years to complete, according to Huddleson.

“If it were up to me, we’d be breaking ground tomorrow,” he said, re-emphasizing that the sooner the new jail is constructed, the better the situation will be for inmates and corrections officers alike.

While the cost of the proposed facility has not yet been determined, a jail being built in nearby Warren County, which is expected to house up to 450 inmates, will reportedly cost about $50 million. The county increased its sales tax by 0.25 percent in January to cover the costs of the operation.

The writer is an Ohio University student and intern at the News.