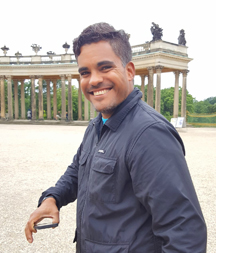 The Sanssouci Palace in Potsdam, Germany, was one of the stops on the itinerary when Yellow Springs Schools Superintendent Mario Basora was sent to a global leadership summit in Berlin, German, by the Buckeye Association of School Administrators. (submitted photo)

The educator became the learner this summer when Yellow Springs Schools Superintendent Mario Basora spent about three weeks in Germany and the Czech Republic, half of that time as a participant in a global leadership summit in Berlin and a related educational tour of the surrounding region.

Basora was one of three Ohio superintendents chosen by the Buckeye Association of School Administrators, or BASA, to attend the leadership summit and participate in some affiliated travel. A BASA scholarship paid for Basora’s experience, a value of about $5,000, he said.

“One of the things that’s really important to us [in Yellow Springs Schools] is we want our kids to graduate high school as global- change leaders,” Basora said recently back in his office.

He noted that the district began offering the opportunity for global travel to its high school students two years ago, first with a trip to Paris and the next year to Peru.

His own trip this summer, Basora said, fixed in his mind the importance of such travel for all students.

His trip started in Munich, where he and the other Ohio superintendents were teamed with a group of administrators from New York state.

Their travel itinerary included the Dachau concentration camp memorial, Nuremberg and the Sanssouci Palace in Potsdam.

Visiting such historical sites first-hand has a deeper, more profound affect than reading about them, he said. And you see that our life in the United States is connected to people in other countries as well.

“What we do affects each other,” he said.

The summit in Berlin, presented by the international Education First organization, brought together about 600 students and educators from around the globe.

“It was really powerful to see hundreds of kids from all over the world,” Basora said.

The focus of the gathering was on the influence of technology on society, and it featured such speakers as Randi Zuckerberg, a businesswoman and former executive of Facebook, founded by her brother, Mark Zuckerberg.

Basora said student workshops used Project-Based Learning and design thinking — a method of creative problem solving techniques — to explore ways technology can be used to benefit humanity and examined the relationship between creativity and innovation.

Basora also had the opportunity to talk to a number of teachers from Germany.
“I was interested in learning more about the educational system [there],” he said.

He assumed that he would hear about a variety of innovative programs, and was surprised when he didn’t.

“In the end I learned that they’re for the most part very traditional, especially in Berlin.”

German education looks a lot like education here, he said.

One difference, however, and “probably the No. 1 take-away for me from the experience” was the importance of language education, he said.

“Everybody I met spoke English,” he said. And many spoke a third or even fourth language as well.

Basora finds that early focus significant, and he feels the lack of such training here — and across the U.S. — puts our students at a disadvantage, particularly if they are to be “global change leaders,” as the Yellow Springs district hopes.

“We need to have a conversation” about implementing foreign language education in the local elementary and middle school, Basora said.

School districts pay less attention to language education because it’s not funded nor tested, Basora said, but he doesn’t want those conditions to dictate what the local district does if educators and the community feel it’s important.

He’s ready to get that conversation started, he said.

All in all, Basora said he returned to Yellow Springs more appreciative of what the local schools and village offer.

“So many of my colleagues I was with didn’t have some of the amenities we have.”

In an email, School Board President Aïda Merhemic wrote that the trip was not only an honor for Basora, but also “brings state and international recognition to the district.”

She added that she looks forward to hearing more about what the superintendent learned and his ideas for the local schools.

“Traveling can be a personally and professionally transformative experience,” Merhemic wrote. “I imagine Mario was introduced to many new and different cultural experiences and furthermore challenged by new perspectives and ideas. I can’t imagine that those won’t somehow be integrated into the district and expand his leadership skills.”

In terms of personal effect, Basora said he was impressed by the priority he saw in the German culture on environmental and climate concerns, and he appreciated an emphasis on a healthy life approach that incorporates more walking and biking.

He’s come home determined to ride his own bike regularly to work and to be more physically active.

“I’m excited about what’s going on here,” he concluded. “I’m coming back with some really good energy, and I feel really good about the work we’re doing.”