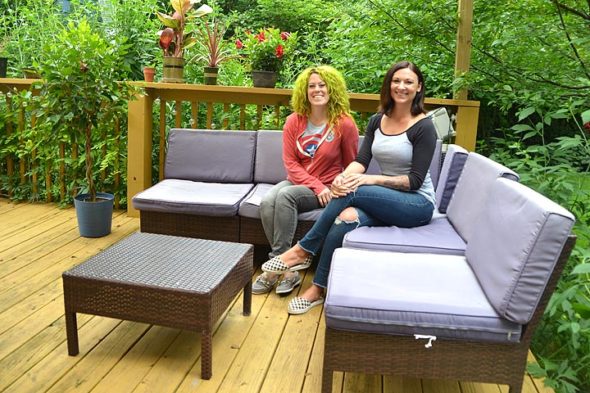 Brittany Baum, left, and Rachel Price, shown here on Baum’s backyard deck, are co-organizers of the first Yellow Springs Porchfest, to take place Saturday, Oct. 6, from noon to 7 p.m. At the event, local musicians will play for free on villagers’ porches, decks and yards. (Photo by Diane Chiddister)

Villagers coming together to hear local musicians. Neighbors greeting those they know and welcoming those they haven’t met before. People enjoying a beautiful autumn day outdoors, walking the neighborhoods of the village.

All of these attractions and more are envisioned by the organizers of the first Porchfest to take place in Yellow Springs. Slated for Saturday, Oct. 6, from noon to 7 p.m., Porchfest will feature local musicians playing from villagers’ porches, decks and yards to anyone who wants to listen —  for free.

“As soon as you start walking away from one house, you’ll hear music coming from another,” said co-organizer Rachel Price in a recent interview. “It’s people getting out and spending time together, while supporting local musicians.”

Since it was launched in Ithica, N.Y. in 2007, Porchfest has spread across the country as towns embrace the concept of musicians giving free concerts in the informal venues of front porches, patios and lawns. Initially taking place in one community, Porchfest now makes an annual appearance in at least 117 cities and towns nationwide (according to porchfest.com), from Napa, Calif., to Buffalo, N.Y., and from Carmel, Ind., to Jacksonville, Fla. While 20 musicians took part in the first event,  hundreds and perhaps thousands perform now.

Local co-organizer Brittany Baum, who is working with Price, first heard about Porchfest during a meeting of the Village Arts and Culture Commission, of which she’s a member. When fellow commission member Kathy Moulton described a Porchfest that takes place in Dayton each year, Baum was intrigued.

“I thought, ‘What an awesome idea. Yellow Springs has so many musicians,’” Baum said. When she shared the idea with her good friend, Rachel Price, Price said, “Let’s do it.”

With the blessing of the arts commission, the two women began organizing. And as soon as they began talking to others, they found an enthusiastic response.

“It’s taken on a life of its own in a short time,” Baum said.

After running a small news item in the Yellow Springs News and on Facebook, Baum and Price have already signed up about 12 villagers to host, and 17 musicians to perform. But they’re looking for more, both porches and players, and those interested in participating can go online to ysporchfest.com, with a deadline of Sept. 1.

The organizers are seeking musical hosts with front porches, decks, patios or simply front yards in about a half-mile-square radius around the historic center of the village, from Corry Street west to High Street and from Fairfield Pike south to Center or North College. The purpose in containing the area of the event is to keep the event walkable, the organizers said.

Those who offer their homes only need to provide an outside venue, along with a power source, according to Price. There’s no requirement to provide refreshments or allow people to go inside — rather, it’s up to homeowners to decide what they want to do. And music at each site will take place only during a small portion of the seven-hour event, so that all villagers have the chance to visit other porches as well. Baum and Price will take care of all necessary planning and coordinating of the events, they said.

Baum and Price are also seeking business sponsors for Porchfest. Contributions will be used for advertising and printing maps for the event, with the bulk going to pay the musicians, they said.

Both Baum and Price are relatively new to the village, with Baum having lived in Yellow Springs for three years and Price for one. The two were already good friends, since Baum’s husband, Tim, was a childhood friend of Price in Zanesville, Ohio. The families had lived in Columbus at the same time before Price, a software designer, and her husband moved to Seattle, coming back occasionally to visit the Baums, who had moved to Yellow Springs. After a few years Price and her husband decided to move to Yellow Springs, too.

“I made more friends in one day here than I had in three years in Seattle,” Price said.

Baum, too, has no regrets about having moved to Yellow Springs. For her work — she and her husband own gourmet pretzel shops in Columbus and Cincinnati — she travels a lot, and she especially enjoys returning to her home, backyard, dogs and chickens in Yellow Springs.

“I feel like Yellow Springs is my sanctuary,” she said.

Both women are especially hopeful that Porchfest will provide villagers with the warmth that both music and community offer, especially when the national news seems full of chaos and strife.

“Bringing the community together is a good thing,” Baum said. “Especially when there’s so much going on outside this community, coming together seems what everyone needs.”