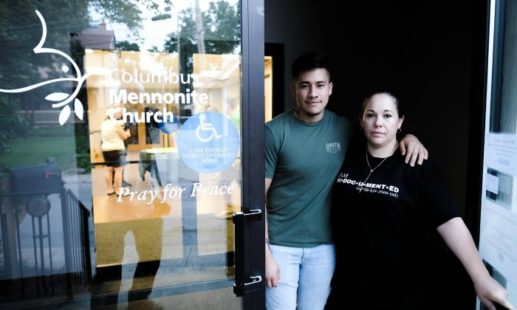 Edith Espinal and her son, Brandow Gonzalez, at the Columbus Mennonite Church. Espinal sought sanctuary there under threat of deportation in September of 2017. (Photo from themennonite.org)

Pastor Joel Miller to discuss sanctuary in the village

Guest speaker Joel Miller, pastor at the Columbus Mennonite Church, will speak at Rockford Chapel. on Saturday, Oct. 20, beginning at 7 p.m. The Columbus Mennonite Church has made a home for Edith Espinal, an undocumented mother who fled violence and sought refuge in the U.S. more than a decade ago and is working, with the church, to stay united with her family in Columbus.

Espinal entered sanctuary at the Mennonite Church in September of 2017, making her the first to be publicly granted sanctuary in Ohio. She entered the United States under “advanced parole,” which would allow her to legally stay in the country while she sought asylum. When asylum was denied, Espinal was ordered to report to ICE for deportation on Sept. 5, 2017 — instead, she took up residence at the church on Sept. 4, where she has lived since then.

The intent of this event is to spread knowledge on becoming a sanctuary community and to introduce a conversation for a sanctuary network in Yellow Springs. Donations will be accepted for the needs of the Espinal family. All are welcome and encouraged to attend.

A full story on the event will appear in this week’s issue of the News.

For more on Espinal’s story, read pieces from The Mennonite and The Columbus Dispatch.