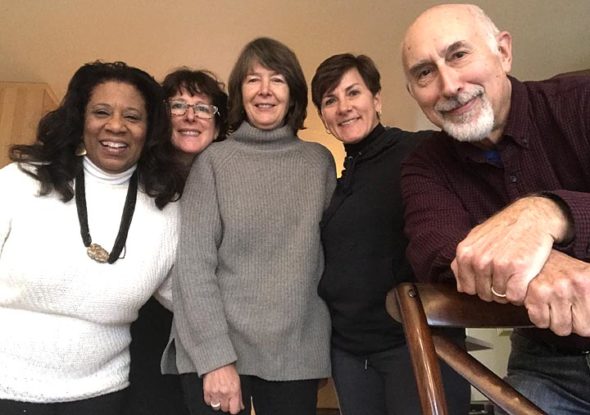 When Nolan and Dick Miller bequeathed $3.6 million to the Yellow Springs Community Foundation, they wanted the funds to go to Antioch College students who would serve the local community. But they did not specify what shape it would take.

A decade later, their gift drives what is widely considered a successful program — the Miller Fellowships — in which Antioch College students are paid to work at local nonprofits. While the students earn money and work experience, the nonprofits can do more without a hit to their budgets. And the college and village are brought closer.

Now, the Millers’ intentions are being revisited in a planned expansion of the program. This latest evolution is the Encore Miller Fellowship, which unleashes the talents of retired or “late-career” villagers in support of both the Miller Fellows and the local nonprofit sector.

“The Encore program will give us a lot more depth,” explained Jeannamarie Cox, executive director of the Community Foundation, in a recent interview.

“We are really trying to use the funds to focus on what the Miller brothers would believe in,” Cox added.

The brothers mentioned supporting seniors and local nonprofits in setting up the endowment, which has since grown to $5 million in assets, and they would be pleased with its new direction, Cox believes.

Nolan, who died in 2006, was an associate editor of The Antioch Review and a longtime literature professor at Antioch College. Richard, who was deaf from the age of 15 months, was an accomplished artist who died in 2009. They lived together in the community for 55 years.

Four Encore Miller Fellows have been selected in the program’s pilot year, each serving in one of Antioch’s “communities of practice:”

Encore Fellows will not only mentor Antioch students, guiding them through the nonprofit sector and upping their skills, they also will create links between and among Miller Fellows, the nonprofits they serve, the college and the village, Cox explained.

At the heart of the new program is a belief in the power of collaboration.

“There is a common need across local nonprofits — resources — and a common interest — to collaborate,” Cox said.

But organizations often don’t have the time, money or capacity to stake out such collaborations. That’s where the Encore Miller Fellows come in.

Kramer, who spent much of his career in organizational development, resonates with the vision of collaboration.

On a “listening tour” of Miller Fellow employers, Walter said she learned that there is much overlap between local organizations but that the groups aren’t eager to add more to their plate.

“They want to know, ‘are we going to be putting more work on their shoulders?’ But we are here to alleviate that and strengthen them,” said Walter, who is a teacher, writer and community organizer.

Roe, a professional in the field of conflict resolution, sees her role as a facilitator of local collaboration among nonprofits, which she believes “stabilize a community.”

“[Nonprofits] bring out the best in people,” Roe said. “We can empower that and make that robust. Success always comes on the other side of service.”

According to Cox, in the Miller Fellows program’s seven years, 185 Antioch students have worked in over 200 positions at local nonprofits (including within Antioch itself), with more than $750,000 going to the organizations through their payroll. This year, 34 Antioch students are working for 24 local organizations.

Students have said that their Miller Fellowships have helped launch their careers, according to past News articles, while employers have reported that the positions are invaluable to their work, Cox said.

To Antioch College President Tom Manley, the Miller Fellowships have already helped the college and village “achieve an organic relationship,” something they had sometimes struggled to do.

“It’s helping understaffed organizations get some lift … and our students are doing things way beyond — they are change-makers in those organizations,” Manley said of the benefits.

Now, Manley is excited that the Encore Miller Fellows will boost the program, relying on their extensive knowledge and skills to weave a “social capital web” across the village in the college’s communities of practice.

“It really is setting a new bar for the way that colleges and communities co-habituate,” Manley said of the overall vision.

Since the Encore Miller Fellows have only just begun their work, they have no definite plans for the next six months. But if they are successful, then next school year there may be more of them.

In reflecting on their areas of practice, the Encore Fellows this week acknowledged their interconnections.

For Heston, a fitness professional, well-being isn’t just about personal self-care but quality of living for the community as a whole, as well as equitable access to food and housing. Walter sees how the natural world cannot be separated from anything else. Roe refers to social justice and deliberative democracy as an “umbrella over everything,” while Kramer defines resilience as “the ability of a community to be diverse enough to bounce back from adversity and take advantage of opportunities.”

Across all the areas, we need to share our stories, said Scott Geisel, a writer and English teacher who is working with the foundation to tell the program’s story.

“This story,” he added of the Miller Fellowship program, “is an inspiring legacy by two unusual brothers.”

For more information or to volunteer, contact Kramer at len2654@gmail.com.