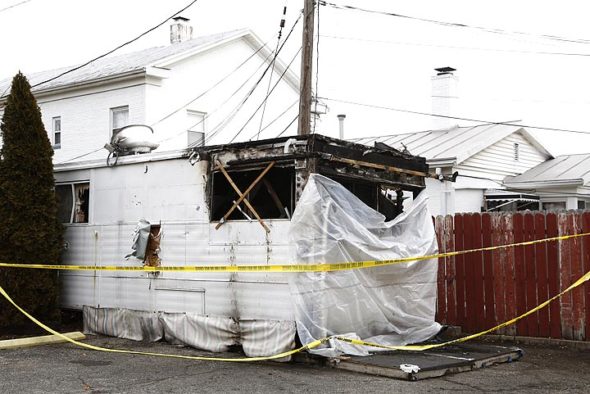 A fire over the weekend at the Aahar India food trailer left the trailer — parked in the Corner Cone lot — badly damaged. Owner Akhilesh Nigam is now seeking community support to rebuild and reopen the Indian take-out restaurant. (photo by Gary McBride)

Aahar India, the local Indian food truck at 101 S. Walnut St. next to the Corner Cone, burned Saturday evening, Jan. 5. Flames from the grease fire — started while frying pakora for a customer — at one point engulfed the front section of the trailer.

Miami Township firefighters quelled the blaze within a few minutes of arriving and no one was injured. Although the trailer sustained unknown damages, a firefighter on the scene deemed it “most likely a total loss.”

But Akhilesh Nigam, who has owned and operated the take-out restaurant for the last nine years, is already thinking of the future.

“Whether I have to rebuild this one or get a new one, we’ll see,” he said on Monday. “When I do it, I’ll make it better than it was before.”

“I want to run it again, because that’s my passion,” he added.

Nigam, who had yet to assess the damages, remains optimistic.

“For me, it’s still alive,” Nigam said of the restaurant. “It’s like when someone close to you dies. They are still there.”

Nigam is now looking to the community to help him get Aahar India back up and running as his insurance had lapsed at year’s end. Nigam plans to set up a GoFundMe page to raise the money to repair the trailer or buy a new one. He estimated the cost of a new trailer at $20,000 to $25,000. Donors will likely receive coupons for Indian food, redeemable when the restaurant reopens, Nigam said. He hopes to open again in two months.

According to Miami Township Fire Chief Colin Altman, the fire started when hot oil in a pot on top of the stove spilled over onto the gas burner. Nigam explained that the exhaust fan then pulled the flames up through the roof. Nigam said he had filled the pot with too much oil.

Altman said that the trailer had passed MTFR inspections, the last of which was done a couple of years ago. Due to the age of the trailer, it lacked a fire suppression system, he explained.

“One of the downsides to these mobile food trailers — that a new food truck would have or an actual restaurant would have — is a hood system that will put the fire right out,” Altman said.

Nigam said business has been steady at the restaurant in recent years, with many faithful customers for his fresh, made-from-scratch Indian dishes. Rainbow birani, chicken tikka masala, kachori and lamb dishes were favorites, Nigam said.

On Sunday at his usual opening time of 2 p.m., regular customers planning to order food trickled by, shocked to see the burned out trailer. But it was heartening to Nigam and a sign he should rebuild.
The new and improved Aahar India won’t be too much different, Nigam added. He said he has no interest in growth, and would not go back to running a brick-and-mortar restaurant.

“I could have grown but I wanted to keep it under my control,” he said. “It was already more than I can handle.”

In the end, Nigam is grateful he was not hurt, and sees a silver lining in the ashes.

“I’m fine. I’m happy. If I believe in one thing, it’s that whatever I have is a God-given gift,” he said.
“Whatever has happened, has happened. It will open up a better path. I always see opportunity. I always see good things.”

*Matt Minde contributed to this story.