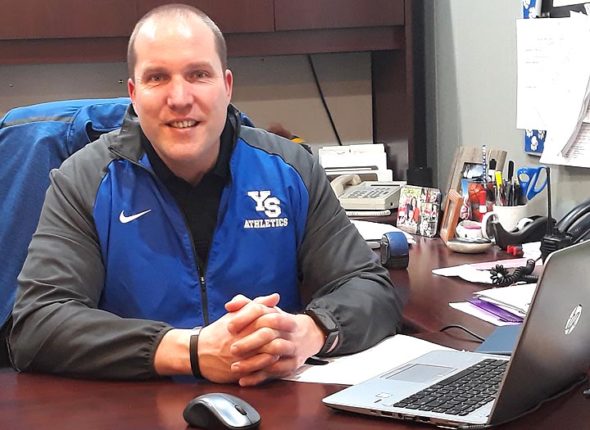 In recommending Hatert to the board, Superintendent Mario Basora said that throughout a rigorous interview process involving faculty, staff, students and community members, Hatert “came out as the top candidate” with “near universal support.”

Hatert, 36, has been serving as interim principal at the school since March of last year, when then-Principal Tim Krier went on leave in connection with allegations of sexual misconduct against a family member enrolled at the high school. Hatert will continue as interim through the end of the administrative contract year, June 30, and begin his tenure as principal Aug. 1.

“I’m really excited to get to continue to work with the students, staff and community,” Hatert said earlier in the week, after the district announced he had been selected from an original pool of 22 applicants.

Assistant principal for three years before stepping in as interim, Hatert has spent his 13-year educational career in Yellow Springs Schools.

His new contract includes a starting annual salary of $99,750. As an administrator, he also receives a full retirement “pickup,” where the district pays the employee’s portion — 14 percent — into the State Teachers Retirement Fund, or STRS, according to Basora. Other benefits are the same as all employees, Basora said.

According to District Treasurer Dawn Bennett, benefits include health, dental and vision insurance, of which 85 percent is paid by the district, and a $60,000 life insurance policy that is covered 100 percent. Employees also get three personal days and 15 sick days per year, accrued at 1.25 per month. There are no paid vacation days for certified staff, but principals’ contracts extend August through June, and do not include July.

“You can have a lot of confidence in [the person who] rises to the top in a process like that,” board President Steve Conn said, adding that he had also “received a number of unsolicited emails from parents and community members expressing enthusiasm and excitement” for Hatert.

Board member Sylvia Ellison said she too had received unsolicited endorsements in favor of Hatert.

Board Vice-president Aida Merhemic expressed gratitude to community members for engaging in the interview process.

Basora told the board that the district will now begin a search for a new assistant principal, Hatert’s previous position. Cameron McCoy has been serving as interim assistant this school year.