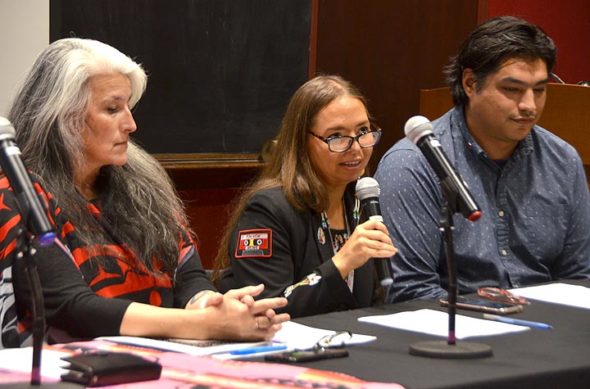 Jennifer Knickerbocker, center, Antioch College’s director of foundation and corporate relations, spoke on a panel of indigenous leaders on water protection during Antioch’s Earth Week, which this year centered on the theme of water. Knickerbocker is Anishinaabe of the White Earth Nation. Flanking Knickerbocker is Dayton organizer Corine Fairbanks, left, an Oglala Lakota, and Shane Creepingbear, right, of the Kiowa tribe of Oklahoma and Antioch’s associate director of admissions and multicultural enrollment coordinator. (Photo by Megan Bachman)

“We are on stolen land and we need to recognize that,” Jennifer Knickerbocker said to solemn applause at the start of a panel discussion last week during Antioch College’s Earth Week.

Knickerbocker, Antioch’s director of foundation and corporate relations, was referring to the settler colonialism that displaced the area’s original indigenous inhabitants as part of the continent-wide U.S. policy of genocide of native peoples.

“Yellow Springs is literally a colony,” added Knickerbocker, who is Anishinaabe of the White Earth Nation, in a later interview. “It built systems of colonization that weren’t in harmony with nature.”

At the panel, indigenous leaders from the Oglala Lakota, Hunkpapa Lakota Sioux, Dakota Wakpala, Northern Cheyenne, Kiowa and Anishinaabe spoke about water protection and other environmental and human rights issues.

The discussion was part of an Antioch effort involving “re-indigenizing the land,” Knickerbocker added at the panel. That process means honoring the land’s ancestors and decolonializing.

“It’s throwing off the shackles of colonization that make us put our plants in rows and clocks on our walls,” she later said of the term.

“We’ve all been colonized.” she added.

That effort includes bringing more native students to campus to attend Antioch, weaving studies of colonization into the college’s curriculum and engaging in ceremonies and activities that acknowledge the original inhabitants and move toward healing.

As a marginalized population, indigenous people suffer from environmental pollution and resource scarcity at greater rates and are being impacted by climate change ahead of many other communities, indigenous leaders said at the panel. They are also among those leading the charge for environment justice. However, several panelists bristled at labels of water protector or activist, a term Knickerbocker later said has been used against indigenous people.

Dayton-based organizer Guy Jones, who is Hunkpapa Lakota Sioux, criticized the desire to call oneself a water protector, saying instead that he acts based on his responsibility as a “relative.”

“I’m not an activist or a water protector,” he said. “When I came into this world I had a responsibility.” 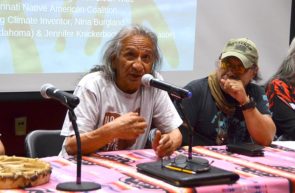 Duwayne Redwater, also of the Hunkpapa Lakota Sioux, added, “it’s our jobs as indigenous peoples to be the … caretakers of the land.” He likened present-day indigenous efforts to protect the land to the time when indigenous people taught 17th century white colonists to grow corn.

“We’re still willing to show you guys the way. It’s kind of our jobs,” Redwater said.

Errol Medicine, a Dakota from Wakpala, S.D., who participated in the 2016 protests of the Dakota Access pipeline at the Standing Rock Sioux reservation, also eschews the label of water protector.

“Water is our first medicine,” he said. “We all come from water and we need water to survive.” 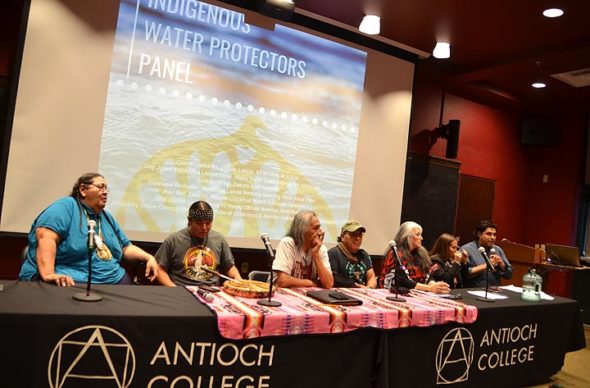 Nina Berglund, a 19-year-old from Minnesota with Northern Cheyenne and Oglala Lakota heritage who particpated via Skype, said that before the term water protector was applied to them, native people struggled daily to protect their water and land, in addition to their culture and language.

“It’s a struggle for survival,” she said. “Call us water protectors or whatever you will. We are just carrying on the world of our ancestors and that’s what every one of us should be doing.”

Berglund, who is also a Young Climate Intervenor, asks herself the question, on a daily basis, “What am I going to do today that will benefit my great-great-grandchildren?” a question that she believes her ancestors also must have asked.

Our ancestors never gave up,” she said.

For Shane Creepingbear, Antioch’s assistant director of admission and multicultural enrollment coordinator, the “centuries-long genocidal program of settler colonialism,” which has been omitted from U.S. history books, needs to be recognized in order to address current environmental crises.

“Today, as the world shrivels under climate change, native communities are gathering to protect the land that had been destroyed and taken,” said Creepingbear, who is also a member of the Kiowa tribe of Oklahoma and served as the panel’s moderator.

Creepingbear offered some statistics that bear out the genocide: a decline in North American native populations from an estimated 15 million before colonization to three million today.

“We are here, in part, to recognize the founding myth of the United States and to show how it was colonialist and designed to reduce the territory of the original inhabitants, eliminating them,” he said at the panel’s start.

Corine Fairbanks, a Dayton-based organizer in the American Indian Movement and a Oglala Lakota, echoed Creepingbear’s notion that remembering how indigenous lands were stolen and colonized is crucial to understanding the present forces that threaten the environment. 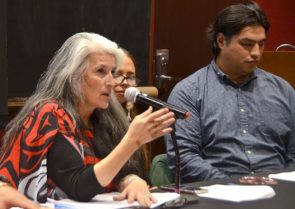 “There has always been a war on black and brown people as well as poor people,” which, Fairbanks said, has “stayed true to form since 1492 and is still a driving force today.”

By contrast, native peoples cared for the land on which they lived, Fairbanks said, citing, for instance, the tribes that once lived along, and protected, the California coast. Creepingbear said an estimated 500 tribes once inhabited what is now ­California.

Water is a human rights issue, as well as a spiritual one, Fairbanks believes. Water, she said, connects all beings.

“It’s not just the water itself, but how we’re all ecologically, physically and spiritually connected to each other.”

In response to a question on environmental racism, Jheri Neri, director of the Greater Cincinnati Native American Coalition, cited the lead-tainted water of Flint, Mich., and the legacy of uranium mining in native communities in the western U.S.

“People say what can we do to help you? You can’t do anything that hasn’t already happened to us. We are here to warn you of what’s going to happen to you.”

Reflecting later on the panel, Knickerbocker said it was important that a wide variety of indigenous tribes and perspectives were represented.

“People monoculturize us,” Knickerbocker said. “When we say we are all related, it means we are in harmony with where we stand.”

Another misperception is that Native American culture is static, she said.

“We are sometimes talked about like we only exist in the past,” Knickerbocker said. “We are alive. We have evolved. We are not just one thing.”

Re-indigenizing Antioch
In a later interview, Creepingbear and Knickerbocker discussed the panel’s role in the ongoing work to “re-indigenize Antioch.”

Knickerbocker came to Antioch about a year-and-a-half ago from Spokane, Wash., for that opportunity. Creepingbear, meanwhile, has been working toward that goal through his work in admissions and diversity at the college since its reopening in 2011. Both also reside in the village.
Among those efforts are plans to bring more native students to campus to attend Antioch, which starts with creating a campus that is “ready to welcome them,” Creepingbear said.

Ceremonies that acknowledge and heal the trauma enacted on the land and its native inhabitants is another focus. Some of the indigenous visitors to campus for the panel, for example, participated in prayers, songs, ceremonies, visits to natural landmarks and sweat lodges in and around campus during Earth Week.

Creepingbear said that acknowledgement of the past is vital to moving forward.

“There is something to be said for naming the people that once existed here and what happened to them,” he said.

Colonization is also being emphasized in the Antioch curriculum. That education should include the entire campus, Knickerbocker believes. As Antioch embraces its new motto of “own your education,” that means that all staff and faculty keep learning — and unlearning, she said.

While the tendency in a colonized society is to “not be in real relationship and not really listen,” Antioch has the opportunity to become a community, Knickerbocker said.

“I want to look in someone else’s eyes and be recognized. That’s what we all want and that’s when we know we have community.”

The path to get there is sometimes unclear, Creepingbear noted, saying “there’s no decolonization roadmap like there is with colonizing.” But recent efforts, including the Earth Week panel, have started the process, Knickerbocker said.

“The doors are wide open now.”

The panel can be viewed in its entirety at Antioch College’s YouTube Channel.