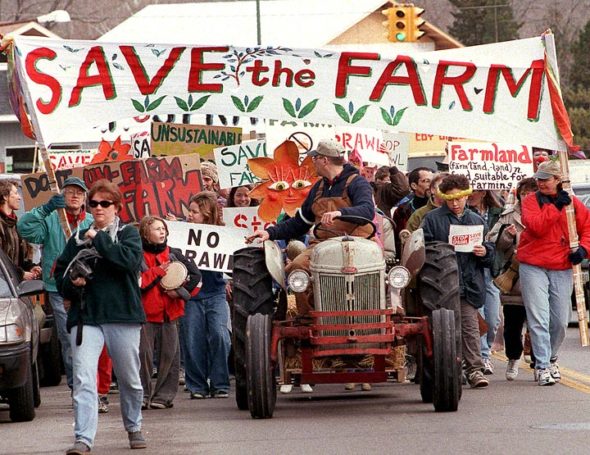 “Yellow Springs is not a mall,

We will fight suburban sprawl!”

“Developers, developers don’t even try it

Two decades ago, such chants rang out as villagers rallied to save from development a 940-acre farm north of town.

Whitehall Farm was permanently preserved. A local land trust was put on the map. And a community victory still inspires.

“Twenty years later, say Whitehall to anyone who was around then, and they just smile,” reflected Evelyn LaMers last week.

“It was quite celebratory,” recalls Krista Magaw, now director of the Tecumseh Land Trust, whose efforts helped save the farm. “People like the idea that someone can take control of their own fate.”

The story is now legendary. A vast area of farmland roughly the size of Yellow Springs was set to be auctioned off to the highest bidder in February 1999. Concerns that it might become tract housing swirled.

“The worry was that Yellow Springs would become like every other suburb in the world,” Magaw said. “People were sure they would be engulfed by development.”

So villagers came together, raised $1.2 million from private donors and local governments in six weeks and used those funds to purchase a conservation easement on the property, which Dave and Sharen Neuhardt were then able to buy in its entirety at auction for $3.275 million.

The mood in town over the next few weeks was elation. A march went down Xenia Avenue, with banners reading “We Saved the Farm.”

TLT, meanwhile, has gone on to preserve 27,000 acres of farmland and natural land in two counties, from humble beginnings in which it preserved under 500 acres from its founding in 1990 until Whitehall.

“It’s also how a lot of people got involved in the land trust,” Magaw said.

Added former TLT board member Bob Huston, “we raised consciousness about farmland preservation, which is now in everyone’s DNA.”

TLT will celebrate the 20th anniversary of Whitehall’s preservation at its annual meeting on Sunday, June 2, at 2 p.m., at  Whitehall, 4633 U.S. 68. A tour of the property’s historic agricultural buildings will begin at 3 p.m.

In addition, Kirk Hines, chief of the Ohio Department of Agriculture’s Division of Soil and Water Conservation will speak at the meeting on the “magnitude of farmland preservation” since Whitehall, and the challenges to conservation ahead.

Also to be celebrated is the second anniversary of another auction victory, that of the Arnovitz farm west of the village in 2017. Local nonprofit Community Solutions bought half of the property — 128 acres — and is working with TLT and other partners to preserve and restore it. Agraria, as it is now known, is a place where soil and water conservation practices and innovative farming methods are modeled, in partnership with TLT.

Although both auctions ended in preserved farmland, their successful outcomes were anything but assured. In fact, much of the work of TLT goes into preventing a property from going up for auction.

In fact, a small group of villagers had been communicating with the owners of Whitehall for decades. As its last owner, Martha Rankin, got older, efforts to keep the farm from being auctioned intensified. A Farmland Preservation Task Force was formed by TLT more than two years ahead of time, and was a key to the farm’s fate, according to Julia Cady, a task force member and TLT’s board president.

“We had much lead time to work on the protection,” Cady said.

Along with luck and “many angels” who donated money for the conservation easement, the result was positive, Cady reflected.

“Everyone was working together to get this accomplished,” she said. “Even if we hadn’t been successful, I think we would have said that we did everything we could.”

“[Task force co-chair] Al Denman said we need an angel. We had a lot of angels,” Cady added.

LaMers, then a TLT board member, also saw how the community rallied when faced with the possible loss of greenspace so close to town.

She remembers how yard signs popped up daily, a “cornometer” made by Huston and erected on the wall of Deaton’s Hardware showed the community’s fundraising progress and eight-foot tall “NO SPRAWL” letters made by Jim Mayer lined the highway. Everyone gave how they could, from a villager who organized a 13-hour Kelly Hall concert that raised $7,000, to an elementary school student who raised $7 by putting out a jar at lunch to “Save the Cows.”

Donations came in from across the country, as newspaper headlines announced, “Yellow Springs shudders at development” and “Village fights for farmland, its values.”

“The best impact 20 years since is that we have 1,000 acres of farmland and it was all paid for by local people, voluntarily, and with much enthusiasm,” LaMers recalls.

Huston called it a “groundswell of people” that helped save Whitehall.

Today, the story of saving Whitehall is actually taught in some college courses as a case study for preservation, Magaw said.

But the story begins much earlier, with another effort to preserve farmland in the late 1980s, according to Huston. When the Village was set to sell the municipal property known as the Sutton Farm to a company for its national headquarters, villagers banded together.

“That was the start of raising the awareness of land preservation for agricultural use,” Huston said.

TLT was then formed in 1990, and by the time the Whitehall auction was announced, at the end of 1998, the group was set to educate the community about preserving property through conservation easements.

Earlier efforts in the village to establish a greenbelt, such as the “country commons” plan dating back to the early 1960s, relied on local landowners holding each other accountable instead of legally enforceable easements, according to Magaw.

After Whitehall, TLT went on to focus more on preserving farmland using funds from newly enacted state conservation programs. It also expanded geographically, from a focus on Miami Township and the village to all of Clark and Greene counties. Cady explained the shift.

“Our success with Whitehall gave the land trust credibility with farmers and across the Dayton area,” she said.

Yellow Springs would be a far different place today if Whitehall had gone to developers, several of those interviewed this week said.

“People felt that it would change Yellow Springs and this area forever,” Huston said. “It could have been ‘Yellow Springs North.’”

“The northern gateway would have been completely different,” added Magaw.

Now, after another fortunate outcome at Agraria in 2017, the land trust is looking to the next 20 years of conservation. Despite the proliferation of farmers markets and organic farming, conservation is still an “uphill battle,” Huston noted. But, like the Whitehall story, it is filled with possibility.

“The next step is Agraria and the idea of farming the land in a regenerative way.”