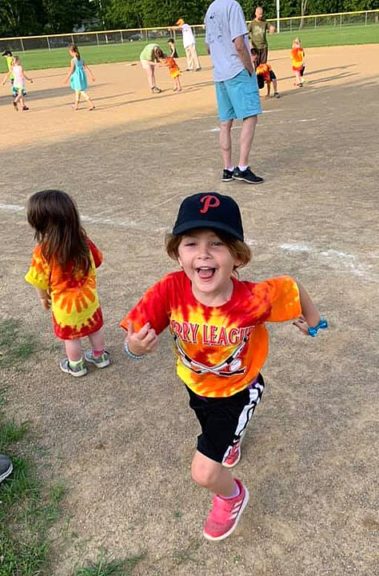 Erin Fink, 8, came up to the plate with a smartphone. Her mother, Pam, came with her, carrying Erin’s little sister Sarah, 2. Pam held Sarah by the wrists, hoisting her up, trying to get her to stand at the plate. As Erin aimed her phone’s camera, Pam hoisted Sarah over and over again while Sarah was playing a 2-year-old’s version of flying trapeze. Every time Pam hoisted her, Sarah lifted her knees, pumping them up, pulling her feet up and away from the ground. Though quite challenging and frustrating for Pam, Sarah’s refusal to cooperate, her continual lifting of her knees and legs, struck Erin and me as a bit hilarious. Mother Pam prevailed finally — I don’t know how — getting Sarah’s feet on the ground, at least long enough for this toddler to hit the ball off the tee and head, Pam hoisting once again, for first base.

David Scott came to the plate with his oldest son, David Jr., 8. David’s a handsome boy who was very comfortable with his bat. He hit a strong grounder with a mighty, well-handled swing.

“This is Mason, who is 6,” his father David said as a second handsome boy materialized at the plate. Mason was athletic and physically comfortable and at ease inside himself.

But then came Aiden, just 3, a smaller, but just as attractive and interesting boy as his two older brothers.

“Three sons!” I said to David.

And then, in no time, Aiden hit the ball and took off for first, his attentive, caring, handsome father close at his heels.

Parker Bistline, 3, came next. His dad, Mike, was in the on-deck circle with his twin sister, Ella.

Parker wielded his bat like a Viking wielded his club and this quiet, unassuming, holy warrior knocked the ball right through the legs of the children lined up across the diamond.

Ella, too, also 3, seemingly humble and non-threatening, hit the ball quickly, effectively, straight at the kids clustered at the pitcher’s mound.

Fiona Garcia, 5, came to bat without her Perry League cap.

“She doesn’t want to wear it,” Laura Byrnes said. “It musses her hair too much.”

“I feel the same way,” I said, and noticed, as if for the first time, Fiona’s fabulous head of hair — it was long and thick, cascading to, and then, over her shoulders.

A vibrant gang of children fielded a couple hundred balls — Foster Woehrle, 4, was a serious and studious adventurer, bringing 20 balls he’d caught; Amandine Bouquet Sabre, 5, was glorious, bringing a ball or two or three after every kid hit the ball off the tee, her eyes wide, shining with excitement, pride, and pure unadulterated joy; Zander Breza, 6, after helping his dad, Mark, throw balls to kids from the first-base line, came into the field and chased and scooped up 30 balls of his own; Brody Bistline, 6, smooth and polished as an infielder, gathered two dozen balls; Rowan Arthur, 6, his red hair like his mom, Jenn Weate’s, whose hair, she said, came from her grandparents, the red genes apparently recessive, skipping a generation — he, Rowan, with a beautiful brand new bright green genuine leather glove, scooped up an even 28 balls.

Reese Tobias, 4, was a persistent hitter, who ran the bases like a child on a mission. Her sister, Avery, 9, was on the field in full force, a power to behold. These 9-year-olds are so experienced, they could be coaching already. Avery’s one of those, a natural coach-to-be — or at least someone who was quite comfortable being in charge.

Deucy Hall, 3, in his first year as a T-ball player, “did pretty good” according to Julia McCowan. Mariah Kayla Hall walked with Deucy — he ran some, walked some, and was quite intent, thoughtful and interested in everything that was happening on the diamond.

The Gama-Lobo family was back in town, up for a few weeks from their home in South Africa. Marina, 8, clearly talented and physically sophisticated, did an interesting variation on our “get-down-on-your-hands-and-knees and crawl-around-two-other-human-beings” warm-up exercise — which variation I think we should add to our warm-up routine. What Marina did was, once on her knees, instead of crawling around two other kids, she lifted her right arm up and out while simultaneously lifting her left leg up and away. She did this, alternating lifting her right-arm-left-leg with lifting her left-arm-right-leg, and it looked like she was swimming in the air. It was a beautiful ballet move that her little sister Mayaan, 4, liked and copied, doing it right next to her. Thanks, Marina. Thanks, Mayaan.

And that’s our Perry League, Yellow Springs’ T-ball program for all kids 2–9 years of age, regardless of their race, color, creed, sexual orientation, ethnicity, spiritual inclination or practice, ability or disability — or their propensity to make up their own exercises and swim in the air. Please join us and play some ball with us. You can begin at any time, and there is no requirement to play every week. We’ll be out there at Gaunt Park from 6:30 to 8 p.m. for the next seven Friday nights, and we’d love to have you.