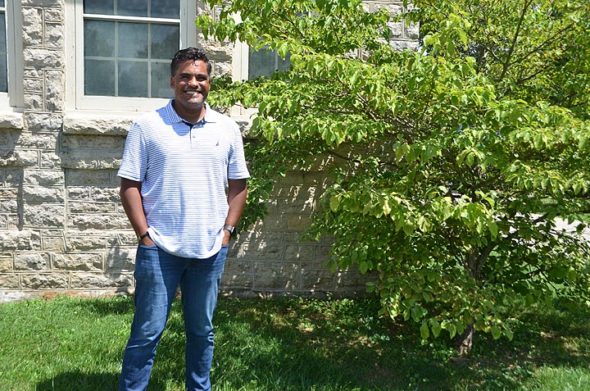 Outgoing schools Superintendent Mario Basora bids farewell to Yellow Springs Schools after nine years in the top administrative position. On his final day in the office, he came outside for a picture beside a tree that has grown from a sapling since his first week on the job. (Photo by Carol Simmons)

Basora reflects on his tenure

For his final day in the office as Yellow Springs Schools superintendent, Mario Basora had hoped to walk over from his home on Allen Street.

Walking or biking to work will no longer be an option as Basora takes on the full-time responsibilities as the new superintendent of schools in Huber Heights, about a 20-minute car ride away.

His official start date with Huber is Aug. 1, but he has been easing into the position all month. His last day on site in Yellow Springs was Wednesday, July 17, as he ends the month here taking accumulated vacation time.

A rainy morning, however, precluded that final walk to the local district offices on Walnut Street, where he has spent the last nine years as the administrative leader of the community’s public schools.

As one of his final acts, he sat down with this Yellow Springs News reporter to look back at his tenure and to talk about the challenges he sees facing the district as well as the strengths that make the local schools and community unique.

With the last boxes packed and ready to take away and his large white board  wiped clean of its former to-do project list, Basora admitted to having some mixed feelings about the job transition.

While he’s looking forward to the chance to influence the direction of a larger district — Huber Heights has more than 6,000 students compared to Yellow Springs’ current 720 — Basora said there is a lot he’s going to miss about the local district, in addition to the walkable commute.

“I’m excited, but also sad to be leaving,” he said.

“I have the opportunity to have a bigger impact on more levels,” he said. “But I’m really going to miss the people I work with here.”

He said his tenure has given him the chance to forge deep relationships in the schools and community.

“When you’re in the position for nine years, you get to know all facets of the community,” he said.

He said he especially appreciates the sense of engagement and stewardship that the community feels toward the schools. That sense of connection was clear in hand-written letters by village seniors regularly left for him in the district office mailbox.

“They were so thoughtful, caring and deliberate, they made me feel good about our school district and community,” he said.

He recalled an encounter in his first week as superintendent that was indicative of that community connection.

“A small, elderly man walked up with a hose, watering the tree out front,” which at the time was just a sapling.

The man, whom Basora would later learn was the late Lloyd Kennedy, founder of the Yellow Springs Tree Committee, called Basora outside.

Basora said that Kennedy then proceeded to educate him about the tree.

“He told me what I needed to do to take care of it, to keep it healthy and strong.”

The experience stuck with Basora.

“It was symbolic of our community and the care it feels for our schools,” he said.

That sense of caring has remained constant throughout his tenure, Basora said, despite a cultural change that he feels has had a negative impact on the schools.

Perhaps the “biggest challenge” that has appeared and grown over the past nine years has been “the onset and influence of social media,” he said.

He finds the online interactions often detrimental — and  persistently inaccurate.

“A good percentage of information on these sites, about our schools, is false information,” he said. “And folks believe it as fact.”

The effect is “divisive,” he said.

Every school district has to contend with social media’s influence, but a few online voices may have more sway in a smaller community than a larger population, Basora said.

On the other hand, Basora feels the district has made positive advances in the classroom.

“I think over the last nine years, we made some really good progress in terms of curriculum instruction,” he said, as the district “moved to a more inquiry-based instruction model,” familiarly called Project-based Learning.

He’s proud that Yellow Springs is widely seen as a leader in Project-based Learning, or PBL, and educators are paying the district to come here and learn more about incorporating PLB in their own schools.

“One of the biggest mistakes I feel like I made, was not investing enough in communication in our community,” he said.

“It might have changed the direction of how the facilities issue” played out, he said

“I’ve learned the value of process as a factor and the value of the inclusion of different viewpoints in the decision-making process,” he said.

The development of the 2020 plan was successful because the process was inclusive from the beginning, Basora said.

And the inclusion of teachers in the early development of PBL “was a huge factor” in its success, he added.

Other lessons learned were more personal.

“When you’re having a really bad day, you need to go hang out with kindergarteners and first-graders,” he said.

“Being around kids in general” is inspiring and a good proscription for finding perspective.

“Leadership is tough,” Basora said. “It can be a very humbling experience. There are very few people in your position. It can be a lonely job.”

He said he has always tried to keep student welfare at the front of his mind.

“My belief is always that if I do what I think is right by kids, no matter what happens, I will have done the right thing. That’s my compass.”

One of Yellow Springs’ main strengths, Basora believes, is a focus on children.

While the community “appreciates education and values learning,” it also “ values the whole child,” he said.

Another strength is the willingness to try new things and not settle on the status quo.

That said, the district has a new strength in the person of Terri Holden, the new superintendent, Basora added.

“I have a lot of confidence in the new superintendent,” he said. “She’s going to be great.”

“She’s a strong leader, a visionary leader. She’s wicked smart, and she will make some positive impacts on our community.”

Basora is hoping that Holden will pick up on work that he feels was left undone during his tenure.

One area in which he would have liked to have accomplished more was “around assessment, especially as it pertained to PBL,” he said.

“How do we assess our successes or failures in PBL? We had dabbled in how to do that, but  didn’t have time to make it the focus in the last couple years.”

“I also would have liked to have seen more funding for athletics,” Basora continued. “Our athletic programs in Yellow Springs are severely underfunded. Our fields are in poor condition. We haven’t quite prioritized it as a valuable thing for our community and kids.”

But the biggest issue left unresolved for Basora concerns the district’s school buildings.

“I think we need to be able to fund our facilities,” he said.

“I believe our current operations do not meet the needs of our students. … As a parent and the superintendent of schools, I think I’m an authority.”

He feels that the failure to pass the combined levy/bond issue last year betrayed the community’s children and its ideals.

“How can we be the eduction village when we have the poorest quality school buildings in southwest Ohio?” he asked.

He agrees with recent statements by  incoming Superintendent Holden that the building assessment results of the Ohio Facilities Construction Commission and the Fanning Howey architectural firm recommending new building construction or major renovations “are facts, and it is time to accept them as facts.”

With that in mind, Basora said that as he leaves, he is recommending to the school board that they put another levy plan on the November 2020 ballot. “And if that levy doesn’t pass, then they should immediately implement a plan to sell” the land on the west side of the Mills Lawn property and the land on the north and south sides of the high/middle school campus, he added.

The revenue from such a sale “should buy us another 10 years” with the current buildings, he said.

“I know some people see it [the potential land sale] as a threat, but it is the only option we have to take care of the schools [without a new levy],” he said.

With that final pronouncement, Basora said he is looking forward to being part of the Yellow Springs community as a parent and private citizen.

“I think it will be great for me and my family to be a little more anonymous in town,” he said.

He’s glad to be raising his two children — who will be in tenth and fifth grades this coming year — in a community full of “amazing people who have lived these amazing lives, who set an example for the younger generation.”

He said that he, his wife, Alice, a local artist, and their children have benefited from many kindnesses shown them over the years — including people dropping off inspirational notes, flowers and food.

“To be around such amazing human beings has been an honor and a pleasure.”

He said he hopes to have the same positive kind of impact in his new position as others have had on him.

Taking the superintendent’s job in Huber Heights will help him do that, he said, giving him the opportunity to affect the lives of more children and their families.

It doesn’t mean he won’t miss Yellow Springs Schools, but “collectively, I feel good about how I’m leaving the school district,” he said.