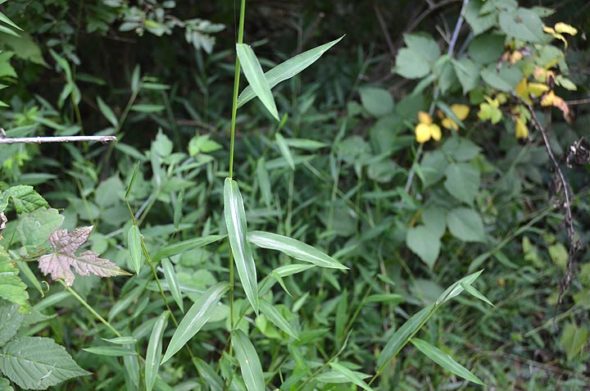 Detail of the invasive Japanese stiltgrass: a silvery stripe down the center, shown here in the close-up, helps distinguish it from other grasses. (Photo by Audrey Hackett)

Invasive of the month— Japanese stiltgrass moves in

The USDA calls it “one of the most damaging invasive plant species in the United States.”

Japanese stiltgrass (Microstegium vimineum) is on the move in Yellow Springs, creeping into yards and forested areas. It’s prolific along the shadier margins of the bike trail south of town. And it’s spreading rapidly in parts of Glen Helen and other area preserves.

An annual grass native to Asia, Japanese stiltgrass was introduced into this country accidentally, likely as a result of the dried grass being used as packing material for porcelain. But far from protecting breakables, this grass is breaking up natural habitats by pushing out many native understory plants.

This month, as part of the News’ practical guide to identifying and removing invasive plant species of greatest local concern, we focus on a pleasant-looking grass with a nasty impact.

If you see a grass one to three-plus feet high with a vaguely bamboo-like look, it might be Japanese stiltgrass. This plant’s leaves are pale to medium green, lance-shaped and one to three inches long. Each has a silvery stripe, located a little off-center from the leaf’s mid-rib. See that stripe — more of a gleam than a hard line — and you’re probably dealing with stiltgrass.

Still, in the experience of this reporter, it takes some careful looking before you can distinguish Japanese stiltgrass from similar-looking grasses.

“You have to become familiar with it and start to look closer” to notice its distinctive features, he added.

The plant’s roots provide another clue. Japanese stiltgrass is so named because its slender, branching roots resemble stilts. Pull a clump out of the ground — it comes up easily — and you’ll see.

And you should be pulling this grass  wherever you see it in your yard, as the information below suggests.

Nothing seems to eat Japanese stiltgrass, according to invasive plants expert Don Cipollini, a professor of plant science at Wright State. Deer don’t like it, so they leave it alone and munch native plants instead. This opens up space for Japanese stiltgrass to grow and spread.

“Deer and invasive plants are a one-two punch,” Cipollini observed.

Japanese stiltgrass is called a “forest grass” because it can grow in lower-light conditions, such as under parts of the forest canopy. It tends not to thrive in sunny areas, but is otherwise very tolerant of different soil and moisture conditions, according to a fact sheet from the Ohio State University.

“Once Japanese stiltgrass becomes established in an area, it can spread rapidly and form dense monocultures that can suppress most native plant species,” the OSU fact sheet states.

When native plant species are crowded out, a cascade of effects occur: there is less forage and habitat for native insects and animals; soil conditions and composition alter; and the ecology of a local area is tipped out of balance.

As with most invasive plants, Japanese stiltgrass gets a foothold, or stilt-hold, in disturbed areas, such as along trails or roadsides.

“It can take over a landscape,” Boutis said. “Do an image search, and you’ll see landscapes where it’s the only plant you see.”

Japanese stiltgrass has shown up in several locations in the Glen over the past four to five years. As the News reported previously, Boutis is sounding the alarm.

“If we don’t take action, it will be like the cursed honeysuckle,” he said in an interview this spring.

The Glen is still refining its management techniques, he added. But for homeowners, there are some simple, immediate steps to take.

Note that the best time to take these steps is right now. Japanese stiltgrass matures late in the growing season. Controlling it by the methods outlined below is most effective just before the plant goes to seed, in late summer to early fall. Start earlier, and seeds in the soil will still have time to germinate. Wait until the plant goes to seed, and next year’s grasses will already be lying in wait in the soil.

A recent walk around the village suggests that the plant has not yet flowered in our area.

Hand-pulling: Where Japanese stiltgrass grows in small, isolated clumps, pull it up by hand. It comes up easily, as already noted, and a small patch can be readily cleared.

“Hand-pulling is most effective late in the growing season before seeds mature. … Pulled plants should be bagged and removed from the site to prevent seeds from maturing after they are pulled,” according to the OSU fact sheet.

Mowing: Where Japanese stiltgrass is well-established in wider areas — the village boasts a few stiltgrass lawns, for example — the grass can be mowed just before it goes to seed. If you mow it after mature seed heads have formed, you’ll be helping to disperse next year’s crop.

“Care should be taken to prevent movement of any above-ground plant parts. Debris from mowing and road maintenance equipment should be disposed of properly,” according to the OSU fact sheet. Bagging clippings and removing them from the property is the best approach.

Note that both hand-pulling and mowing may need to be repeated over a few growing seasons to be effective, as stiltgrass seeds can remain viable in the soil for up to five years.

Finally, when walking the Glen and other forested areas, stay on paths and don’t charge into the woods. Boots, mowing equipment and deer hooves are among the key ways stiltgrass spreads.

Read other pieces in the “Invasives of the month” series:

Read the News’ previous two-part series on the problem of invasive plants in and around Yellow Springs:

Part 1: “‘Green death’ and other invasives”