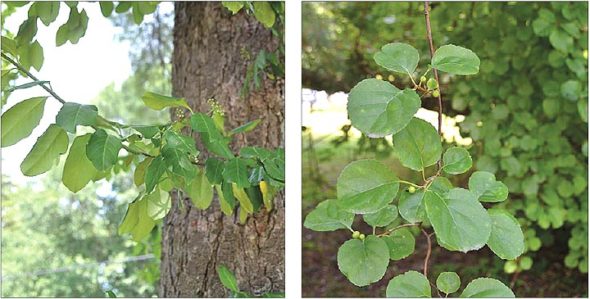 Invasive of the month— climbing vines

Just how pervasive are invasive plants in Yellow Springs?

“Bittersweet is in every person’s yard I’ve been to,” local horticulturalist Bob Moore said in a recent interview.

Asian bittersweet is one of 38 species on the state of Ohio’s official invasive plants list. Plants on the list are banned from distribution and sale. But other invasives, too, are being studied and monitored for their negative impact on the local landscape.

Villager and Wright State professor Don Cipollini, a former member of the Ohio Invasive Plants Council, is currently studying native and non-native species of euonymus. While not on the state’s official invasives list, some species of euonymus are a significant problem locally, he said.

A range of non-native invasives — from grasses and climbing vines to woody shrubs and trees — flourish in local yards and alleyways. These plants can rapidly take over the landscape, pushing out native plant species and depriving insects, birds and other animals of habitat and food. Non-native invasive plants already threaten portions of Glen Helen and other area preserves.

So what to do?

The News is continuing our recent coverage of invasive plants with a new series called “Invasive of the Month.” Each article will focus on one or more invasive plant species, with practical tips for managing or removing the plants. The species have been selected in consultation with Glen Helen.

If you see something green in winter, it’s probably wintercreeper, a non-native invasive species of euonymus. (Another invasive euonymus species, burning bush, notable for its red foliage in the fall, will be featured in a future story.) Wintercreeper is a popular landscaping plant that has been used widely in the village as a “low maintenance” ground cover, according to horticulturalist Moore, who farms 20 acres at Agraria, as well as running a local landscaping service.

“But every planting needs some maintenance,” he pointed out.

Smallish, dark green leaves and dense, creeping growth over the ground identify this plant. Wintercreeper also appears as shrubby growth up to about three feet high. And it can be seen in abundance locally growing up trees, which is when the plant enters its adult phase, changing in form and making flowers and seeds, according to Cipollini.

“This is when you really want to worry about it,” he said.

Asian bittersweet is a little harder to identify, according to Moore. It has oval leaves that “look really similar to everything else,” he said. It’s most noticeable in the fall, when its leaves are off and bright red berries and yellow seed capsules make the plant attractive to some who create wreaths and other ornaments from the vine. Unlike wintercreeper, Asian bittersweet doesn’t grow over the ground, but climbs aggressively over the canopy, to the detriment of trees.

There is also a native species of bittersweet, American bittersweet, that is not invasive in nature, but the Asian variety is much more common locally.

Impact on the local landscape

Wintercreeper is a major problem in the Glen, according to Executive Director Nick Boutis.

“We see a lot of it,” he said. “It’s worse at the Glen than any other nature preserve,” at least by the consensus of area land managers, he added. Glen Helen’s proximity to the village makes the preserve especially vulnerable.

As for Asian bittersweet, that vine is “all over the Glen,” especially in younger woodlands and near the Outdoor Education Center, Boutis said.

Euonymus can spread only so far on the ground, according to Cipollini, making it concerning but ultimately containable. However, when it grows up trees and sets fruit, the plant can be dispersed by birds.

“That’s when it enters pristine landscapes,” Boutis pointed out.

Euonymus climbs, but does not usually choke trees, though trees can struggle due to the anaerobic environment the vine creates, according to Moore. By contrast, Asian bittersweet can be lethal to the annuals, perennials, shrubs, saplings and mature trees it grows up and over.

Bittersweet vines are snaky in form and twine on themselves, forming a heavy mat that can strangle saplings and take down large trees, as well as making trees more vulnerable to wind and ice. Plus, the presence of bittersweet densely woven into the canopy blocks light to grasses and perennials on the ground.

Bittersweet grows zealously, up to 25 feet a year, according to Moore.

For Asian bittersweet, the consensus seems to be: get rid of it. Simply cutting the vine off at the base won’t work, however.

“It will come back with a vengeance,” Moore said.

He recommends digging the vine out of the ground where it sprouts, as well as cutting or pulling it out of shrubs or trees. But because bittersweet wraps its host tightly, care must be taken not to bring down tree limbs at the same time.

Other methods involve using small amounts of herbicide or alternative treatments such as vinegar. Cipollini suggests cutting the vine at the base and then painting the base with an herbicide such as Roundup. Different combinations of vinegar, dish soap and water (recipes are available online) can be used instead.

“I’m not a huge advocate of herbicides,” he said. “But for control of invasive plants that are themselves a form of ecological damage, using a small amount can make sense.”

Those concerned about the impact of herbicides on the local landscape may be able to dig out vines with hard work and tenacity, according to Moore. This is the approach being taken at Agraria, where 1,000 pounds of euonymus was recently cleared by volunteers.

For wintercreeper, opinions differ about whether the plant can be safely maintained as a ground cover, provided it’s kept off trees. Moore, who doesn’t use wintercreeper in his landscaping practice, advocates clipping and mowing existing patches of euonymus on the ground to keep it from spreading.

However, euonymus can form a thick carpet on the ground that prevents the growth of native species. Those who wish to remove it from the ground can pull it up by hand; a shallowly rooted plant, it comes up fairly easily and will die back with repeated hand-pullings and mowings.

Dealing with euonymus that has already climbed trees is a different matter. Once the vine climbs, it must be cut away to prevent its dispersal by birds, according to local experts. Cipollini recommends cutting wintercreeper at its base and painting the base with a small amount of herbicide. Those who wish not to use herbicide can dig out the plant by the root, or cut it repeatedly; over time, the plant will lose strength.

Unlike bittersweet, euonymus vines that remain in the tree can be left there to wither and, eventually, fall away.

Because euonymus attaches to a tree by means of many little “fingers,” pulling them from the tree can strip off bark, which damages the tree, Moore cautioned.

Only young, green vines can be safely pulled away; older, woody ones should be left alone after the vine is cut from the base.

Karen Reed, co-owner of Stoney Creek Garden Center, just north of Yellow Springs, said this week that many of her customers are seeking alternatives to wintercreeper, ivy and other ground covers. She recommends large bushes that tolerate shade or part sun and shade, such as oakleaf hydrangea and native hydrangeas. Boxwood, which is evergreen and does well in shade, is another good option.

“It even grows under walnut trees,” she said.

And then there are hostas. Already abundant in the village, they are hardy and shade-loving. Although not a native species, they haven’t shown themselves to behave aggressively, according to Cipollini.

“They’re not native, but they’re pretty benign,” he said.

The next “invasive of the month” is Japanese stiltgrass, to be spotlighted in August.

Read the News’ previous two-part series on the problem of invasive plants in and around Yellow Springs:

Part 1: “‘Green death’ and other invasives”

2 Responses to “Invasive of the month— climbing vines”