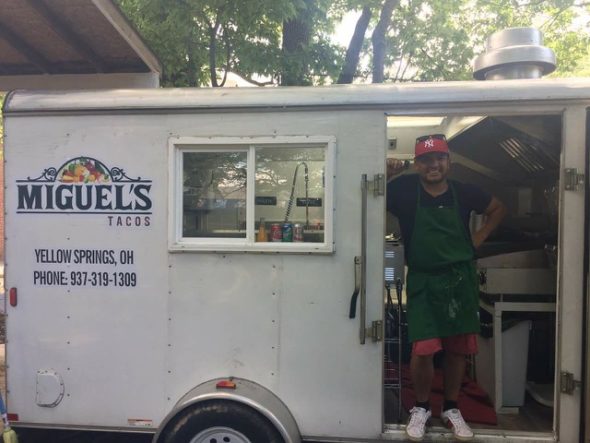 Yellow Springs residents and leaders are rallying in support of local business owner and father of three, Miguel Espinosa, who is being held under Immigration and Customs Enforcement, or ICE, detention following a traffic stop in Yellow Springs early last week.

“He needs to be home,” Espinosa’s wife of 15 years, Yellow Springs native Dawn Boyer, said Thursday, Aug. 29, when a cross-section of more than 60 villagers gathered at Rockford Chapel on the Antioch College campus to discuss her husband’s situation.

The family of five has been locally based for three years, after spending time in New York City and Tampa, Fla., according to Boyer, who said previous attempts to secure legal status for Espinosa, a native of Mexico, had been unsuccessful.

“I thought he would be safe here,” she said of her hometown.

According to police, he did not come to a legal stop at a stop sign before turning left from North Winter Street onto Fairfield Pike.

He was issued citations on that alleged offense, as well as two alleged driver’s license violations.

Past traffic violation convictions on Espinosa’s record, several based on his not having a driver’s license as well as an OVI charge last year, prompted the Yellow Springs officer, Cpl. Mark Charles, to take Espinosa into custody and transport him to the Greene County Jail in Xenia, according to YS Police Chief Brian Carlson, who said the action was standard procedure in cases of such prior offenses.

Local police did not anticipate that Espinosa’s immigration status would come to ICE’s attention, Carlson and Village Manager Josue Salmeron have said separately. Both officials were under the impression that jail personnel contacted ICE concerning Espinosa, and Salmeron said last week that he thought the action was based on new county policy. Carlson, however, said the jail administrator told him this week that the jail has for some time undertaken immigration status checks when there are “red flags,” such as the absence of a Social Security number or a driver’s license.

Keller said that jail records indicate ICE authorities became aware of Espinosa’s arrest through the finger-printing process during booking, and not a phone call from the county.

All fingerprints go into a national database, which alerts law enforcement agencies of outstanding warrants and other related information, Keller said.

The jail then received notice that ICE agents wanted to detain Espinosa.

“Under the federal law, they can arrest someone who is being released from our facility, which was the case here,” Keller said, adding that the Greene County Sheriff, Gene Fischer, isn’t interested in holding people for ICE.

Keller said he did not know why ICE hadn’t noticed when Espinosa was fingerprinted in the past.

In the meantime, local officials learned of ICE’s involvement and tried to rescind the Aug. 29 citations, according to Carlson and Salmeron, but it was too late, ICE agents had already taken Espinosa to Butler County Jail, which has a federal contract to house immigrant detainees.

Espinosa has been held there since. His family is hoping for a bond hearing and a reasonable bond amount that will allow him to come home until his case goes to court.

In a statement to the News Thursday morning, Sept. 5, ICE spokesman Khaalid Walls wrote: “On Aug. 28, ICE deportation officers took custody of unlawfully present Mexican national Miguel Espinosa, pursuant to a detainer previously filed with local authorities. He was previously allowed to voluntarily depart from the U.S. in 2000. Mr. Espinosa has two prior DUI convictions. He will remain in ICE custody pending removal from the U.S.”

News of Espinosa’s detention sparked outrage and distress among family and friends.

Dave Boyer, Espinosa’s father-in-law, grew emotional in speaking about the arrest at the Aug. 29 community gathering.

“I love him; he’s the father of my grandchildren,” Boyer said.

And he questioned the need for the traffic stop that led to Espinosa’s detention, suggesting that Espinosa had been targeted.

“I’m pretty sure his vehicle is pretty recognizable, and people know who he is,” Boyer said of Espinosa, adding that he believes local police were aware of his immigration status.

Although Yellow Springs Village Council stopped short earlier this year of declaring the Village a “sanctuary city,” a designation that signals a municipality’s intention not to cooperate with ICE, Council adopted a resolution that instructs all employees, including police, not to take immigration status into account. And Chief Carlson has said that local police do not detain individuals based on immigration issues.

“I’m trying to wrap my head around [Village] policy with what’s transpired, Boyer said. “Ultimately, he was placed in the custody of people who turned him over to ICE.”

Others at the gathering also questioned whether a white person would have experienced the same police actions.

“I’m pretty certain if I’m stopped for a rolling stop sign, I’m not going to be cited. There’s an obvious double standard,” said Neal Crandall, who is white. Crandall is  also a member of the Quaker Meeting’s Peace and Social Justice Committee and the local grassroots group H.U.M.A.N., both of which helped facilitate the hastily called community meeting.

H.U.M.A.N., the acronym for Help us Make a Nation, works toward undoing racism, and according to the family’s wishes, is serving as community liaison with the family.

Mike Miller, one of the group’s leaders, said that membership on their Facebook page — The H.U.M.A.N. Project — has grown from 270 Facebook users before Espinosa’s arrest to nearly 700.

“That tells me that people really want to do something when it gets this close to home,” he said in a phone call this week.

The group coordinated a letter-writing campaign supporting Espinosa’s case and is putting a meal train in place for his family.

As Dawn Boyer noted on H.U.M.A.N.’s page, “As you can imagine, Miguel [the chef] did most of the cooking for the kids, and I’m sure they miss it.”

Carlson and Salmeron defended local police actions, given standard policies and Espinosa’s record, but also asserted that Village policies need to change so that such unintended consequences did not reoccur.

Greene County records show that Espinosa had three local prior traffic stops in the past three years.

The reason for the first, in the late afternoon of Nov. 14, 2016, is not listed, but the resulting charge was driving without an operator’s license. The officer was Randall “RJ” Hawley, who is no longer with YS Police. Espinosa was found guilty and fined $347.40.

Officer Paul Raffoul made the second stop shortly after 4 a.m. on July 22, 2018, based on his observation that “the vehicle’s license plate light was inoperable, and that the license plate was not visible in the dark,” according to his arrest narrative. After questioning Espinosa, the officer conducted a sobriety check and arrested him on suspicion of operating a vehicle while intoxicated, or OVI.

Espinosa was also charged with driving without an operator’s license and cited concerning the license plate light. He was taken to the Yellow Springs police station, finger-printed there and released to his father-in-law’s custody.

Found guilty in Xenia Municipal Court two months later on all three charges, he was fined $900.64, and incurred a driver’s license suspension until Jan. 20, 2019, for the OVI and driving without insurance.

Espinosa was stopped a third time on Dec. 29, about 7:45 p.m.; his vehicle’s license plate light was again at issue.

This time he was arrested and taken to Greene County Jail, where he was arraigned on a $7,000 bond. Released on bail, he went to court in February, was found guilty and fined $1,247.36, including court fees.

The latest stop, captured on the officer’s dash camera, was also conducted by Mark Charles.

Official charges from the Aug. 26 stop are: Driving while under suspension — failure to reinstate; no operator’s license with two or more priors in the last three years; and failure to stop at a posted stop sign.

“Did he have to go? No. Would anyone have taken him to jail? Yes,” Carlson said this week. “His past record played into the fact that he went to jail.”

The action is considered a deterrent, he said.

In cases of repeated offenses, “a stay in jail changes behavior and ups the seriousness to the offender,” the chief said.

The most pressing question for Carlson, as stated in a public statement released by the Village earlier this week, is how to find “a solution that meets our legal requirements, ensures public safety and well-being of the community, and is sensitive to the dynamics of vulnerable populations.”

Making changes to mayor’s court that would allow more cases to be heard there, rather than in Xenia Municipal Court, would be the most effective means of making certain something similar didn’t occur again, Carlson said.

Village Manager Salmeron agreed that strengthening mayor’s court is an important consideration, though he characterized any change there as “a long-term solution” that would involve hiring a part-time prosecutor.

He also noted that the current police assessment may help address issues of concern raised by Espinosa’s case.

Carlson said he wants to do whatever is possible to help Espinosa and his family resolve the current situation.

“Right now, our mission is to get this  guy safe,” Carlson said.

Dawn Boyer said the family has hired an immigration lawyer in Dayton.

Boyer said that their attorney, Karen Bradley, intended on Thursday, Sept. 5, to submit a motion with the immigration court for a bond hearing to be held as soon as possible.

“It could be two weeks [after that] before his hearing,” Boyer said.

According to ICE records, Espinosa is being held under the name Migael Angel Espinesa-Rodriguez.

In an email Wednesday, Sept. 4, Boyer wrote that she didn’t know where the different spellings came from. She said his full name is Miguel Angel Espinosa Rodriguez, with Rodriguez being his mother’s maiden name.

“That’s how they do it in Mexico,” she wrote.

She hopes that the wellspring of community support helps her husband’s case.

According to her lawyer, only 1% of detainees held in Butler County are “bonded out.”

Holding immigrant detainees is lucrative business for Butler County, which according to a report in Cleveland.com “pulled in more than $11.2 million from ICE between 2012 and 2017.

According to TRACImmigration, which collects immigration-related statistics across the county, about 26 percent of undocumented immigrants have won their cases this year to stay in the country legally. Those deported through Immigration Court proceedings typically are required to wait 10 years before reapplying to return.

Boyer said she is hoping for the best outcome when Espinosa’s case is heard.

“My hope, and Miguel’s hope, is that there is a silver lining in this situation,” she said.

“It’s terrible, but it may be the opportunity to change his legal status.”