The slate of candidates running for the three open seats on Village Council this November is now at five.

Dino Pallotta is the latest to join the field, having made a declaration of intent to be as a write-in candidate by the write-in deadline of Aug. 26. Pallotta owns Dino’s Cappuccinos and is an alternate on Planning Commission.

Last week, the News profiled challengers Curliss and Johnson.  (An upcoming article will feature an interview with Pallotta.) This week, we cover Kreeger and MacQueen, the incumbents.

The third open Council seat is now held by Kineta Sanford, who will not be running in this election.

In recent interviews, both incumbents who are running said they want to build on what they have accomplished and continue projects they started.

For MacQueen, 74, several projects she is involved with are midstream, including a housing plan and a new justice commission. She sees housing and police as the two biggest issues for the community.

Initially elected in 2013, MacQueen is seeking a third term in part because she has found the work rewarding.

“I like being on Council and I think I’m good at it,” she said.

Having lived in Yellow Springs since 1972, MacQueen says she brings to the Council table her knowledge about the community and a perspective on how it has changed. She’s also good at negotiating differences of opinion, she said.

“I work really hard to try to hear what everyone is saying and come up with solutions that honor as many people as possible,” she said.

Kreeger, 61, also wants to see through several projects she started in her first term. For example, she wants to finish a community health assessment and get both a revolving loan fund and community development corporation off the ground. And Kreeger believes she has the skills in collaboration to bring them to fruition.

“That’s what I’m good at — getting things going and getting people together,” she said.

If re-elected, Kreeger would like to focus in her next term on what she sees as the basics: “infrastructure, costs and wellness.”

The last two years have been an enjoyable experience, Kreeger added.

“I love the work. I love the things I’m involved with.” 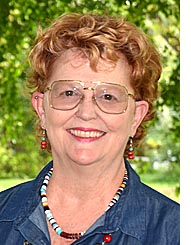 Collaboration is the key to effective governing, Lisa Kreeger believes.

She said that during a career “at the intersection of healthcare and technology,”  she has witnessed collaboration at work. And if re-elected, she would continue to bring together local stakeholders to improve the community.

“Yellow Springs is only so big,” Kreeger said. “If we don’t find a way to work together and to inform each other’s decisions, we won’t advance.”

The new Yellow Springs Community Development Corporation, which Kreeger spearheaded and will have representation from the school district, township and Village, could help local entities do just that.

Change is possible especially for a community as small as Yellow Springs, she believes.

“In large systems of power, the ability to create change is imperceptible,” she said. “There is so much potential here because it’s so small. But it wouldn’t happen without collaboration.”

Another collaborative effort Kreeger led is the community health assessment, which is now underway.

A registered nurse, Kreeger sees an opportunity to do more to meet the health needs of the village. One idea is to start a community paramedic program with a local nurse for the village, in partnership with Miami Township Fire-Rescue. Other ideas may stem from the assessment, a project that Kreeger wants to see through.

“It’s just getting started,” she said of the project. “I couldn’t walk away.”

Assessments are an important way for Council to affect how the local government operates, Kreeger believes. She has learned a lot about the proper role of the governing body in her two years. For example, when it comes to policing, “we have a key role to play in policies and procedures,” Kreeger said.

“Council can’t solve racism in Yellow Springs, but we can do what’s within our scope,” she said, for example.

In partnership with MacQueen, Kreeger said she was instrumental in the policing assessment, which has yet to be finalized. And in addition to helping start the Justice System Commission, she also plans to continue to push for a Citizens Advisory Board, which would investigate complaints against the police.

Kreeger also wants Council to focus on the essentials of utilities and infrastructure.

“It’s about keeping the lights on, understanding what’s under the streets and having a strategic plan for infrastructure,” Kreeger said of Council’s role.

In those areas, Kreeger would like to learn, and share, more about “why the [account] balances are what they are” and what the Village’s critical infrastructure needs.

“We need more clarity about what needs to happen,” she said.

Kreeger said she is glad that the Village is now “in the black” when it comes to its utility funds. At the same time, she wants the numbers spelled out ahead of another planned increase in utility costs in 2020.

Reflecting on her accomplishments, Kreeger highlighted two other projects: starting an investment committee that has increased interest on municipal investments from $30,000 two years ago to $179,000 last year, and reviving the Village’s revolving loan fund.

Kreeger said she’s sticking with her campaign slogan from last time — “listen, engage, advance.” Listening has been a constant of the office; she says she’s averaged five to seven meetings with citizens per week during her first term. She also tries to encourage citizens who air criticism to get involved.

“I would say, would you like to get involved? Don’t just complain, do something.”

Kreeger was born and raised in San Diego, Calif., and moved to the village with her husband in 2007. Currently, she  chairs a nursing program at Capella University and is a faculty member in Antioch University’s leadership and change graduate program, among other roles in the program. She has also been involved in the World House Choir, Village Mediation, the YS Community Foundation and Community Chorus. 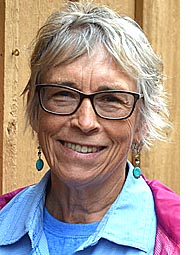 Housing has been MacQueen’s focus during her most recent term.

While the need for more housing has been clear, progress has been slow, she said.

“We’ve had four decades of essentially no — or very little — growth in housing, and some of that has been intentional,” she said.

But change is on the horizon, MacQueen believes. And it’s in part due to her role in several local efforts to reverse the trend of “no growth,” she said.

“We’re starting to turn that ship around,” she said.

For instance, MacQueen organized the Village Manager’s Housing Advisory Committee, a diverse group of local realtors, builders and housing experts. That group, she said, has been a “major accomplishment.”

“We’ve done the background work of what should be in a housing plan, what the available properties are and what zoning changes will increase housing,” she said.

“I’ve basically been leading that effort,” she said of recent housing initiatives.

In another housing accomplishment, Council is now primed to move on the Village-owned Glass Farm, which it has been eyeing for housing for decades, MacQueen said.

Progress is also near in the area of policing, according to MacQueen. A police assessment, which she co-led with Kreeger, is close to complete, and she hopes to get the new Justice System Commission up and running by September.

Policing was, in fact, the first issue that MacQueen addressed as a new Council member in 2014. She is proud to have led the effort to pull the YS Police Department out of the Greene County ACE Drug Task Force. She then worked with former Council member Judith Hempfling to start the Justice System Task Force.

And again, when issues with the police arose more recently, MacQueen took action.

“When we had issues, Kreeger and I requested funding for the assessment,” she said.

Although housing and police are her top priorities, MacQueen also sees the importance of two others: ongoing infrastructure upgrades and an update to the Village’s Comprehensive Plan.

In addressing the Village’s “basic services” like electricity, water, sewer, roads and sidewalks, MacQueen looks forward to implementing a five-year infrastructure upgrade plan. She also wants to keep looking at electricity rates on an annual basis.

MacQueen is on the forefront of working to produce the 10-year update to the comprehensive plan, known as the “comp plan.” As MacQueen sees it, the document is vital to the future of Yellow Springs.

“It puts forth a vision and direction for how we want to be as a village,” MacQueen said. “It’s for land use specifically, but it’s really more than that. It touches on housing, environment, economy.”

The comp plan will incorporate other recently completed plans, such as the Active Transportation Plan, the Housing Needs Assessment and the Climate Action Plan, MacQueen added.

If implemented, those plans portend good things for Yellow Springs, MacQueen believes. But while MacQueen thinks Council has been effective, focusing on fewer ideas might be a better strategy in the future.

“We have had a great Council, if only we are able to start focusing on fewer things,” MacQueen said.

Prioritizing is also important so that Village staff doesn’t “burn out,” MacQueen said. And while MacQueen, who is retired, spends an estimated 20 hours per week on Council business, she worries that might be too much of a time commitment for younger or working villagers looking to serve.

Council Member Kineta Sanford, who would have been an incumbent in the race, will not be running this election, she recently told the News. Sanford has served on Council since December 2018, when Council selected her to fill the vacancy left by the departure of Judith Hempfling.

Sanford said she initially intended to run for the seat, but recently changed her mind for family and work reasons.

Sanford wants to spend more time with her 8-year-old daughter, Nora, she said. In addition, she was recently hired for a full-time position at Home, Inc. as the nonprofit’s outreach and fundraising manager, and wants to focus on that role.

“I just felt like I would be too split up and I wanted to put everything into this new job,” Sanford said.

“Every time housing was brought up I had to tread lightly,” she said.

But Sanford will likely continue participating in local government, perhaps as a member of a commission, she said.

“That’s where I started — service to the community — and that is where I see myself.”

In upcoming weeks, the News will profile Pallotta and the candidates running unopposed for mayor, school board and Miami Township offices.