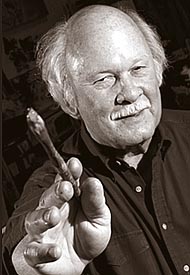 Former Yellow Springs resident Allan Laverne Jones, retired professor of visual arts at the University of Louisiana at Lafayette, died peacefully at his home on Oct. 18, 2019. Born in Fort Worth, Texas in Nov., 1940, he is survived by his wife of 56 years, Glenda Wynelle; sister, Claudia Cushman (Thomas); sister-in-law, Danette Ray (Charlie Clikeman); mother-in-law, Louise Ray; and niece and nephew, Candi Sullivan (Michael) and Kyle Cushman. Allan was preceded in death by his parents, L.L. and Naomi Jones, and his father-in-law, Winfred Ray.

Allan graduated from Northside High School, Fort Worth, and earned a bachelor of science degree from Texas Wesleyan College in 1963. He was awarded a master of fine arts degree from Claremont Graduate School in Claremont, Calif., in 1965.

Allan was dedicated in equal measure to his career as a teacher and his profession as an artist. Beginning at the University of Southwestern Louisiana in 1965, he later taught at Antioch College in Yellow Springs, and subsequently returned to the University of Louisiana at Lafayette in 1986. His tenure at Antioch College, 1970 to 1986, was a formative and enriching experience, one of the highlights of his life.

Advising and encouraging developing artists was Allan’s great joy. The University of Louisiana at Lafayette recognized his commitment to education with the Dr. Ray Authement Excellence in Teaching Award in 2013, and Allan has been named the 2020 recipient of the SPARK Lifetime Achievement in Arts award by the College of the Arts, University of Louisiana at Lafayette.

In addition to teaching, Allan was equally committed to investigating ideas in art, and he produced a large body of work that has received critical attention and acclaim. His work was exhibited in many venues, including New York City, Cincinnati, Dayton, Denver and Lafayette. Working in his studio was always Allan’s preference. He was in his element there.

A memorial gathering celebrating Allan’s life at his Hidden Hills home will be announced at a later date. A family graveside service will be held at Berry Creek Cemetery, Georgetown, Texas. Those who wish may recognize Allan with a donation to the Edith Garland Dupre Library, University of Louisiana at Lafayette; Lafayette, La.