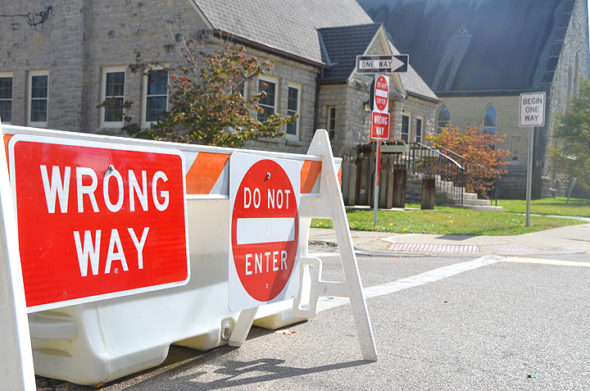 The scene of a traffic test at Short Street, which will be one way for the next three weeks. (Photo by Megan Bachman)

With barricades, cones, signs and new parking stripes in place, the Village of Yellow Springs began a three-week traffic change on Monday.

During the experiment, the Village will test a new traffic pattern around Mills Lawn Elementary School, with South Walnut Street now one way from Short Street to Limestone Street, Short Street one way westbound and no left turns allowed from South Walnut onto Limestone.

At its Oct. 21 meeting, Council addressed the temporary transportation project, which members have said is aimed at improving school pickup and drop off and easing congestion.

Despite a few hiccups, the experiment otherwise got off to a strong start, Village Public Works Director Johnnie Burns noted.

“I think for the first day, it went well,” Burns said.

Early challenges included Short Street inadvertently being turned into a one-way street three days early, on Friday, and on Monday, a semi truck accidentally turning down Elm Street and Short Street having to be temporarily closed, Burns explained.

But, overall, the first day went smoothly, according to Council President Brian Housh, in part due to the presence of the entire Village street crew and numerous officers.

“Regardless of how it turns out, I love how our Village team was out in full force being positive and helpful,” Housh said.

“The feedback I received was positive,” he added of the experiment’s first day. “The chaos predicted was not what I saw.”

Housh also praised the new angled-in parking along Walnut and Short streets, which he said was “long overdue.”

There are now 39 vehicle spaces on Short and South Walnut streets, the same as before, with one less space on Short and one more on South Walnut. There is also a space for bicycle parking on Short.

Burns reported that he would be adding more barricades along Limestone Street, as some drivers were continuing to make left turns, and that US Bank had requested cones, as drivers were parking in their private lot.

Housh also indicated that some villagers had placed plastic bags on signs and  posted on social media that left turns are still allowed onto Limestone.

“I would discourage that kind of attitude and behavior,” Housh said. “It’s not in the spirit of what we’re trying to do.”

In response to a question from Council member Kevin Stokes, Burns said that he did not believe anyone from the Village crew had taken notes on the project’s first day. Stokes urged that data be kept from now on.

“We do want to have the best data we can, for us to assess the success or failure of the exercise,” he said.

Speaking from the floor, Ruth Jordan said that the school district should be involved in solving its drop off and pickup problems and pointed to Fairborn Elementary School as a possible model.

“There are other options we can look at instead of altering traffic patterns,” Jordan said. “I would like those to be tried as well, before we look at a solution.”

In response, Housh, who is the brother of Mills Lawn Principal Matt Housh, said that he would be meeting with the school board president and superintendent with the Village manager to “talk about what a permanent solution could look like.”

Also from the floor, Laura Curliss said her initial experience driving the area was that she was rerouted into residential neighborhoods.

In response, Council Vice President Marianne MacQueen said that on the experiment’s first day she didn’t notice an increase in traffic from her residence on West Davis Street.

Sometime in the next week, the Village will put a survey on its website to gather community feedback on the traffic test.

Items from the Oct. 21 meeting will be in next week’s News.

At Council’s previous meeting on Oct. 7:

MacQueen aired concerns about the assessment both at the meeting and in a memo to Council, raising criticisms about the ways the consultants conducted interviews, the lack of models in the final report and the dearth of suggestions aimed at small communities.

Another problem, MacQueen added, is that the assessment took twice as long as expected — 5 months instead of 10 weeks — and much within the department changed in that time period.

“The end result is that we’ve gone through a flawed process that I hope will give some positive results,” MacQueen concluded.

In the Council meeting, Kreeger was critical of the report for its “lack of specificity.” She also sees room for the police to implement more of its Guidelines for Community Policing.

Salmeron said that while the assessment had received “mixed reviews,” he wanted to implement suggestions in four areas — community engagement; transparency; team building and organizational development; and policies and procedures.

The Council packet also included feedback from YSPD officers and dispatchers, who were largely critical of the report. YS Police Chief Brian Carlson wrote that he appreciated the suggestion about the creation of a police website, something he has long urged, but found the consultants were unprofessional in their interactions.

Several officers did not find merit in the suggestion to create six geographical boundaries in the village, which one officer wrote “seems like overkill for a village of 3,800.” In addition, several were wary of adding a captain position and creating more hierarchy in the department, and also did not think it was necessary for officers to live in the community.

One officer objected to the fact that tensions within the police department were mentioned without an explanation about its root causes under previous leadership. Another objected to the consultants’ characterization of officers’ interactions with citizens as “indifferent” and “with little compassion,” but appreciated the suggestions to add facts to social media discussions and improve police transparency.

Police officers and dispatchers also made positive comments identifying ways that villagers and the department could work together, and were grateful for both the effort to assess the department and the invitation to respond to it.

“This will help us in striving toward our goals of being the community servants that Yellow Springs deserve[s],” a dispatcher wrote.

In a phone call this week inquiring about reasons for the delay, Wasserman said that the firm conducted more interviews than initially anticipated. In addition, a draft was reviewed by both Village and Hillard Heintze lawyers before its release, a process that took some time, he said.

The Village paid $36,376 for the assessment, according to Village Finance Director Colleen Harris this week.

On the related issue of the creation of an official Justice System Commission, Council member Kineta Sanford said there was an initial lack of interest because people are “fatigued.” She proposed that the group be a Village manager’s subcommittee rather than an official commission, and focus on short-term projects.

Housh agreed, and added that a Citizens Review Board is still being considered.

During special reports, Sharon Sherlock of Reach Out in Dayton presented the Yellow Springs Community Health Needs Assessment that the volunteer healthcare organization completed free of charge for the Village.

Sherlock said that while the village has some community health problems, it also has resources.

“There is a culture here that is founded on wellness,” Sherlock said. “If you’ve got a culture of wellness, you keep it.”

For example, the assessment found that 50% of restaurant menu items are vegan in the village, which is much higher than 3 to 4% in nearby Cedarville.

Among the problems noted were the lack of fluoridation of municipal water supplies, the high percentage of women living below the poverty relative to men and the far distance to an urgent care facility, Sherlock said.

The full assessment is available in the Council packet at yso.com.

Following up on a letter he sent to Council, Richard Lapedes proposed from the floor that the Village create a dog park at Gaunt Park, near the water towers.

Lapedes said that since the area is already fenced with access to parking and water, it would be reasonable and cost-effective. He also suggested that villagers help fund its construction.

“I think a lot of people in the community who have dogs would share in the financial burden,” he said.

Housh said he was excited to consider a plan to improve the village’s image as a dog-friendly community, having recently heard an opinion that the village was not.

“That’s not the way others should think of Yellow Springs,” Housh said.

In 2010, Council considered the same Gaunt Park location for a dog park after two high schoolers proposed the idea as a senior project. However, Council backed away when neighbors and villagers objected to the site, citing safety, hygiene, overuse of Gaunt Park and the proposed park’s proximity to residential neighborhoods as concerns. A later proposal for the dog park to be located at Ellis Park also fell through, and the idea was dropped.

Community improvement corporations are nonprofits that promote economic and civic development in an area, and can be “designated” by local governments to serve formal purposes.

Kreeger said the CDC is important because it will improve communication between local institutions.

“It represents a significant collaboration between the school board, township and Village,” she said.

Council agreed to designate two Council members to sit on the board. At least 40% of the board’s members must be elected officials.  The group will also include representation from Miami Township and the school district, although school board members would not be considered elected officials, Kreeger noted.

Kreeger said that she has been working to get the group running for almost two years. The next steps are approving bylaws, securing tax-exempt status and being officially designated by Council.

Council took a stance on housing discrimination. In a 5–0 vote, Council approved a resolution that calls on the Ohio Legislature to pass House Bill 229, which would  “prohibit discrimination in rental housing based on lawful source of income.” Council member Kevin Stokes led the effort.

“Apparently, it’s not clearly illegal for a landlord to turn down a potential renter when they present a housing voucher like Section 8,” Stokes said. “This would make it explicitly illegal.”

The bill is currently in the Ohio House’s labor and commerce committee. Copies of the Council resolution will be sent to its co-chair, Bill Dean, and to Yellow Springs’ state representative, Rick Perales.

Local community access channel, Channel 5, is once again being broadcast on Spectrum internet in the village. The station went down around the New Year, according to Station Manager Sean Devine. The number of local households who subscribe to Spectrum cable is not available, Devine added, but the Village received 10% of total estimated cable sales in Yellow Springs, which were $800,000 this year.

For the second straight meeting, Council held an executive session for the possible sale of municipal property. No votes were taken either time.