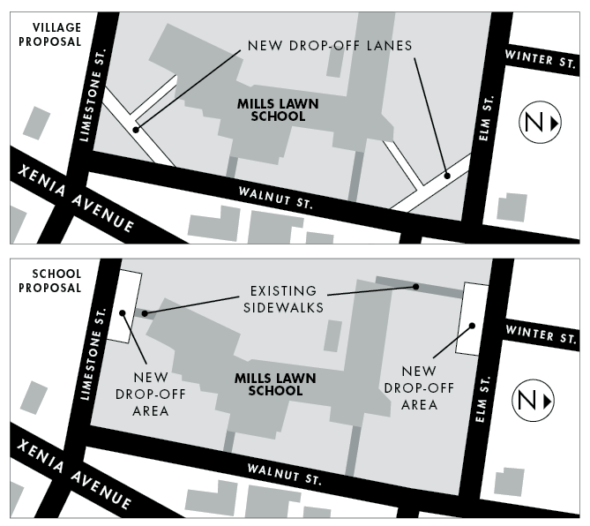 Proposed plans for addressing drop-off and pickup procedures at Mills Lawn School include one from the Village (TOP) that suggested the construction of new drop-off/pickup lanes cutting across the the school property’s front corners, with the addition of connecting sidewalks; and a counter-proposal from the school district (BOTTOM) suggesting that a drop-off/pickup area be constructed on Elm Street, where a sidewalk leading to the school already exists, and the current secondary drop-off/pickup point on East Limestone Street be enhanced.

The first day of the Village’s recent three-week traffic experiment near Mills Lawn School saw “a little bit of chaos” in delivering children to school, Yellow Springs district Superintendent Terri Holden reported at the most recent school board meeting, Thursday, Nov. 14. “But after that [first day], parents seemed to really get the flow.”

Nearly two weeks have passed since the temporary traffic change affecting Short Street and parts of South Walnut and Limestone streets came to an end.

As the Village continues collecting information on the Oct. 21 through Nov. 9 trial, the News is looking at the origins and purposes of the plan. An article last week focused on the roots of the project in the Village Active Transportation Plan, or ATP, and looked at publicly available traffic crash data. This week, the News explores the Yellow Springs school district’s connection to the experiment and some alternative proposals.

In focusing on the traffic patterns around Mills Lawn, the experiment had a direct impact on student drop-off and pickup.

For the duration of the trial, South Walnut Street became one way heading south in front of the school, with a designated drop-off and pickup lane added; and left turns from South Walnut onto West Limestone were prohibited.

Short Street also was made one way, heading toward the school.

School district administrators did not seek the traffic change, but they welcomed the chance to collaborate with the Village in an action that could enhance student safety, district Superintendent Terri Holden said earlier this month.

“Was it [the original traffic pattern] working? Yes. Was it congested? Yes. Were kids not exactly safe? Yes.”

Holden said she learned of the traffic proposal when she first met with Council President Brian Housh after coming to the district this past summer.

“We didn’t ask the Village to do this,” she said.

While she understood that the action was a piece of the Village’s larger Active Transportation Plan, she said she became involved, as was Mills Lawn Principal Matt Housh, during discussions about implementation and logistics this fall.

According to the councilman, more feedback was received on safety concerns along South Walnut Street by the school than any other transportation-related issue.

In a separate interview, Chris Bongorno, a local urban planner who served on the Active Transportation Plan committee, also cited numerous comments about “near misses” between vehicles and school children in that area.

According to Ohio Department of Transportation and Yellow Springs Police records, there has been one documented incident involving a Mills Lawn student being struck near the school in the last five years. The student was not injured.

With the details for the traffic experiment still being discussed in early October, Village Public Works Director Johnnie Burns suggested a proposal for constructing drop-off lanes that cut across the corners at the front of the Mills Lawn property — one connecting Walnut and Limestone and the other where Walnut meets Elm. The Village approached Fillmore Construction, of Leesburg, Ohio, which was in town completing separate Village projects, about submitting a bid to do the work while they were here.

Fillmore said it could complete the work, which also would including constructing sidewalks from the drop-off lanes to the school, for just under $32,000.

Burns proposed the alternative project at a meeting that included school leaders.

District Superintendent Holden said earlier this month that the proposal came to her on a Monday night while she was at a conference in Columbus, and a decision needed to be made by Wednesday.

She said she returned the next day and walked the property perimeter with school district maintenance head Craig Carter.

Holden said that they believed the proposed property cuts would take up more space than the mapped mock-ups suggested. She also questioned who would pay for the work.

The district counter-proposed putting drop-off lanes on the north side of West Limestone, where a drop-off site already exists, and on the south side of Elm, where there is an existing graveled parking area. Both spots also already have sidewalks leading to the school.

The response from the Village, however, was that the proposal would limit parking on Elm Street and eliminate the possibility of adding angled parking there in the future.

Until now, the district’s focus regarding student transportation safety has been primarily on sidewalks and other pedestrian and bike pathways, in connection with the federally funded Safe Routes to School, or SRTS, initiative, which is managed by the state department of transportation. Other recent property assessments also highlighted sidewalks more than traffic changes.

The SRTS program seeks to encourage students “to walk, bike and roll” to school, according to the the local district’s School Travel Plan, which is the local SRTS document. The district wrote its first plan in 2011 and has been updating it regularly since.

Among the goals highlighted in the 2018 plan, the most recently completed, is a call for increasing the number of walkers and cyclists by 25% within five years.

The plan also included the results of parent surveys distributed through the schools, at school-related events and through social media in October 2018, and tallies conducted that same month by Mills Lawn and McKinney Middle School teachers of how students traveled to school.

While most of the survey suggestions expressed the desire for sidewalk construction and/or repair on a variety of streets leading to the schools, they also concluded that “safety should be improved around both schools, highlighting the importance of sidewalks, signage and traffic flow.”

At the time of the study, 355 students were enrolled at Mills Lawn, with about 25% attending through open enrollment, according to district records. That percentage has remained relatively steady for the past six years.

According to the 2018 teacher tallies, more than 65% of Mills Lawn students came to school in a family vehicle. In the afternoon, the numbers dropped by about 10%, with bus riders rising from 10% in the morning to 20% in the afternoon. Fewer than 5% carpooled.

About 10% of Mills Lawn students walked to school in the morning, and more than 15% walked home in the afternoon, according to the report. And about 5% of the student population biked to school.

In terms of roadways, it suggests: “Additional traffic-calming measures, such as speed bumps or raised crosswalks, could also be considered to slow cut-through traffic.”

Specifically, the plan calls for the addition of curb extensions at the northeast and northwest corners of Walnut Street at Limestone “to reduce crossing distance and slow turning vehicles.” The anticipated cost was $55,000, with a proposed completion by 2025. Possible funding sources are listed as Safe Routes to Schools and the Village.

The plan also recommends a redesign of the Walnut/Limestone intersection to connect at a perpendicular angle “to improve visibility and safety by reducing crossing distance and driver speed.” Cost is estimated at $125,000, and completion is proposed for 2027.

In addition to the district studies, recent property assessments by the Ohio Facilities Construction Commission, or OFCC, and the engineering firm Fanning Howey had little to say about the Mills Lawn drop off. The OFCC report, completed in 2017, recommended providing “an appropriate area” for bus drop off and pickup  as well as improving the sidewalks. The Fanning Howey report, completed the following year, suggested a reconstruction and expansion of the Limestone Street drop off, with a 2018 price tag of about $11,000.

During the temporary traffic experiment, some villagers raised questions about the school’s procedures and policies, suggesting behavior changes would improve student safety better than traffic modifications.

The current scenario is this: Mills Lawn starts the school day at 8:15 a.m. and dismisses students at 2:45 p.m. Students are allowed in their classroom at 8:05 a.m. Busses drop of and pick up students behind the building, and all other students are instructed to enter and leave the building at other doors. The main entrances are at the front of the school and at a side door off of West Limestone street.

The Mills Lawn handbook instructs students arriving or leaving in family cars to exit and enter vehicles on the sidewalk side of the car. Parents are asked to pull up to the school with their vehicle pointing south on South Walnut and west on West Limestone.

The handbook is given out at the beginning of the school year and is available on the district’s website.

Superintendent Holden was unaware of information specific to drop-off and pickup being distributed separately at the beginning of this school  year, though the schools sent out several notices alerting families to both the beginning and the end of the traffic change experiment.

A representative of the Yellow Springs Police Department, often the chief, is generally present each morning to aid safe drop off, in addition to the sixth-grade crossing guards stationed at nearby intersections.

In a letter from YSPD Chief Brian Carlson included in the 2018 School Travel Plan, he writes: “For students who are dropped off by car, we would strongly encourage parents to drop off their children so they exit the vehicle on the Mills Lawn side.”

Holden said that drop-off and pickup are slightly different experiences in that drop-off occurs in a concentrated 10- to 15-minute time period, while pickup is more extended.

The School Travel Plan recommends better enforcement of the drop-off/pickup policy, but doesn’t specify how.

Asked at this month’s school board meeting to assess the traffic experiment, Mills Lawn Principal Housh, said he thought “it was really successful.”

Once families got through the initial uncertainty of the change, “there was a notable difference in having a designated drop-off lane,” he said. “It improved the flow.”

He said he also appreciated the move from two-way to one-way traffic on Walnut.

“When it’s one way, there’s just one place to drop kids off,” Housh said.

As far as feedback, he said the drop-off lane was well received by parents, who he said have requested that a drop-off lane be reintroduced.

School Board President Steve Conn said that he appreciated the Village’s work on the district’s behalf.

“We were really delighted to be working with the Village,” Conn said, speaking for the board.

District representatives agreed that they’re looking forward to learning the results of the Village’s survey.

“I also hope we can get the drop-off lane back,” Conn said.