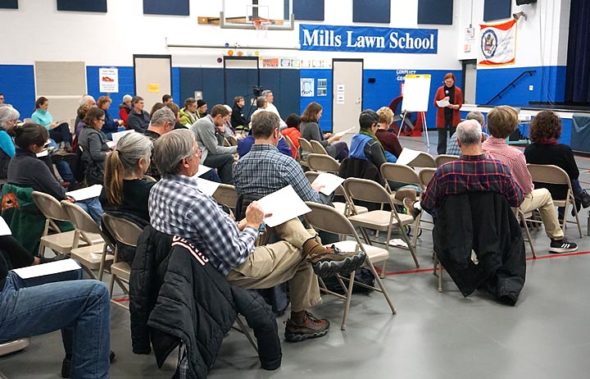 About 50 people (25 to 30 of whom were community members) attended a community meeting Tuesday, Dec. 10, hosted by the school district’s Facilities Task Force, which presented its findings and recommendations after a 10-month exploration of local school building needs and then solicited questions and feedback. The group’s facilitator Mel Marsh, of the Springfield-based Acorn Consulting, spoke on behalf of the task force. (Photo by Carol Simmons)

About 10 months since its first meeting in March, the School Facilities Task Force hosted a community meeting Tuesday, Dec. 10, to share its findings and potential recommendations to the school board and to take questions and feedback from community members.

The task force, formed by the district after voters rejected a 2018 levy to pay for a proposed renovation/rebuild project at the high/middle school campus, expects to give its final recommendations to the school board early in the new year.

Primary among its preliminary conclusions, presented at the Dec. 10 meeting, was the belief that “the best way forward” for the district is to fund improvements in the existing school buildings, rather than rebuilding or near complete replacements. Group members also feel that more money needs to go into building maintenance, recommending that the school board seek an increase in permanent improvement levy funds.

About 50 people were in attendance at the meeting in the Mills Lawn gym, but after taking into account the 12 current members of the task force, the five school board members, the school principals and a handful of teachers and staff, the number of community members, between 25 and 30, was smaller than anticipated.

“I thought there would be more people,” Superintendent Terri Holden said this week.

School board member Steve McQueen said afterward that he would have liked to have seen more parents attend.

Task force facilitator Mel Marsh, of  Springfield-based Acorn Consulting, led the scheduled 90-minute meeting. The first half featured a PowerPoint presentation summarizing the task force’s work and findings and the second half was given to questions and comments.

The mood of the gathering was inquisitive and amiable, with a sense of concern about costs and the district’s next steps. A number of community members prefaced their comments with thanks and appreciation for the task force’s efforts, and a majority of questions focused on student safety and potential methods of financing.

Marsh said in her opening remarks, however, that looking at costs and funding was not part of the task force’s work.

She did not go into the group’s decision this past summer to focus its efforts on identifying and prioritizing the problems and issues at both school campuses. That decision, previously reported by the News, was influenced by Superintendent Holden’s recommendations. The members, drawn from various community constituencies, determined that they did not have the expertise to come up with solutions or identify their potential costs.

The task force included a mix of community members, some of whom had been in favor and some against the 2018 levy, and included parents, grandparents, teachers, staff, students, a school board member, the architect on the previous effort and the superintendent.

“We identified problems to address rather than designing new schools or new additions,” Marsh reported.

“We were not charged with designing how to address the improvements we recommend [or] determining the cost of the recommended improvements.”

The group began its work by visiting both school campuses “to experience the facilities ourselves,” Marsh reported.

They also conducted focus groups with faculty and students, surveyed the community about the 2018 levy, invited the district treasurer to give a presentation on the district’s tax levies and how they work and asked the school board for more clarity on their perspectives about the future of K–12 education and the future of Yellow Springs schools.

They heard a presentation from the engineering firm Fanning Howey that conducted an independent assessment of the district’s facilities; heard from architect Mike Ruetschle about the failed 2018 proposal; and listened to a presentation about alternative options from local building inspector David Roche. They also met with the district’s heads of maintenance and technology.

After gathering information from the varied sources, they revisited the school buildings, accompanied by the principals and maintenance director.

Then, using the Fanning Howey report and requests from teachers, staff, students and principals, they put together a prioritized list of identified needs.

They considered those needs in relation to five “guiding principles”:

• Designed for 21st-century skills and learning

From the early community survey and subsequent conversations with neighbors and acquaintances, the task force learned that community members came away from the 2018 levy defeat with a perception that the school board did not listen to the community or communicate with the community. They also found that residents were turned off by what they perceived as scare tactics by the board and levy committee, by the focus on the middle/high school campus without consideration of Mills Lawn and a lack of maintenance attention, among other concerns.

At the same time, they learned that “Yellow Springs residents remain passionate about the schools,” Marsh said. “Our schools are essential parts of the Yellow Springs community. They contribute to our identity as a village.”

The task force also came to feel that “there are real problems that must be addressed,” Marsh noted.

Other major conclusions by the task force:

• Affordability and the environment are serious considerations for YS residents;

• Maintenance has been underfunded, reactionary and inadequate;

• Modular classrooms must be replaced;

• Modern security needs are not being met.

Marsh added that teachers and administrators work hard to find alternatives to problems and deficiencies and that “the district does wonders with the resources available.”

• Both school campuses are not energy efficient, which wastes money;

• Both schools have plumbing problems;

• Both schools have inadequate kitchens and cafeterias.

“Our students and teachers deserve better” than what they have, the task force concluded.

Toward that end, the task force is settling on a list of recommendations — which will be informed by community input.

As of the community meeting, the group felt that “the best way forward is to invest in significant improvements to both buildings rather than near complete replacements,” Marsh reported.

At the top of the group’s improvement list is replacing the modular units at both schools — the middle school’s “shoebox” and the unit behind Mills Lawn.

Additional improvement recommendations focus on the problems identified above, though the task force did not specify details for those improvements.

Under security, they call for attention to both outside and inside the buildings, adding cameras and adding a recognizable front entrance with a secure vestibule to the high school and a secure entry vestibule at Mills Lawn.

For energy efficiency, they recommend improvements to the roofs, walls, windows and doors. They also call for air conditioning in the high school gym.

They recommend renovations of the kitchens at both schools and an increase in cafeteria and serving line capacities. Upgrades to the electrical system, restrooms and technology systems are also recommended among the high priorities.

Marsh noted that the recommendations shared Dec. 10 represented compromises among the task force members, but that all members agreed to each one. The recommendations were informed by all five of the “Guiding Principals,” but “health and safety, maintenance and affordability were the primary drivers of our decisions,” she said.

“Students need to be safe, secure and ready to learn,” Marsh said.

In opening up the floor to questions and comments, Marsh urged those in attendance stay focused on the future.

“I want to remind you that we can’t change the past,” she said.

Celia Diamond identified herself as the grandmother of three students in Yellow Springs schools.

She said that she appreciated the task force’s work, but she didn’t find the group’s recommendations very “exciting.”

“But I approve of them all,” she added.

She said her main concern was the absence of a “severe weather shelter and fire protection” among the listed security suggestions.

Dorothee Bouquet, the parent of a kindergartener, said that security was also a concern for her.

She noted that her daughter’s classroom is the first inside the front door, and she worried about her vulnerability in the case of an active shooter.

Dave Turner, the parent of local graduates, said he thought some of the district’s security concerns represent “overblown fears and fear mongering.”

That aside, he said he wanted to see more detailed plans for the facilities’ needs.

“These are vague statements,” he said of the task force’s report.

He said he also wanted to see more financial information.

“I would like some quantifiable data,” including an analysis of what would be gained if the district sold some of its property assets, he said.

Concerning potential property sales, Mills Lawn neighbor Carol Young said she hoped that the district “will come to the community for comment before that is pursued.”

She added that she and her husband had attended several of the task force meetings and accompanied them on their tour of Mills Lawn, and she wanted to assert that “everybody [on the task force] was working really hard.”

She also came to the conclusion that the  school buildings need work, she said.

“It’s very easy to sell something off, but very hard to get it back,” he said. “At the end of the day, you’re giving away a huge asset.”

Parker Buckley, like Turner, said he wanted to see an analysis of revenue should land be sold.

Local resident David Goodman asked about the potential of securing federal and state grants for some of the recommended work.

Superintendent Holden said that few such grants of any significant amounts are currently available, but the district is looking out for other revenue possibilities.

“I believe that the most important thing we can do is collaborate across the critical stakeholders — the school board, the Village, Antioch College, the [Yellow Springs] Community Foundation,” she said. “We all have assets of different sorts. … Speaking for the Council, we are very committed to active collaboration.”

Meeting participants also wanted to know what comes next.

Marsh said that the task force would continue to take comments — in person or by email to facilities@ysschools.org — and they planned to meet again soon, to reflect on the Dec. 10 meeting. Several task force members are also planning to host individual meetings to gather further community feedback.

The Dec. 10 meeting was videotaped and the video is to be posted on Youtube, though it is unknown when it will be uploaded.

Once the task force makes its recommendations to the school board, the board will be responsible for determining how to move forward. And while their work will be done, several task force members have expressed interest in staying involved in the process.