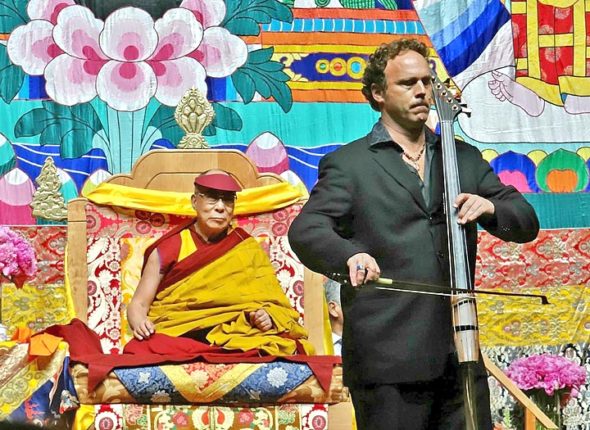 Cellist Michael Fitzpatrick will return to Yellow Springs, where he spent his early elementary school years and had his first music lessons, to present a Solstice Concert on Sunday, Dec. 22, 6 p.m., at House of AUM. Suggested ticket price is $25, with proceeds benefiting Millenia Music, Fitzpatrick’s nonprofit. For more than 20 years, the classically trained cellist has had a musical relationship with the Dalai Lama, pictured here with Fitzgerald at one of their joint appearances.

Cellist Michael Fitzpatrick, like other musicians of a certain performance tier, can list multiple concert experiences from around the globe. But Fitzpatrick, who spent nearly five formative years as a child in Yellow Springs, may be the only one to have orchestrated a performance literally in the Earth.

In 1999, at the dawn of the new millennium, Fitzpatrick brought together Western and Eastern spiritual leaders, including the Dalai Lama, along with musicians, including Tibetan multiphonic singers of Drepung Loseling Monastery and Gregorian chanting Trappist monks from the Abbey of Gethsemani, and took them underground, into Mammoth Cave in Kentucky.

There, combining sonic traditions from around the world, the musicians played, sang and chanted with the intention of creating peaceful and healing vibrations in harmony with the earth.

Fitzpatrick’s solo cello invocation for the project, an original composition that has become a signature piece in his continuing focus on music as an agent of peace and healing, will be among the works featured when the classically trained musician returns to Yellow Springs to perform a Solstice Concert on Sunday, Dec. 22, at House of AUM. The suggested ticket price for the 6 p.m. concert is $25, with proceeds benefiting Fitzpatrick’s nonprofit organization, Millenia Music.

In a phone call this week from his current home near Woodstock, N.Y., Fitzpatrick said he is thrilled to be coming back to Yellow Springs, “the place where it all began.”

The family stayed here until 1974, when the elder Fitzpatrick, who died in 2015, took the chairmanship of the art department at the University of Kentucky in Lexington.

He spent one, “if not two,” years in kindergarten at the Antioch School and then attended first through third grades at Mills Lawn.

“It was like yesterday,” he said of those early years. The family rented a farm house on a 250-acre property near Young’s Jersey Dairy, and Fitzpatrick remembers playing outdoors and exploring the countryside.

With artistic “bohemian” parents, the house was full of art and music, but Fitzpatrick traces his own music-making to longtime local teacher Shirley Mullins, though the route was a bit circuitous.

He recalled that an aunt wrote to him that she had found a “great deal” on a gold flute and wondered if he would be interested in having it and taking lessons.

Mullins told his mother, Ruth, that the school already had plenty of flute players, might her child consider cello?

“She came home with a cello,” Fitzpatrick said.

“Let’s just try it,” the mother told her dubious son.

He started lessons, and never stopped.

Fitzpatrick’s love for performance, however, came by way of another mentor, now retired longtime Mills Lawn kindergarten teacher Becky Brunsman, who was then the school’s music teacher.

Brunsman asked him to sing a solo at a school performance, a piece from the Broadway musical “Carousel.”

The memory is a fond one for Fitzpatrick, who, looking back, sees the gently supportive way Brunsman helped him prepare.

And the performance was transformative.

“I started to sing,” Fitzpatrick recalled. “This electrical current – it just filled my body. It was the power of music for real.”

He felt that same electric power in a cello performance at the Eastern Music Festival in Greensboro, N.C., when at 17 he won the concerto competition there.

“It was an other-worldly” experience, he said. “I felt the power of music. That’s when I fell in love with [playing the cello].”

Where before he knew he had an aptitude for the instrument, he now felt he was being offered a gift.

He said he thought, “I’m going to say yes to this, and I’m going to follow it where it leads me.”

Where it’s led has included a now 23-year musical relationship with the Dalai Lama, which began as an invitation to play as part of a single gathering.

“The emotion induced by Michael Fitzpatrick’s music is so powerful, it seems almost verbalized. His sound is Clear Light,” the Dalai Lama has been quoted as saying.

The cellist also has performed for Pope Francis, former President Jimmy Carter, and the decoder of the human genome, J. Craig Venter.

He said that the powerful energy he feels in music is palpable in the presence of the Dalai Lama.

And he believes that energy — through music, through spiritual awareness — can transform the world.

Fitzpatrick paraphrased a quote generally attributed to St. Teresa of Avila in describing his life’s journey.

“God moves straight through crooked lines,” he said with a laugh.

He said he holds onto another quote, as well, attributed to the late cellist Pablo Casals: “It is music that will save the world.”

That belief is what Fitzpatrick had in mind when he went into Mammoth Cave, “into the womb of the earth.”

Achieving the peace that leads to transformation is an internal journey first, he said.

His intention for the Dec. 22 concert at House of AUM is to provide a space where the internal journey can occur.

“All the faith traditions espouse that when we gather, that’s when we discover our collective energy, the collective consciousness,” he said. “Music is the catalyst to open up our heart space.”

In addition to the “Compassion” project’s invocation, the concert will include works by Faure, Ravel and Bach.

Fitzpatrick envisions the experience as “less of a performance and more of a sonic meditation.”

It is a natural time to envision the world we want to create.

“There’s a profound sense of coming full circle,” Fitzpatrick said not only in the turn over of years, but also in his returning to Yellow Springs.

Tickets for the Solstice Concert with cellist Michael Fitzpatrick, at 6 p.m. Sunday, Dec. 22, are available online at http://www.eventbrite.com/e/cellist-michael-fitzpatrick-winter-solstice-concert-tickets-83029773287.