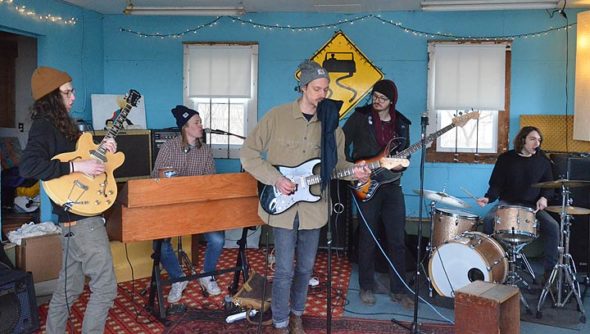 The mid-century critic Theodor Adorno once said there can be no poetry after Auschwitz.

Almost 80 years since the unspeakable horrors of the Holocaust, the world continues to host profound destruction and violence. And yet, how many poems have still been written? How many paintings have been made? How have artists mustered the gall to make something when others have gone hungry, died without a home or have suffered at the hands of a ruthless politician?

What I think Adorno meant was not that artistry ought to be foreclosed in the wake of tragedy or as others stare down the barrel of oppression, but rather that artists of all stripes and media bear a kind of responsibility to grapple with these things — to not shy away from them.

Art, above all else, is inherently political. It ought to speak some semblance of truth to power.

With the release of their newest record, “Terrestrial Year,” Yellow Springs-based band Speaking Suns does exactly that.

“Terrestrial Year” situates itself in the material conditions of a world on fire, a political timeline gone awry. Coupled with aggressive and driving instrumentation, the album’s lyrics read as scathing indictments of capitalism, systemic violence and alienation. This damning language, delivered sometimes with a forceful ire, sometimes a crooning tenor, sounds out with athletic clarity.

“As a group, we’ve had millions of conversations about wanting to incorporate more meaningful messages,” Diebold said in a recent interview.

“Nowadays, indie rock is full of throw-away ideals. If we’re going to be just another white-boy band from the Midwest, then let’s at least say something worthwhile.”

The new, radically bent approach to message-making of “Terrestrial Year” meets the ear right off the bat. In the first track, “Free,” Diebold lays into the “violent truths that surround” us, the everyday brutality of politics and the inevitable complacency we all feel not long after the initial outrage of an injustice. With references to the L.A. riots in 1992 and the more recent deposition of foreign leaders, all set to the backdrop of a breakneck-paced rhythm, “Free” conjures up the same feelings of hopelessness and anger one gets when scrolling through the morning’s headlines. Indeed, as the song suggests, daily violence “is something you get used to.” It’s what’s for breakfast.

“Routine,” the seventh and longest track on the album, functions in a similar way. The purposefully repetitive lyrics and melody thrust listeners onto a treadmill going nowhere, with the whole rotten rat race whooshing by. But “Routine” decries more than just the banality of a day-to-day rut. In his characteristic croon, Diebold also disparages the “routine violence, routine silence, routine bullet for a traffic violation.” Breaking the repetition, he adds, “It’s not broken, it is working the way it was meant to.” In this way, “Routine” evokes the image of a never-ending strip of film, furiously flying off the reels, showing bloody scene after scene of miscarriages of justice, businessmen averting their gaze, just to get to work on time.

These political overtones stand in contrast to the messaging in the group’s previous two records, “Vanishing Country” of 2014 and “Range” of 2017 — both of which seemed to prefer introspective themes such as existentialism, disillusionment, emotional vagrancy, and the like.

Not to mention, the overall sound itself has also shifted a considerable amount between this album and its predecessors. Speaking Suns has moved away from their old formula of stretching out sonic dreamscapes as far as they can and layering texture after texture. Now, their songs are short and direct. With most songs clocking in at just over two and a half minutes, they now have a punk-esque economy.

Diebold said this conceptual and sonic about-face between the first two albums and the third was intentional, that the form should match the content. So, yes, “Terrestrial Year” gets loud.

But, not every track is as politically on the nose. “Terrestrial Year,” in typical Speaking Suns fashion, occasionally retreats inward — just as we all do when the going gets rough. Songs like “Fade Away,” “Paths” and “Symbol” feel moony and remote. In their own ways, they offer a kind of respite from the maddening world outside. But despite the shift in tone from the other, angrier and resentful tracks, these tunes still feel intimately a part of the overall tapestry of the album. They almost always exist in a comfortable dialectical tension with the polemical side of “Terrestrial Year.”

To be sure, though, these more ethereal tracks aren’t overly escapist or even aimless in any real sense. They’re still working toward something — they call to the fore the recurring protagonist found throughout the whole record, and even the entire Speaking Suns catalogue: time.

As Diebold put it, “I’ve heard artists say that every painting they make, no matter how different they look, is about the same thing. That’s true for us. We’re always writing songs about the passage of time, just from a different view.”

This record, like the others, doesn’t seem to lament the impermanence of life or the fleeting moments within, but instead, works to accept, maybe even celebrate, the ephemerality of time.

And why should Speaking Suns balk at time passing them by? It’s been nothing but generous to them since they formed nearly seven years ago, albeit with a slightly different cast of musicians. They have since toured the country nearly half a dozen times; played at numerous festivals, including Waynesville’s Bellwether Festival, where they shared the stage with national headline acts like The Flaming Lips and Echo & the Bunnymen; released several music videos with thousands of online views; and, to record their newest album, played at Treehouse Records in Chicago, a renowned studio that’s also put out music for marquee groups like Cage the Elephant, Albert Hammond Jr., and the Violent Femmes. Mark these words: Speaking Suns is not slowing down anytime soon.

Overall, “Terrestrial Year” is a profound conceptual departure from what Speaking Suns has previously released. In their sincerity and their sound, the band seems to have matured a great deal. The group does a fine job of capturing the infuriating disorientation of living in a hectic century. They shine a light on so many sins of society, and without pretension, they force listeners to ponder “What is to be done?” and “What is progress?” “Terrestrial Year” is a well-oiled, tightly-wound machine that, in spite of its intricacy, is working exactly the way it is meant to.

Speaking Suns released “Terrestrial Year” on most major music streaming platforms on Jan. 31. Their next Yellow Springs show will be Friday, Feb. 21, at 10 p.m., at Peach’s Grill. You can download and hear more music by Speaking Suns at their website, speakingsuns.bandcamp.com.