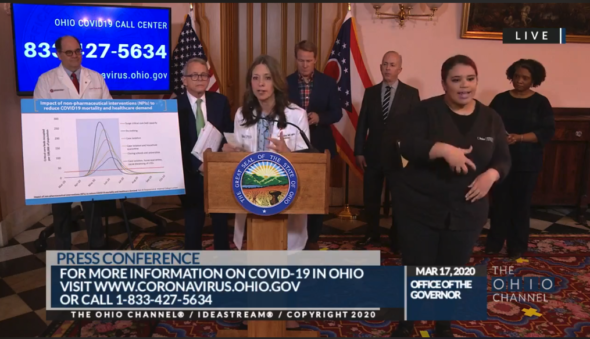 Video still from the March 17 governor's press briefing on COVID-19 in Ohio, live-streamed at ohiochannel.org

The day prior, DeWine had recommended that elections shift from March 17 to June 2, with voting by absentee ballot permitted in the meantime. But a Franklin County court denied the move in response to a lawsuit seeking a postponement of voting due to the statewide health crisis involving the spread of COVID-19.

“Our goal is that everybody who wants to vote can vote,” DeWine said at today’s briefing.

Details on how that can happen will need to be worked out by the Ohio legislature and courts, he added.

The state today announced a move to restrict “elective surgeries,” those not required to save lives or prevent significant illness. Doing so would both conserve the state’s supply of personal protective equipment, or PPEs, which are in seriously short supply, and free up hospital beds for treating those with COVID-19, according to Ohio officials.

As of today, just 17 people in the state are hospitalized for the virus, though the state is bracing for a “hospital surge,” according to Ohio Health Director Acton. Acton reported that Ohio now has at least 67 confirmed cases of the illness in 16 counties.

No cases have been reported yet in Greene County, however.

Acton also specified today that Ohio has received $15 million in federal assistance for combatting COVID-19, $10 million of which is being distributed to local health departments.

Regarding PPEs, the state has received its full allotment from the national stockpile. That allotment is “very, very small,” Acton said, citing an unspecified figure in the “100,000s, not millions,” in response to question from media.

During today’s briefing, Acton also addressed a just-released report from British scientists that suggests that 2.2 million Americans could die nationwide from COVID-19 if widespread measures are not taken to stem the spread of the virus. However, Acton said, many measures are being taken, and these actions may be able to “cut that by half.”

To read a fuller report on today’s briefing, see the March 19 issue of the News. This special issue is devoted to coronavirus coverage, and will be going out to all villagers, thanks to support from the Yellow Springs Community Foundation.

Summaries of the governor’s daily briefings will continue to be posted here at the News website.