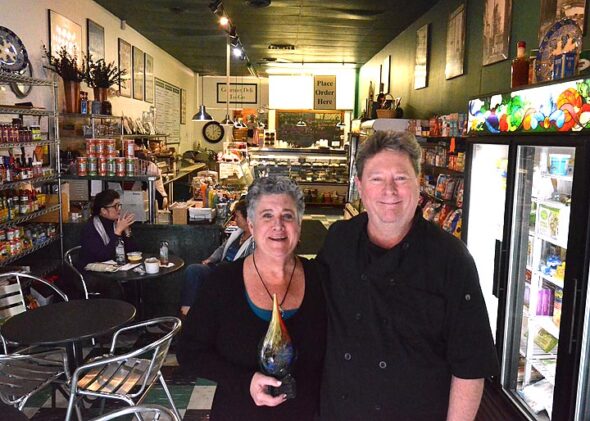 Current Cuisine co-owners Karyn Stillwell-Currrent and Steve Current were honored with the 2020 Community Impact Award at the Yellow Springs Chamber of Commerce’s annual meeting last month. Here, they proudly held their award in their downtown shop, which they’ve run since 1989, a few years after starting a local catering company in town. (Photo by Megan Bachman)

Catering to the village since 1983— Current Cuisine wins award

Their hummus is legendary. Their soups and sandwiches are an ever-popular local lunch option. And their spinach squares, sun-dried tomato dip and lemon bars are ubiquitous at local parties and fundraisers.

Current Cuisine has been a part of Yellow Springs since 1983, when it was a small catering company run out of the former Bryan High School cafeteria. And since 1989, its downtown shop has been a popular spot for prepared foods, meals and international groceries.

Now, 36 years later, the business’ owners, Karyn Stillwell-Current and Steve Current, are being honored for supporting — and feeding — their community.

Chamber Director Karen Wintrow said the couple was chosen for their entrepreneurial resilience, as well as for “how they had a dream based upon their mutual love of food and each other.”

“They feed the community and beyond, whether daily from the deli or while catering large events,” she added. “They give back to the community generously with donations and sponsorships. And they share their love of food and delicious food with us every day.”

Stillwell-Current, 65, and Current, 60, were surprised by the award, they said in a recent interview. Reflecting on their three decades in the village, they said they are humbled at the special place the store has played in people’s lives.

“It’s really cool being a part of the village’s holidays and celebrations,” Stillwell-Current said.

“It’s not a party in town unless you walk in and see a pound of our hummus.”

The history of Current Cuisine can be traced to another legendary local food establishment — the Winds Café. The couple met while working there in their 20s; she was a waitress, and he a cook.

At the time, the Winds was in its former location, 230 Xenia Ave., where Asanda Imports is today, and regularly serving up its popular dish, chicken cashew.

Current, a Xenia native, had come to the Winds from The Apple Tree, a restaurant along State Route 235 near Hilltop Road that he helped to build — literally. Prior to that, Current graduated from the culinary program at Greene County Vocational School.

Stillwell-Current, meanwhile, made her way to Yellow Springs from Kettering. She had spent time in the village in her youth, and actually dreamed of someday opening a little shop here.

“I always wanted to live in Yellow Springs,” she said. “My dream came true.”

Soon after the Winds employees became a couple, they set off on their own culinary adventure, during which time they also raised two sons, Johnathan Stillwell and Andrew Stillwell-Current.

Looking to start a catering company, they approached then-Village Council Member Tony Bent about renting a kitchen space at the John Bryan Community Center, which as the former high school had yet to become the Village offices.

“The high school was sitting empty. [Tony] said let’s give these guys a chance,” Current recalled.

Current Catering was born, with Steve doing the cooking and Karyn handling the business side. They catered an increasing number of local occasions. And it wasn’t long before the two were preparing for their very first Street Fair.

“We cooked up two pots of Mexican beans and rice, and that was that,” Current said of the now twice annual tradition.

They haven’t missed a Street Fair since, and their signature Street Fair dish has only changed slightly, to loaded vegetarian black bean nachos.

Five years later, in 1989, the couple had the opportunity to take their catering company downtown. Bruce and Carol Cornett sold them their small produce shop at 237 Xenia Ave., then known as the Village Green Grocer.

An ad in the June 1989 edition of the Yellow Springs News notes the change in ownership and touts the offerings of the newly christened Current Cuisine — “finer foods, groceries and catering.”

While continuing to sell the prior businesses’ selection of produce, cheeses and other items, the couple put in a commercial kitchen in back. In addition, they started making sandwiches to order for the lunch crowd.

It became a deli/shop and catering company, with food going out both the front and the back of the business.

And although it can sometimes be a challenge to run both, it’s also helpful when dealing with an evolving marketplace.

True to its name, Current Cuisine has kept up with changing times.

“You’re always moving and changing — we are Current Cuisine after all,” Current said.

That has meant discontinuing some products — like fresh produce, and adding others, like prepared holiday meals, which sold more last year than ever before.

A major change came in 2002, when the shop was completely remodeled. The most significant upgrade was the addition of the deli case, with its wide variety of prepared food offerings. On a recent visit, the case featured egg salad Florentine, curried tofu salad, stuffed clams, BBQ meatballs, broccoli salad and more. Soups took off; African chicken peanut has since been their most popular. And daily-changing lunch specials have been a big hit.

The couple has also continued to hone the store’s selection of international and gourmet groceries, oriented to the home cook and often the same products Current uses in the kitchen.

Plans to grow some of their own food, however, didn’t pan out. Despite the idea of doing so after they moved out to a farm near Wilberforce-Clifton Road, they never could find the time.

To keep their customers — and themselves — interested, they also came up with a rotating set of celebrations. Recently, they prepared “tastes” of India, Mexico and — for Chinese New Year — Asia. Coming up are Greek dishes for the Ides of March and “tastes” of Ireland, Thailand and Italy.

“It keeps us excited,” Stillwell-Current said.

As for the most popular, it would come down to “Thai versus Indian,” Current said.

Outside circumstances forced other changes. When produce sales slumped after the Kroger Marketplace opened a few years ago, they replaced the electricity-hog cooler with more customer seating.

The village has changed, too. Current Cuisine was once one of only three businesses open downtown on Sundays, along with Weaver’s grocery store and the Emporium. And the rise in tourism in recent years here has brought more customers, and revenue, to the shop.

But the couple said they’ve focused on meeting the needs of villagers first.

“I’d like to say we’ve catered to the villagers,” Current said.

That dedication has meant few days off, and opening during “blizzards, downpours and power outages,” Current said.

Keeping a four-wheel drive vehicle has been necessary to get into town in any weather from their property in the country, Stillwell-Current noted.

“There’s no calling in sick,” she said.

A part of the community

For one, Current Cuisine has supplied a significant number of local jobs, with many employees staying on for years. Currently, they employ 20 people in both businesses, although large events — like 400-person weddings — can swell temporary staff figures to include 30 servers.

They also regularly field requests for donations from local organizations and school programs, another reason they were selected for the Chamber award.

“Just about every week, you get asked to donate,” Stillwell-Current said.

At the same time, the local community strongly supports the business, as patrons with lots of ideas about what they’d like to see in the store.

The couple credits a few loyal customers with helping them at the start of their business. That includes those from what they called “the elder guard of Yellow Springs,” like the Colberts, the Trollanders, Asakawas, Viemiesters, von Mattiessens, Ashbackers, Scotts, Hoopers and Bents.

Eating nearby was one such customer, Jon Whitmore. When it gets close to noon, Whitmore wanders down to check out the day’s offerings.

“They can never quit,” he added.

Retirement is not yet on the horizon, but the couple is slowing down. Their son, Andrew, is now the head cook, although Steve still manages the kitchen and does a lot of cooking and baking. Meanwhile, Karyn does most of her work out of a small space behind Kismet that serves as the catering office.

As for the secret recipe behind his famous hummus, Current hesitated, then answered definitively.