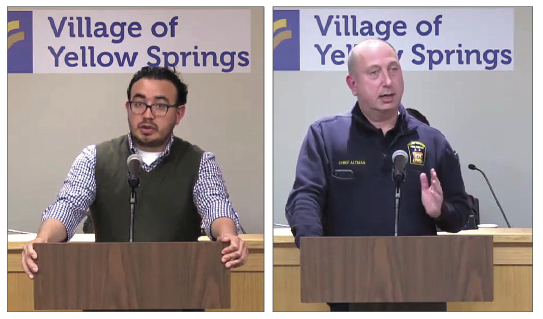 Village leaders struck a tone of concern and hopefulness in the face of the coronavirus outbreak as they updated the community on their responses to the crisis at a “virtual town hall” on Monday, March 16.

The town hall replaced the regularly-scheduled Council meeting, and was broadcast live on the local community access channel, Channel 5, and streamed online. In-person attendance was discouraged due to the state’s suggestion for “social distancing,” in which individuals stay six feet apart to prevent the spread of the virus.

Village Council canceled its agenda to “prioritize what is on everybody’s minds,” Council President Brian Housh said at the meeting’s start.

Noting that the Village is being “as proactive as we can be in an evolving situation,” Housh said the village is in “great shape” because local stakeholders are coming to the table.

Specifically, the Village is participating in a collaborative effort with the Yellow Springs Community Foundation to meet local needs in areas such as food security and local business support, according to Village Manager Josué Salmerón.

Among the most significant announcements was that the Village will no longer disconnect the utilities of those who fall behind in their payments. In addition, the Village will also not assess late fees on utility customers.

“We will not disconnect your water, your electricity, or any other service you rely on us for,” Salmerón assured villagers.

Salmerón added that the Village has developed contingency plans for each of its departments, with guarantees that local services will still be delivered with 50% or less of municipal staff on the job.

“We want to reassure you that we are doing all we can to continue essential services to Yellow Springs and Miami Township residents,” Salmerón said.

Housh appealed to villagers to stay calm, not overreact to the crisis, and be kind to one another.

“Recognize that there is a lot of anxiety, and be kind,” Housh said. “This is a rough time for everyone.”

In addition to officially canceling its agenda for the evening, Council voted unanimously to table the consideration of the extension of the Millworks site plan. An executive session for the purpose of discussion of the potential sale of Village-owned real estate preceded the meeting.

The Village will be holding virtual town halls every Monday, Wednesday and Friday at 7 p.m. Villagers may ask questions during the town halls via phone or social media.

Other leaders shared their efforts to safeguard their departments and their functions.

Village Public Works Director Johnnie Burns detailed how his staff have moved to a schedule in which they physically come to work every other day, while working from home the other days. That includes employees in the water and wastewater, electric and street departments.

In addition, meter readers will no longer enter homes to read meters, but will leave cards with information on how householders can read their own water meters, Burns explained.

“We are taking every precaution to keep our staff safe and continue on and let us all get through this,” Burns said of his efforts.

YS Police Chief Brian Carlson said it was “business as usual” for the police department, although officers are taking extra precautions to not expose others, or get exposed, to the virus through their interactions with the public. The department has a supply of “respirator masks” when attending medical calls, Carlson previously told the News.

Carlson also encouraged villagers to have patience with officers and dispatchers, who may ask more questions than usual, and to look out for the health and safety of one another.

“Come together, stay strong, check on your neighbors,” Carlson suggested. “We are a strong community and I believe that we will come through this.”

Miami Township Fire Chief Altman also said he was taking precautions to protect his staff. For example, the department implemented a “no visitors” policy at the station,  “to help keep things out or keep things in,” he said. He recommended that villagers who are sick with non-life threatening symptoms contact their primary care physician first, as the local EMS is hoping to “not take people with initial symptoms to the hospitals.”

Altman assured villagers, however, that the department was ready to respond to calls during the pandemic.

“Give us a call and we’ll come help you out, as always,” he said.

Mutual aid agreements are already in place for the local fire and police departments, the News has reported.

In a previous interview, Salmerón said that the Village is encouraging sick employees to stay home, and would be flexible on paid leave.

“We don’t want a situation where someone comes to work just to get a paycheck,” he said.

Lisa Abel, president of the Yellow Springs Community Foundation, shared how that group has assembled plans to help local citizens during what is a “weird” and “stressful” time for all.

“It’s really stressful when you don’t know the end point, when we’re going to get back to normal,” Abel said. “We’re doing what we can to reduce those stresses.”

Over the previous five days, the foundation assembled a team to address areas of food security and delivery, local economic support, financial assistance and childcare and youth services. It has also set up a way for villagers to donate time, and funds, to those in need as well as a way to ask for help. For information, email yscf@yscf.org or call 937-767-2655.

The Village is also involved in these efforts, Salmerón said, as they look to “go beyond essential services” to provide “supportive services” to the community. Other strategies are to reach out to local landlords about rent relief and identify ways to support local service workers, Housh added.

Also participating in the town hall was Sheryl Wynn of Greene County Public Health, who gave an update on the developing pandemic. There are no confirmed cases in Greene County, Wynn said, but if someone tests positive, the health department will trace all of their known contacts so they can self-isolate. She noted that this coronavirus is highly contagious.

“This particular virus is two to three times more contagious than the seasonal flu,” she said.

Wynn said the health department’s goal with “contact tracing” is to decrease the potential for those who are at the greatest risk for serious complications, including the elderly, those with diabetes or heart disease and those who are immune suppressed, such as those receiving cancer treatment.

“This is particularly dangerous for those folks,” she said.

Wynn explained that the county has the potential to create “mass clinics” and plans to dispense medication at the county fairgrounds if necessary. The county has declared a state of emergency and approved a quarantine plan if mandatory quarantines become necessary, she added. That would give area law enforcement the ability to disperse large gatherings, among other powers. Currently, the federal recommendation is for gatherings of no more than 10 people.

Wynn announced that there is now a drive-up testing option at the UD Arena parking lot, 1801 Edwin C. Moses Blvd. in Dayton. Specimens will be collected at the site from 10 a.m. to 6 p.m. daily. However, those seeking testing must have a note from their primary care physician.

Wynn also suggested that if people need emergency care, they contact the hospital before arriving so that precautions can be made. “Any mask is better than no mask” for those who are already sick, she said. While young people who develop a mild case should get rest and stay hydrated, those at risk of complications should keep an eye out for warning signs such as difficulty breathing, she continued.

“Be mindful of stress in your upper respiratory system,” Wynn concluded.