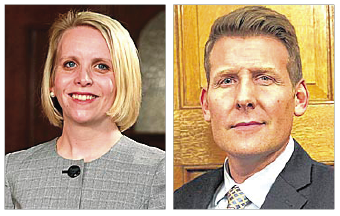 Alice DeWine and David Hayes are running against each other in the Republican primary for Greene County Prosecutor. The winner of the primary will win the seat, as no Democrat is running. (Submitted photos)

That’s why she’s running in the Republican primary for the office’s top job, a position her father, Ohio Gov. Mike DeWine, a Yellow Springs native, held in the late 1970s.

Educating youth about the dangers of drug use, prioritizing cases involving children and taking a stronger stance against drug trafficking are some of the ways DeWine wants to improve the office.

DeWine, 37, has long ties to Yellow Springs, and recently lived in the village for seven years. She worked at the Greene County Prosecutor’s Office for 11 years before leaving for a similar job in Clark County last year.

“I left because I thought the [Greene County Prosecutor’s] Office could be doing more, and I realized that I couldn’t make the changes with the current leadership,” she said in an interview last week.

Running for the same open seat is Republican David Hayes, an assistant prosecutor at the office as well as its chief trial counsel.

Hayes, 45, jumped into the race to challenge DeWine’s candidacy, saying the race “is not a coronation.”

“I’m the most experienced and I have the leadership and management experience my opponent lacks,” said Hayes, who has worked in the Greene County Prosecutor’s Office since 2004 and is retired from 24 years in the Air Force Reserve.

Hayes’ vision is largely to continue the work of current Prosecutor Stephen Haller, while focusing on training prosecutors to better handle certain types of cases, such as domestic violence, sexual assault and those involving children. Those are traditionally the most challenging for prosecutors, he said.

“I want to make sure we have aggressive, well-trained prosecutors,” Hayes said.

DeWine and Hayes are running for the seat held by Haller since 2006. And with no Democrat challenging for the office, the winner of the primary will win the seat.

The prosecutor oversees a budget of around $2 million and a staff of 14 attorneys to represent the State of Ohio in all felony cases and juvenile crimes in the county and cases involving county agencies.

In recent weeks, the race between the two has heated up. Hayes has been critical of the influx of outside money from a Political Action Committee, or PAC, promoting DeWine. That group, Protecting Ohio Action Fund, is around $100,000 in debt, and has blanketed the county with pro-DeWine mailers. Meanwhile, Hayes’ campaign, which has raised around $40,000, is more grassroots, he said.

“Our politics is about money and name recognition. But this [race] is about who is the best equipped and most qualified,” Hayes said.

DeWine, meanwhile, has been emphasizing her disappointment with the way the prosecutor’s office has been run. She said she can’t speak to the PAC and she doesn’t know who is behind it. Legally, her campaign cannot collaborate with the PAC, she added.

“I’m just staying focused on my message and what I can control,” DeWine said.

Regarding her platform, DeWine would like the prosecutor’s office to work more closely with the juvenile court. She believes there has been “a disconnect” between the goals of the two offices in recent years.

“They are handling the [juvenile] cases the way they’ve always handled them,” DeWine said.

If elected, DeWine said she would balance empathy for those who are addicted to drugs with strong enforcement of drug laws.

“We have to make sure the people who are drug trafficking are prosecuted and put away,” she said.

DeWine also wants the court system to partner more closely with local organizations involved in addiction recovery, such as churches and hospitals.

Hayes elaborated a similar approach to drug law enforcement, suggesting the office “go after drug traffickers” but “be compassionate with addicts.”

“The criminal justice system is not designed to deal with addiction,” Hayes said. “We can house people and treat people but we have to be open to different approaches.”

Hayes said he would take his first two months to speak with every office and law enforcement department with which the prosecutor’s office works to find out “what we do well and what we don’t.”

“We have to be responsive to our clients,” Hayes said.

Hayes added that he will focus on fiscal responsibility and continue to run an office that prioritizes transparency.

“The obligation of any government agency, especially one in such a powerful position, is to make sure the public understands why decisions are made,” he said.

Both candidates support the establishment of a drug court at Greene County Common Pleas Court, and see the need to replace the county’s aging jail.

On the specific proposal for a larger, 500-bed jail, Hayes said he is not concerned that the courts will fill it. DeWine said the issue is up to the voters.

DeWine said she feels bail reform is necessary, but is “not an issue here in Greene County.”

“At least in the court I practice in, the Common Pleas, I think the judges do set reasonable bond,” DeWine said.

Hayes said he is “in favor of anything that frees up jail space” but is worried too much bail reform might “take away the discretion” of local judges.

“I think our judges do what is best on a case by case basis,” he said.

DeWine currently lives in Cedarville Township with her husband and four children. Before that, she lived in town at the corner of Limestone and Phillips streets.

DeWine grew up in Cedarville and Washington, D.C. She spent summers in the village at the farm of her grandparents, Dick and Jean DeWine, where she recalls picking raspberries, mowing the lawn and painting the fence.

“That’s where I learned the value of hard work,” she said.

Hayes grew up in the Dayton area, retiring from the Air Force Reserve a few years ago at the rank of Senior Master Sergeant in the 445th maintenance squadron.

Hayes lives in Beavercreek with his wife and two daughters. The family enjoys visiting Yellow Springs on weekends and Street Fairs.

Both candidates are running in their first election.