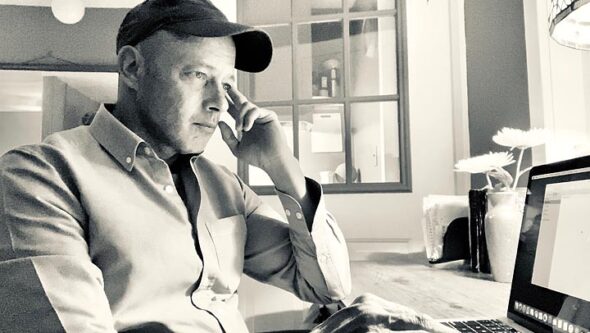 Yellow Springs-based playwright and actor Robb Willoughby will debut his play “Look into My Eyes” by way of virtual broadcast Saturday, May 16, through Wednesday, May 20. Tickets are $10, and all proceeds will be donated to the Dayton Foodbank. (Submitted photo)

Even amid a global pandemic, the show must go on. Or at least, it does for Yellow Springs-based playwright and actor Robb Willoughby. Rather than adorning any local stage, Willoughby’s recently penned play, “Look into My Eyes,” a story of intrigue, scandal and telepathy, will soon be available for audiences to enjoy from the comfort of their homes.

Produced and “staged” by Dayton’s own Human Race Theatre Company, Willoughby’s play will be available to stream from Saturday, May 16, through Wednesday, May 20. Tickets are $10 and all proceeds from the virtual performance will be donated to the Dayton Foodbank’s COVID-19 relief efforts.

Unlike a traditional live performance, the premiere of “Look into My Eyes” will look something like this: the play will be pre-recorded and available for a one-time viewing during the available five days. The cast of seven professional Dayton-local actors will have been pre-recorded from each actor’s home. By the play’s debut, their recitations will have been edited and spliced together. Instead of appearing like any run-of-the-mill conference call or the opening credits to the “Brady Bunch,” they will become one cohesive virtual performance — albeit an unorthodox, and perhaps more intimate, one.

“We were forced to adapt, and we did,” Willoughby said.

He added, “Look into My Eyes” was initially slated for the Human Race Theatre Company’s “Monday Night Playreading Series,” an ongoing opportunity for playwrights to hear their scripts read aloud by some of the local talent. But, when Ohio’s stay-at-home order was issued mid-March, the theater company’s plans for the play shifted.

“I thought for sure that the whole thing would just be indefinitely postponed,” Willoughby said. “But, to [Moore’s] credit, he has been determined to see this through — to keep ‘The Race’ as an active and vital part of the community. His tenacity is what has led us to this ‘virtual’ reading and fundraiser.”

Getting the play off the ground and polishing it for its virtual debut has been anything but easy, Willoughby said. Every rehearsal had to be done over Zoom, the video conferencing platform, and all of the post-production was done remotely — all of which was challenging and unusual for everyone involved, Willoughby said.

Perhaps most difficult of all, Willoughby seemed to indicate, was adapting the tone of the play to fit the constraints of a computer screen.

“Comedy is difficult at best,” he said. “Doubly so when your fellow actors are not even in the same room. But, our director [Saul Caplan] was good at gauging pauses without ever creating dead air. No easy feat.”

“Look into My Eyes” features two psychic siblings; Billie, who can see into people’s futures, and her brother, Lonnie, who can read minds. When the siblings encounter a mysterious and tempestuous fortune teller, they intuitively know something’s amiss, that this tarot card reader isn’t all she’s cracked up to be. So, Billie and Lonnie must work together and combine their powers to expose their fraudulent foe.

Suffice it to say, dark hilarity ensues — as is the case for most of Willoughby’s plays.

“I like plays that force the audience to do more than just observe — stories that ask the audience to be an active participant, to put the pieces of the puzzle together for themselves,” Willoughby said.

Willoughby has been active as a playwright and actor for years. Locally, he has staged and starred in a number of plays with the Yellow Springs Theatre Company. In Fall 2018, he wrote “W3 — Three Humorous Tales of Horror,” a set of three plays produced and performed by the company. Willoughby has also played roles in the comedy/horror film “Society” (1981), the dramatic short film “The Disco Years” (1991) and worked as a live-action reference in Disney’s animated blockbuster “Aladdin” (1992).

“Look into My Eyes”  will begin streaming on Saturday, May 16, at 8 p.m., ending on Wednesday, May 20, at 8 p.m., and can be viewed one time only. Tickets are available at DaytonLive by calling 937-228-3630, or can be purchased at the Human Race Theatre Company’s website at http://www.humanracetheatre.org. Tickets are $10, with all proceeds going to the Dayton Foodbank.

The cast includes Human Race Resident Artists Caitlin Larsen and Scott Stoney, Barbara Dirr, Libby Holley Scancarello, Jeff Sams, Lauren Kampman and Jeremy Todd Farley. “Look into My Eyes” was written by Robb Willoughby and directed by Saul Caplan. The program is made possible thanks to the support of Pat and David Diven, Scott Stoney and Kevin Moore, and the Miriam Rosenthal Foundation for the Arts.