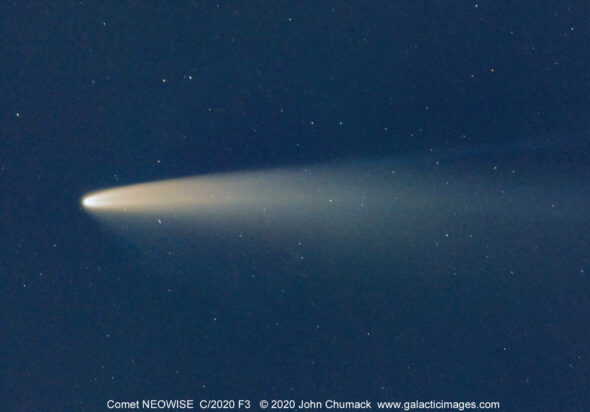 University of Dayton researcher and astrophotographer John Chumack recently posted an extreme close up photo of Comet NEOWISE, taken from an open space in Enon on July 10, just before sunrise. (Image used by permission, ©2020, Galactic Images.)

It isn’t every day that Earth is visited by cosmic travelers. But if you haven’t already, you can catch a glimpse of one as it is being revealed by our sun.

Comet NEOWISE, as it has been named, will show off its 10 million-mile tail in the northwestern skies, about an hour after dusk, for the next few weeks.

NEOWISE will appear to pass through the constellation of Ursa Major, below the Big Dipper, and will be visible through mid-August, after which it will return to the frigid realm of the outer solar system.

The comet was newly discovered March 27, 2020, by astronomers using the NEOWISE space telescope, launched in December 2009 as an exoplanet hunter and recently repurposed to observe near-earth objects, like comets. 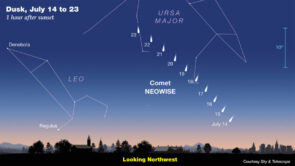 Position of comet NEOWISE over the next few days; click to enlarge. (Courtesy of Sky & Telescope)

The comet’s closest approach to Earth will occur on July 23, and its pass by our sun indicates an orbital period from anywhere between 4,500 to 6,800 years, meaning it won’t return again for several millennia.

So find a dark, unobstructed view of the northwestern sky, bring binoculars or a telescope, and enjoy this truly once-in-a-lifetime experience.

University of Dayton researcher and astrophotographer John Chumack recently posted an extreme close up photo of Comet NEOWISE (above), taken from an open space in Enon. Below, he is shown posing with the celestial visitor. You can see more of Chumack’s work at http://www.galacticimages.com. 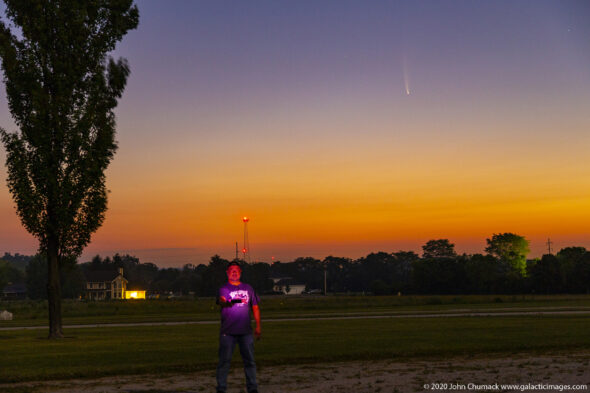 UD researcher and astrophotographer John Chumack poses with his latest subject, comet NEOWISE, on July 10, 2020, just before dawn, in Enon.

(This post made use of information provided by Wikipedia, NASA/JPL and Sky & Telescope online.