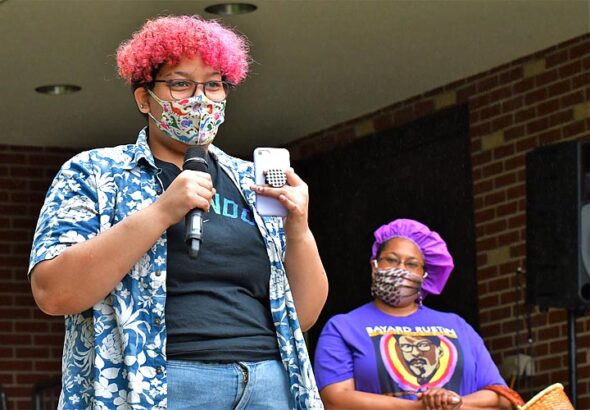 "Camryn “Milo” Strolger, a junior at Yellow Springs High School, addressed the crowd gathered in the rain outside Mills Lawn Elementary School on Saturday, June 27, in what has become a weekly anti-racist rally led, in part, by local youth. Audrey Smith, at right, looked on as Strogler spoke." (Photo by Kathleen Galarza)

Other articles in this series

In the weeks of local, national and international protests and marches following the May 25 Minneapolis police killing of George Floyd, an unarmed Black man, local young people have emerged not only to add their voices to the growing chorus calling for social change in valuing and protecting the lives of Black people, but more significantly, they’ve stepped out in front as leaders.

“The level of energy and engagement by young people is different than we’ve seen in recent times,” John Gudgel, president of The 365 Project, which promotes racial equity, said in a recent video interview.

Floyd’s death under a white police officer’s knee — held to Floyd’s neck for nearly nine minutes with no assistance from other officers on the scene — was a cultural flashpoint amidst a continuing series of racially charged police and civilian killings of Black people across the country.

For many local teens and young adults in their early 20s, the accumulating deaths feel personal. Young people of color see themselves and their families being treated differently, and they feel under threat within the national culture; while their young white allies see disparities in privilege and safety that negatively affect the lives of their Black peers.

So, after two initial grass-roots organized protest in downtown Yellow Springs at the end of May and beginning of June, several members of the local Young People of Color group, formed several years ago under the auspices of The 365 Project, contacted Gudgel.

“We want to do something,” Gudgel said they told him. That call led to a youth march from Gaunt Park to the center of town the following Saturday. That same week, the young people invited speakers to address a rally from the steps of the library and then led another march from that location. The following Saturday saw the young people rally in front of the elementary school, with more speakers and a subsequent march through a different area of town.

Floyd’s killing “lit a fire under my hiney,” Angela Allen, one of the youth organizers, said in a recent video interview. Systemic change is overdue, she said. “We didn’t have to get to these levels of fatalities and brutalities to do something.”

Allen, who grew up in the village and graduated from Yellow Springs High School, recently returned to the area after earning a degree from Miami University in criminal justice. She said she is taking action in Yellow Springs because while the town hasn’t experienced the same kind of deadly consequences from racism as other communities, safety here isn’t ensured.

“We’ve come so far, and there’s a whole lot more to do,” Allen said. “We don’t want [racially based violence] to get here. We want to take precautions and set up a blueprint for other cities” for effective policing and governance.

Another organizer, Nya Brevik, who just graduated from YSHS, said she stepped up to be part of the current movement in response to the mounting examples of misbehavior among law enforcement agencies across the country.

“There are major problems with police brutality,” Brevik said, adding that she feels there is an “inherent threat in being Black in America today.”

Brevik believes widespread change is needed to address that threat.

“I want to see change in every aspect of life,” she said. Specifically, “I want to see more tolerance. There’s still a lot of work that needs to be done.”

Julian Roberts, a YSHS graduate currently attending The Ohio State University, said that many white people in Yellow Springs, most of whom are sympathetic to the ideal of racial equity, are still oblivious to the disparities within the community.

That’s why the youth marches have taken a variety of routes through different areas of town, she said, adding that she supports that approach.

“I thought it was important to bring our message to neighborhoods and people there,” Roberts said.

Growing up Black in Yellow Springs

Allen is passionate about changing the policing culture that leads to the brutalization and killing of Black people, and wants to make certain that Yellow Springs has systems in place that ensure the safety of people of color when encountering law enforcement. At the same time, she said she is grateful to have grown up having positive interactions with local officers, though she didn’t feel she knew them well.

She said she hasn’t hesitated to call on YSPD when in need, but she recognizes that many Black people don’t feel the same. Whether through experiences here or elsewhere, there is widespread lack of trust among people of color that they will be treated by police with dignity, respect and care for their well-being.

Brevik and Roberts both said they can’t imagine calling police except in the most dire circumstances.

Allen added that her comfort level with local police doesn’t extend outside the community, however. She recounted taking a road trip with a cousin to visit a relative in Texas several years ago, and being pulled over by a law enforcement officer on their way home. She was terrified.

“I thought we were going to die,” she said.

The reason given for the stop was an inoperative license plate light. The officer asked her cousin, who was driving, to get out of the car to show her the problem. Allen said she held her breath in fear. But then the officer sent them on their way with no issue. In retrospect, Allen thought that her cousin, who was tired, may have swerved on the road, and that the officer’s intention in asking her to get out of the car was to make certain she was OK to drive. He turned out to be a good guy, she said. But she didn’t know that when he pulled them over, and she couldn’t count on that.

The three young women agreed that their main experiences of racism or racial bias growing up in Yellow Springs took the form of microaggressions — negative prejudicial slights and insults that can be either intentional or unwitting.

Microaggressions often take the form of limited expectations that are based on stereotypes or ignorance, Allen noted.

Compliments that sound more like surprise concerning academic success and achievement, feel dismissive and belittling, she said. She has also encountered the assumption that someone outside herself or her family unit must have had a hand in her accomplishments. She was also met with an expectation that she would be interested in playing sports, as though that was a given for a Black student.

Bevik said she bristles when hearing phrases like, “You’re so articulate.” Why wouldn’t she be?

Roberts, who was academically oriented, said she was met with similar assumptions, which have continued in college. She said there are assumptions that she hasn’t succeeded on her own merits, that she is filling a “quota” as a Black woman.

Roberts said such thinking erodes one’s self-confidence and sense of belonging, which is an added weight and detriment when looking to make one’s place in the world. The “Imposter Syndrome,” the feeling of not being good enough to belong in a particular environment, regardless of training and ability, is especially strong among Black women, Roberts said. First Lady Michelle Obama wrote in her memoir “Becoming” about her own experience of the syndrome.

White ally Julia Hoff, a 2020 YSHS graduate who has also been involved in organizing the youth rallies and marches, said she sees ways that her white peers are oblivious to their privilege, taking for granted their sense of belonging as well as their feelings of entitlement to being treated well by police and others in authority.

The local youth effort is primarily female-driven, and organizers are not sure why. Gudgel noted that The 365 Project plans to work on learning more about the thoughts and needs of local young Black males at this moment, which he said feels like a turning point.

“We want to focus on supporting our youth in taking the lead,” Gudgel said.

While not part of organizing the ongoing rallies and marches in town, Antioch student Chris Chavers, class of `21, has been active within the college community in bringing about changes there.

Co-president of ComCil, and president of the Black Student Union, which he founded two years ago, Chavers this year proposed that Antioch adopt June 19 as an official paid holiday in recognition of Juneteenth, which is celebrated as the day the last enslaved people in Texas learned of their freedom, months after the end of the Civil War and two years after the Emancipation Proclamation. The college agreed, and made it policy for each year to come.

“In addition to the COVID pandemic, there is also a Black pandemic that has been in this country since 1619,” Chavers said in a phone interview this week. “The very least we can do is to honor some days in the history of Black people.”

Pursuing a self-designed major in pre-law and community engagement, Chavers said he loves Yellow Springs, which he feels is inextricably interlinked with Antioch. But as a young Black man in town, he has encountered suspicious store clerks watching him while he shopped.

“I would raise my children in Yellow Springs,” Chavers said, but that doesn’t mean he doesn’t recognize there is systemic racism in the village that needs to change.

He said that white people who are comfortable within social systems have a hard time seeing how others are left out.

“We need to have conversations about the disparities,” he said.

“Who’s on the councils? Who’s making the decisions?” The table needs to be more representative of diverse communities, he continued.

Chavers, like Angela Allen, feels that Yellow Springs is in a position to be a model for other communities in dismantling the trappings of systemic racism. But the village needs to do the work, and not just leave it “to the Black and brown people.”

“We can be leaders,” Chavers asserted.