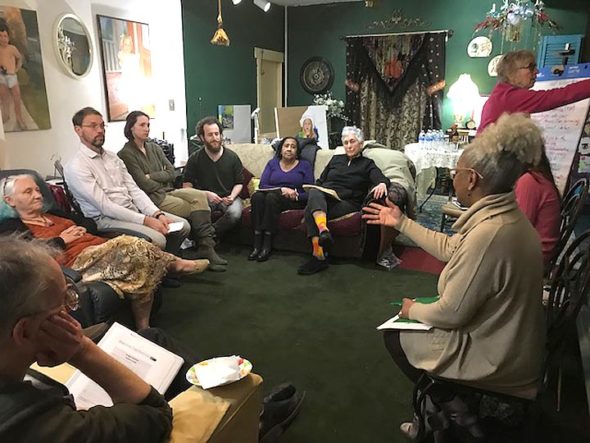 Facing Race: This is first in a series on the impacts of racism in Yellow Springs and local anti-racist efforts and activities.

Other articles in this series

Racism has a foothold in Yellow Springs, despite the village’s avowed inclusive values.

This reporter, who is white, is far from having talked to every person of color in town, but every Black person interviewed has experienced racism in Yellow Springs. Just a few instances include:

• A server at a downtown restaurant being told by a customer he wanted a different, white, waiter.

• A customer at a local shop being ignored by the clerk, who helped a white patron in line after him.

• Another Black customer, new to town, being treated with suspicion and ill-will at several local stores.

• An educator getting “the look” of suspicion and rejection from white people in a variety of public and professional settings.

• A Black visitor in a white family’s home told jokes about Black “cousins.”

• A villager hearing an acquaintance say that the Martin Luther King Day celebration would have been “more pleasant if all the Black people wouldn’t have been Hallelujahing.”

The instances are often subtle and covert, but they hurt and demean nonetheless, villager Carmen Lee said last week. And they add up.

The president of the local nonprofit H.U.M.A.N. (Help Us Make a Nation), which is dedicated to social equality, Lee said her perspective on racism in the village was formed as a small child in Loveland, Ohio, and later moving to Yellow Springs as a youth.

She experienced racism in both towns, but it took different forms.

“Loveland was considered Appalachia. It still is,” Lee said. “It had a lot of poor white people. And the white people who had money worked in skilled trades, like electricians or bricklayers, like my father. Here [in Yellow Springs] there are Ph.D.s and master’s degrees; it’s more academic.”

“I never experienced any maltreatment from these people,” Lee said.

In Yellow Springs, the doors of white people were opened with smiles and welcomes and expressions of inclusion, but once inside, Lee often felt hostility and racial bias directed toward her or Black people in general.

As an adult, she worked for several years at the Community Children’s Center, and of course ran into families of children when grocery shopping downtown. Invariably, while the children greeted her happily, white parents ignored her.

“They wouldn’t talk to me,” Lee said.

She said it happened so often she came to refer to it as “the Mammy Clause,” in that she was performing the anonymous “Mammy” role in the minds of the white parents.

Lee said that it has been suggested to her that the parental response, or nonresponse, was more about class than race, but she doesn’t agree.

Another difference between the social cultures of Loveland and Yellow Springs is the way people respond to family members or others who express noxious views.

In Loveland, the person would be confronted and questioned: “Why do you say that?”

“In Yellow Springs, [I hear] ‘I’m not talking to my uncle, he’s racist.’ But that’s not going to solve anything.”

It’s important to have a dialogue in order to bring about change, Lee said.

“We have to start having the uncomfortable conversations,” she said, adding that she knows it’s hard. “Especially when it’s family. But we have to. The only way things are going to get better is we have to talk about it.”

She sees this moment in time, when more white people are protesting systemic racism and violence against people of color, as a possible turning point.

“I hate the situation that we’re in, but I love the dialogue. I love the momentum. I love that people are having uncomfortable conversations.”

John Gudgel, president of The 365 Project, which promotes racial equity, agrees that something new is happening.

“The kind of enthusiasm and engagement by young people is different than we’ve seen,” Gudgel said last week.

And change is needed, he said.

“The fact is, we wake up every day and we know we’re Black, and that when we leave our homes, there are certain ways we have to be,” to feel accepted and safe in a white-dominated society, he said.

A retired principal at the middle/high school and currently a counselor at Mills Lawn Elementary School, Gudgel said that professional standing in the community doesn’t insulate a person of color from racial bias.

“We still encounter it,” he said. Even as a principal, he would walk into a room full of white educators and be met by an atmosphere that questioned his right to be there.

Kevin McGruder, an associate professor of history at Antioch College, where he is also the vice president of academic affairs, said he encountered racially based hostility when he moved to town eight years ago.

He noted that racism doesn’t have to be overt to be harmful. In Yellow Springs, you may “not be called the n-word regularly,” but there are other ways to feel rejected, he said.

It’s frustrating, too, when white people devalue, question or diminish Black people’s descriptions of their personal experiences, McGruder said. He cited an example of a white acquaintance trying to explain away a negative shop experience he’d had. He had to be firm about the validity of his encounter.

McGruder cited a recent book that describes “racial diminishment syndrome,” and assesses the toll “these little slights do to us.”

David Perry, whose family goes back multiple generations in Yellow Springs, said that subtle forms of racism can affect how people feel about where they live, and how well a community attracts diverse populations.

“There’s always been racism here, and there still is,” he said last week, speaking of his experiences.

He also believes that the current presidential administration has emboldened more racist attitudes.

“You don’t know what white person to trust,” he said. “In our case, you have to be on the defense, because you don’t know.”

McGruder, who has family from Alabama, said that Northern racism can be harder to navigate.

“In the north, they’ll smile in your face,” he said, echoing Carmen Lee’s description of the difference between Appalachian Loveland and academic Yellow Springs.

“There are people who act pleasant, but in an underhanded way do evil things,” McGruder said. Among those evils is ascribing good intentions to those who support terrorist organizations like the Ku Klux Klan, he added.

Speaking as a white ally and a founding member of The 365 Project, Joan Chappelle said that white people have a responsibility to end racism.

“We turn to them to help us with issues of race,” she said.

But we shouldn’t expect them “to show the way and do the work helping [white people] get woke,” she said. “White people have enough resources on how to be a white ally and how to do their own inner work.”

Lee agreed that helping white people undo what they created is a heavy load.

“It’s not the responsibility of people of color to show certain white people how to behave. It’s just not,” Lee said. “How would you feel if I came in and wrecked your house, then asked you to help clean it up?”

A piece of that personal work involves looking at personal practices, Lee said.

“Patronize Black businesses. If you don’t have a Black lawyer, or a Black accountant, ask yourself why not.”

The good news for Gudgel is that more white people are expressing interest in being allies.

“That’s one of the key differences from 50 years ago,” he said. “When you see white allies in Greenville, Ohio; Celina, Ohio; Bethel Township; Bellbrook, Oakwood — I continue to be amazed. Missoula, Montana, Ogden, Utah. I’m just flabbergasted. Some of these areas that had Black Lives Matter rallies were once ‘sundown’ towns.”

Perry believes that, despite the political climate, progress is being made, and that gives him hope.

Chappelle said she sees progress, too.

“Locally, white people are more interested in doing some introspection, or some internal work that says, ‘Gee, I might be a part of this.’”

Lee said she accepts that mistakes will be made and wants to foster an atmosphere of open communication.

“We start picking apart people’s use of language, their tone, then we can’t get beyond that to have a dialogue,” she said. For change to happen, “we have to start having the uncomfortable conversations,” she repeated.