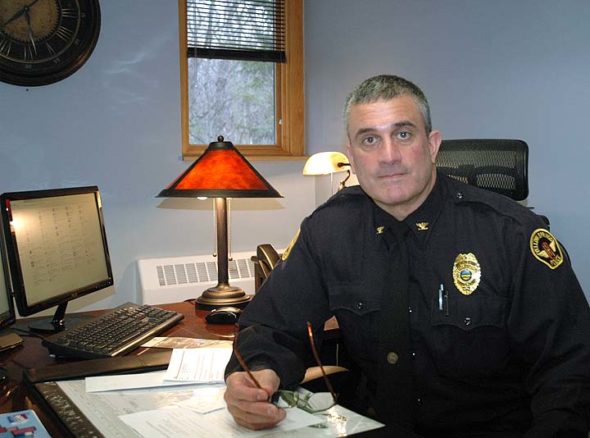 Yellow Springs Police Chief Brian Carlson was cleared of wrongdoing by an outside investigator in June after a formal complaint was lodged against him by a village resident in May.

The complainant, Zo Van Eaton-Meister, contended that the police chief verbally accosted her during an incident that occurred downtown on May 22.

In a May 26 email to Village Manager Josué Salmerón lodging a formal complaint, Van Eaton-Meister wrote that Carlson impeded her ability to enter Tom’s Market and spoke to her in a tone that she found “blatantly condescending” and “insincere.”

“The smug interference with my ability to run a simple errand downtown was in the poorest of taste,” she wrote in the complaint. She added that she attempted to “disengage multiple times” but was “unable to escape.”

In response to the complaint, Salmerón requested an outside review from Greene County Sheriff Gene Fischer, who assigned Captain Brad Balonier to investigate.

On June 18, Balonier concluded in his final report to Salmerón that Van Eaton-Meister’s complaint was “unfounded” and that Carlson, who “simply said hello” to her, did not violate any YSPD policies.

The Village will not be pursuing any discipline against Carlson, Salmerón confirmed last month. And no charges stemming from the incident were filed against Van Eaton-Meister.

However, Carlson sought and was granted a temporary restraining order against Van Eaton-Meister on May 28. Van Eaton-Meister is planning to contest the order at a hearing scheduled for August 31 at the Greene County Court of Common Pleas.

Van Eaton-Meister, who is the wife of longtime YSPD officer David Meister, previously lodged a formal complaint against Carlson in 2013, when Carlson was a police officer. In that case, the complaint was reviewed by the Greene County Prosecutor’s Office and dismissed by then-YSPD Chief Anthony Pettiford.

Officer Meister has been the subject of three highly visible public disciplinary investigations into his professional actions in recent years. During those cases, numerous citizens have spoken up in support of the popular officer, the only full-time officer who lives in Yellow Springs.

The News has chosen to release the name of the complainant because she is related to an officer and has made her grievances with the local police department public.

Carlson started as a part-time YSPD officer in 2010 and has been the Yellow Springs police chief since 2017. He was most recently renewed as police chief in June, entering into a three-year contract with the Village. According to a review of his personnel file, the Village has received no other formal citizen complaints against Carlson during his tenure, while he has been disciplined twice for inaccuracies in filling out accident reports.

Summary of the incident

According to Balonier’s summary of the incident, at 1:29 p.m. on Friday, May 22, Carlson was hanging signs about face masks on lamp posts downtown with YSPD Officer Doug Andrus when Van Eaton-Meister parked nearby with the intention of shopping at Tom’s Market.

According to Van Eaton-Meister’s email complaint, while walking from her car to Tom’s with a “toddler on her hip” she greeted Officer Andrus. Carlson then “instantly began taunting” her, she wrote.

“From the outset he was blatantly condescending in his tone so I requested for him not to address me altogether, “ Van Eaton-Meister wrote.

Although she told Carlson multiple times to stop speaking to her, he continued, Van Eaton-Meister reported.

“Repeating myself, I requested that he not address me in any way, shape or form. To no avail.”

According to Balonier’s report, Carlson said hello and addressed Van Eaton-Meister by name, and she “took personal offense to this greeting.”

“Chief Carlson simply said hello. This type of interaction would be expected in public servants, especially in a small village like Yellow Springs,” Balonier wrote.

According to a witness statement from the Village employee who was downtown, Carlson responded to alleged comments from Van Eaton-Meister that included “you’re the worst kind of creep,” and “you’re a f*****g freak,” by saying, “I’m sorry you feel that way,” and “I hope you have a nice day. Have a nice day, Ma’am.”

When Carlson and Andrus then continued down the street hanging flyers, Van Eaton-Meister retrieved her cell phone and began taking pictures “from a close proximity,” according to Balonier’s report. In her complaint, Van Eaton-Meister wrote she took photos of Carlson “for evidence.”

Seven minutes later, YSPD Officer Dennis Nipper had pulled up next to Carlson on Short Street and was speaking to Carlson when Van Eaton-Meister drove by and nearly struck Carlson with her vehicle while yelling expletives at him, according to Nipper’s account in an incident report. According to Van Eaton-Meister, Carlson was blocking the road.

During the incidents, Carlson instructed both officers to not take law enforcement action against Van Eaton-Meister, but to officially document the incidents, Balonier noted in his report.

In the end, Balonier concluded that although Van Eaton-Meister reported that she was “‘accosted’ and ‘her ability to enter the store was impeded,’” the evidence does not support her claim.

“In fact, Zo Van Eaton-Meister made a decision to stop and engage Chief Carlson,” Balonier wrote. “According to all eye witnesses, she was the aggressor.”

Balonier additionally found that Carlson’s actions were in line with the YSPD mission statement and core values, as he acted in a “demonstrably inclusive” manner toward Van Eaton-Meister.

“Regardless of the fact that she has personal and professional disdain towards him, Chief Carlson was mindful of his primary obligation to serve the community courteously,” Balonier wrote.

In reaching his conclusion that Carlson violated no policies, Balonier reviewed three witness statements written by villagers who were downtown when the incident occurred. He also reviewed the two incident reports filed by YSPD officers Andrus and Nipper and the YSPD policy manual, and interviewed Van Eaton-Meister, Carlson, Andrus and Nipper. No security camera footage from downtown businesses captured the incident and cruiser dash cam footage was not available as the cruiser was parked too far away, according to Balonier’s report.

Context for the investigation

Salmerón received Van Eaton-Meister’s formal complaint a few days after the incident, and based upon the advice of then-Village Solicitor Chris Conard, sought out a “third party investigator” to review it, he said in a recent interview. Salmerón contacted Greene County Sheriff Fischer, who assigned Balonier, a captain in the law enforcement division of the Greene County Sheriff’s Office. Balonier began his investigation on June 3.

Asked why a law enforcement agency was chosen for the outside review, Salmerón said the agency has the “investigative skill-set and expertise” needed to review such a case. The investigation was completed free of charge as a “professional courtesy,” Salmerón explained, as police departments routinely seek each other’s assistance to review internal complaints.

In response to a News question about why a citizen review committee, such as the pilot process used to investigate officer misconduct last fall, was not used to investigate this citizen complaint, Salmerón said that he chose a more formal, and outside, review due to the complexity of the complaint.

“The nature of the complaint was not a specific violation of a specific policy,” Salmerón said.

In addition, Salmerón decided upon an outside review due to the fact that Carlson had previously documented problematic encounters with Van Eaton-Meister. For instance, in an email to Village officials in January, Carlson wrote that he needed to take “proactive steps to protect” his family in the wake of two incidences in which Van Eaton-Meister came to his wife’s workplace and began “ranting” about his family.

Nearly a week after the downtown incident and a few days after Van Eaton-Meister’s complaint, Carlson petitioned a judge at the Greene County Court of Common Pleas for a civil protection order against Van Eaton-Meister, which was granted on a temporary basis on May 28. The order, which also  covers Carlson’s wife and teenage daughter, states that Van Eaton-Meister is permitted to call the local police department for help or to report a crime.

In Van Eaton-Meister’s 2013 complaint against Carlson, she argued that Carlson should have arrested and charged a man she claimed chased her on the bike path north of town with the intention of harming her. Although then-Acting Village Manager Kent Bristol found the complaint against Carlson’s actions had some merit, an outside review by Greene County first assistant prosecuting attorney Suzanne Schmidt found that Carlson, the officer who responded to Van Eaton-Meister’s 911 call, did not have probable cause to believe that a crime had been committed.