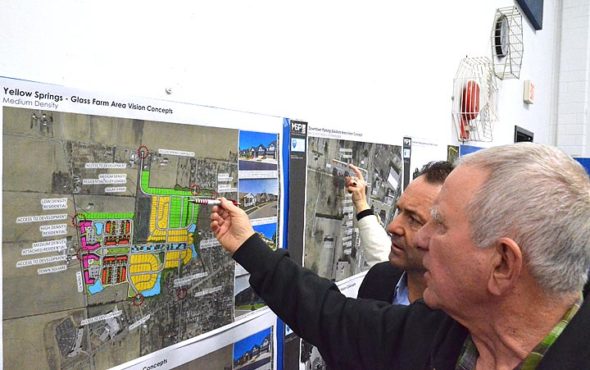 Earlier this year, on Jan. 23, the Village gathered public feedback from around 150 community members on land use concepts as part of the Comprehensive Land Use Plan process now underway. At right, Jose Castrejon, a landscape architect and project consultant, discussed a possible layout for housing on the Village-owned Glass Farm with a nearby property owner. (Photo by Megan Bachman)

Yellow Springs is poised to grow, within limits.

That’s according to the Village’s new Comprehensive Land Use Plan, which is nearing completion after a one-year process delayed somewhat by the COVID-19 pandemic. Dayton-based consultant Aaron Sorrell, of Community Planning Insights, presented a near-finished draft of the land use plan to Village Council on Monday, Sept. 21, after Planning Commission at its September meeting unanimously voted to send the plan to Council for final approval.

The plan has received 1,700 “impressions” or interactions from villagers, through community meetings, a project website and outdoor displays, according to Sorrell. Public feedback has emphasized the need for a broader economic base, more diversity of housing types and prices and municipal broadband, among other priorities.

Council members posed a few questions centered on the future land use map and downtown parking plans included in the document. Parking has been a controversial element of the plan, with several local residents weighing in at Planning Commission in opposition to potential future changes to parking on Elm Street. Other parking concepts reconfigure a Village lot on Corry Street, and suggest a way to add more parking spaces along Corry.

In another piece of feedback at the Sept. 21 meeting, Village Manager Josué Salmerón asked that Village-owned facilities located outside of Yellow Springs boundaries, such as Sutton Farm, where Village utility crews keep their equipment, be included in the final land use map as areas for possible future annexation.

“We need to protect assets outside of the village,” he said.

And Council member Laura Curliss made what she characterized as a “last plea” for the map to not designate a 25-acre portion of Glass Farm as high-density residential. The Village-owned land is intended as a possible future site for affordable housing, a longstanding and contentious project.

Council will hear a first reading of an ordinance to adopt the new plan at its Oct. 5 regular meeting. If adopted, as seems likely, the document would guide future development in Yellow Springs. While the plan isn’t a legal document, it provides a framework for future planning and zoning rulings, according to Sorrell.

“It’s the policy backbone behind annexation and zoning decisions,” he said at the recent Planning Commission meeting.

Zoning Administrator Denise Swinger affirmed that characterization at Planning Commission, and told Council that zoning staff take the existing comprehensive plan into account with each zoning or conditional use application.

“Staff looks at it from the get-go,” she said.

Zeroing in on the land use map, in some ways the heart of the new land use plan, Sorrell, at the recent Council and Planning Commission meetings, highlighted transitional land use districts to the south and west of Yellow Springs. According to Sorrell, these represent the main proposed changes to Village land use from the last comprehensive plan, which was created in 1998.

These transitional areas lie outside of current village boundaries, but inside what’s known as the “Urban Service Boundary,” or USB. Sorrell explained at Planning Commission that this boundary is an area just beyond Yellow Springs limits that could be served by Village utility extensions and a gravity-fed sewer. In practical terms, the USB is the outer limit to village development.

Immediately beyond the USB is a patchwork of properties under conservation easements held by Tecumseh Land Trust. A partial buffer against future development encroaching on Yellow Springs, the greenbelt, as it’s known, has been actively promoted and financially supported by the Village for many years. 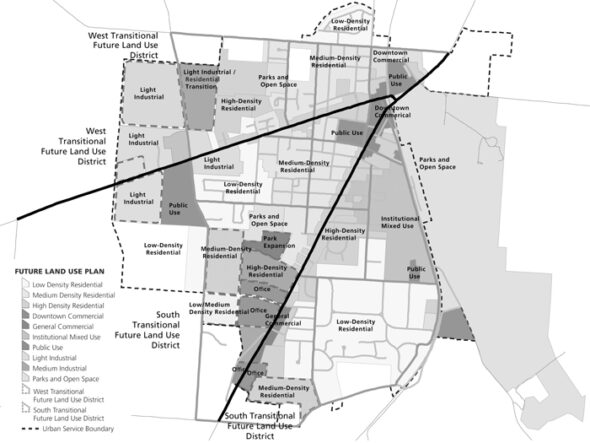 The future land use map for Yellow Springs shows existing land uses, as well as designated potential uses for areas outside of the village limits but within the Urban Service Boundary. Transitional areas to the west and south show where and how the village could grow. The map is part of the newly created Comprehensive Land Use Plan, now nearing completion. (YS News graphic with data from the Comprehensive Land Use Plan)

Sorrell stated that any future development of areas within the USB, and their potential annexation into the village, would not cause Yellow Springs to exceed the 5,000 population limit that defines a municipal unit as a village under Ohio law. Such a level of growth would be hard to achieve, and local residents have indicated through the comprehensive planning process that they prefer to remain a village, according to Sorrell.

“We’ve heard the village wants to stay a village,” he said. “There’s lots of room between where we are now and still being a village.”

That said, incrementally growing Yellow Springs’ population would have several benefits, in Sorrell’s view. Among them are spreading out high utility costs across a wider base of ratepayers and increasing enrollment in local schools.

Sorrell said he prepared the future land use map without knowledge of the plans for a residential development south of Spillan Road now being proposed by Miamisburg developer Oberer Homes. On the map, that area is described as a “South Transitional Future Land Use District,” and is designated for medium-density residential development. The property currently lies outside of Village boundaries in Miami Township, but Village leaders are exploring an annexation of the additional 30-plus acres into Yellow Springs.

The annexed property would come into the village with default zoning as low density residential, or R-A, according to Swinger during the Planning Commission meeting. That zoning could change through the Village zoning process.

Other transitional district properties on the south end of the village, including parcels to the west and east of Xenia Avenue, are designated for office use, a proposed expansion of Gaunt Park and residential areas zoned high, medium and low density.

According to Sorrell, the office designation responds to a need for more office space in the village, as well as a desire by villagers to not locate retail businesses away from the downtown area.

The transitional land use district to the west, located on either side of Dayton-Yellow Springs Road, is mostly designated for light industrial use, with a high-density residential area nearer to town. One parcel abuts the Yellow Springs High School/McKinney Middle School campus, while others adjoin the existing Village-owned CBE and a greenfield plot beyond that.

These properties lie outside Yellow Springs’ wellfield area and thus are suitable as industrial sites, according to Sorrell.

Overall, the plan is not a mandate to grow — nor is it a guarantee of future growth, Sorrell said in a follow-up interview about the plan’s purpose. And while it’s not a template for the future zoning map, it does point toward likely future shifts in that map.

“It’s where the zoning map is going at the time of the plan’s construction,” he said. “We can’t anticipate all future developments. Circumstances can change.”

In response to a News question, Council President Brian Housh said at the Sept. 21 Council meeting that the plan was not intended to take the place of a public process around specific planning decisions. He also called for an “ongoing mechanism” to allow public comments to the plan. Villager comments on the plan to-date are included in the meeting’s Council packet.

One practical purpose of the land use plan is to signal the community’s intention to prospective developers. In the case of the land use map’s transitional districts, those areas “are a road map of acceptable uses in the future” that most developers would be inclined to heed, Sorrell said.

More fundamentally, the plan articulates and clarifies the community’s land use values, which ultimately translate into its quality of life, according to Sorrell.

“The overarching umbrella is quality of life,” he said. “Yellow Springs residents are proud and committed to the village, and they want that high quality of life to be available to everybody.”

The Comprehensive Land Use Plan can be viewed online at sustainableyellowsprings.com. Local residents may still submit feedback on the plan to Council.