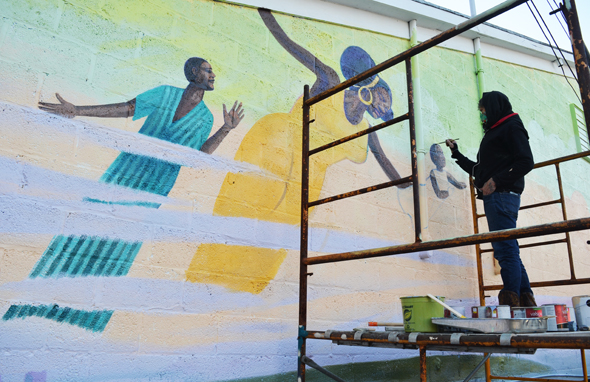 Local artist Pierre Nagley recently started painting a new mural honoring the life and works of famed local author Virginia Hamilton. The mural, located on the wall of the Yellow Springs News building, is being spearheaded by Help Us Make a Nation, or H.U.M.A.N., a recently revived local human rights organization founded here in the ’70s. (Photo by Megan Bachman)

A dream-like sky of violet, juniper and coral stretches across the wall. At the left of the frame,  figures wearing African patterns and jewelry float above a cityscape.

It’s just a start, but a new mural being painted on the side of the Yellow Springs News building by local artist Pierre Nagley is beginning to materialize.

When complete, the mural will pay homage to the village’s own Virginia Hamilton, a renowned author of 41 books in multiple genres and writer of what she termed “Liberation Literature.” Hamilton, a native of Yellow Springs and winner of a MacArthur Genius grant and Great Ohioan award, died in 2002.

Hamilton’s mural is being spearheaded by Help Us Make a Nation, or H.U.M.A.N., a local nonprofit active in Yellow Springs in the late ’70s and early ’80s and recently revived by a small group of residents, including Carmen Lee. The mission of the new H.U.M.A.N. is, for the most part, the same as when it was first founded 40 years ago, according to Lee.

“The mission was, and still is, that we seek to identify where human needs are going unmet and where basic rights are being violated,” Lee said.

“Through education and resource building, we seek to remedy those issues where they occur,” she added, by helping people, for example, navigate disparities in legal and medical systems caused by institutionalized racism.

Nagley’s design is inspired by the illustrations of Diane and Leo Dillon in Hamilton’s book “The People Could Fly,” a prize-winning collection of folktales that “highlight the power of the imagination to keep the spirit alive in the face of adversity,” according to Lee. The folktale draws from an old legend in which enslaved Africans literally fly away to freedom.

H.U.M.A.N. has so far raised $6,000 for the mural, including $5,000 from the Yellow Springs Community Foundation and $1,000 from the Village Arts & Culture Commission. Donations are now being accepted at the project’s GoFundMe page, with hopes of raising $1,000 more for future related projects. To donate, visit: bit.ly/2TNQWAA.

The Hamilton mural is part of The H.U.M.A.N. Mural Project, the nonprofit’s first effort since re-forming this spring. The group also raised money in conjunction with two murals painted this year elsewhere in Kieth’s Alley — one by Nagley commemorating George Floyd and another by Lindsay Burke depicting the uprising against police brutality and systemic racism.

H.U.M.A.N. initiated the mural project to showcase the village’s rich heritage and cultural diversity by celebrating notable Black residents in public spaces. For Lee, murals are an ideal way to share a message with the public.

“To me, a wall is a neutral space to get a message out,” she said. “Murals are very accessible.”

Nagley was the perfect fit for the Hamilton mural for several reasons. Although a prolific muralist with several prominent murals scattered throughout the village, Nagley has not always been appropriately compensated, a situation that Lee sought to remedy. Nagley’s talent and versatility were also factors, Lee added.

“Pierre’s life is dedicated to making art,” she said. “Every single stroke of his paintbrush is intentional.”

In addition, Nagley had already offered to the News to repaint its wall, which featured his very first local mural, painted in the late 1990s. The Blue Woman, as it was called, was inspired by a vivid dream. Nagley has since painted numerous murals around town, including the wall of faces at the Foundry Theatre, the “cave painting” in Kieth’s Alley and the Maxfield Parrish-inspired mural behind the Little Art Theatre.

After learning about the project, Nagley quickly got to work on Hamilton’s mural with hopes of finishing it by the end of the fall, although cold weather could delay its completion.

The final design leans heavily on the motifs from the lead story in “The People Could Fly: American Black Folktales,” a 1985 book by Hamilton that won numerous accolades, including the Coretta Scott King Award. The book’s release was a memorable moment in Lee’s childhood, and she remembers the book being “everywhere” in Yellow Springs.

“Most Black kids heard renditions of these stories, growing up, whether it was from an older relative or reading it in a book like Hamilton’s,” Lee said.

Lee was especially moved by “The People Could Fly” story, which tells the story of enslaved people flying to freedom. To her, the imagery of “flying away” is not intended to indicate enslaved people “dying and going to heaven” but escaping the horrors of slavery by their own volition, which, she muses, must have taken a combination of “courage and desperation.”

“They’re saying, ‘I’m going, and it doesn’t matter where, it’s going to be better than here,’” Lee said.

“It gives autonomy to people who didn’t have that,” she added. “We still don’t have it.”

Hamilton was a celebrated author living in Yellow Springs by the time “The People Could Fly” was released. She was born in the village in 1934 to a family who had lived in the area since her grandfather, Levi Perry, arrived on the Underground Railroad, according to her biography. After graduation, she received a full scholarship to Antioch College, later transferring to The Ohio State University, where she studied literature and creative writing.

Hamilton moved to New York City in 1958 to pursue her dream of being a writer and there met and married poet Arnold Adoff. The couple moved to the village in 1969 and built a home on the old Hamilton/Perry family farm on the west end of Dayton Street, where Adoff still resides today. Their son, Jamie Adoff, lives in the village and teaches at McKinney Middle School.

Lee’s family has similarly deep roots in the area. On her mother’s side, Godfrey Brown, an enslaved man and a cobbler, purchased himself and 15 other people out of bondage in March 1820, later buying 640 acres of land in Ohio, including in Greene County near Xenia.

Looking back is essential to many African traditions, Lee noted, represented in the term “Sankofa,” which translates to “go back and get it.” By learning more about the reality for enslaved Africans, who were stripped of their language, culture and religious traditions, Americans can better understand the present conditions for Black people, Lee explained. Ultimately, Black people, who have long been used as a tool for whites, are liberating themselves, an image the mural is meant to invoke, Lee said.

“It speaks to the eternal human spirit, after being stripped of everything that makes us human,” she said.

Lee’s vision resonates with the first incarnation of H.U.M.A.N., which was founded in 1978 by Antioch College professors Jim Dunn and Bill Chappelle following an Antioch conference on human rights, “Shame of America: The nation takes a look at human rights; we take a look at the nation.”

According to its founding documents, H.U.M.A.N.’s goal was to help create a society that “allows all people to live and grow as full human beings,” many of whom are not “liberated to do so because the present society, by design, is racist and sexist.”

“…We are all born with the right to be human,” Dunn wrote in a description of the organization. “The problem is, there are powerful forces within the society that continually block us from acting out that humanness.”

H.U.M.A.N. went on to host educational events and “floating coffee houses” around the village, to lead protests and to advocate for poor and Black people, locally and nationally. The group dissolved in 1984 after Dunn moved to New Orleans to form the People’s Institute for Survival and Beyond with lifelong activist and native New Orleanian Ronald Chisholm. That group’s “Undoing Racism” workshop, influenced in part by the work Chappelle and Dunn started with H.U.M.A.N., was one of the earliest models of antiracism training in the country.

Occasionally since then, former H.U.M.A.N. members have held reunions, but the group’s rebirth didn’t gain steam until 2018, when Lee co-organized “Gabby Day” with Brittany Griffith. That event honored a local beloved barbecue chef, Ellie “Gabby” Mason, who was involved in H.U.M.A.N. This April, Lee successfully received nonprofit status for the revived organization.

H.U.M.A.N. wants to challenge the way people think about race. Lee believes that “it’s possible to have discourse without discord.”

“In order for things to move forward and get better, we have to acknowledge there is a problem,” she said. “When doing this work, it’s important that we understand the baseline is racism.”

One Response to “Mural to honor Virginia Hamilton”