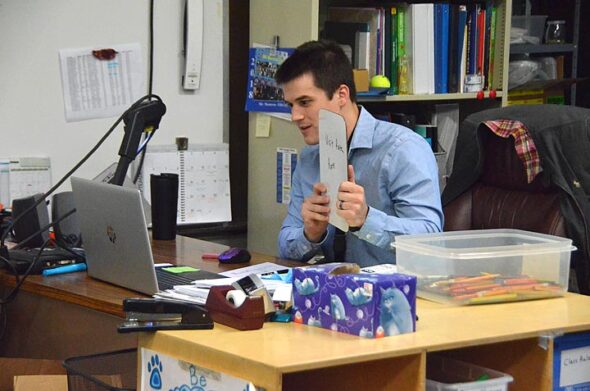 Earlier in the school year, sixth grade teacher Ryan Montross gave a math lesson in ratios with his students through an online video conferencing application. Students wrote answers to his queries on small white boards like the one he held here; and they shared their results at the same time. (Photo by Carol Simmons)

Yellow Springs students, whose instruction has been 100% online since the start of the 2020–21 school year, will return to the classroom — at least part time — no later than March 1.

District Superintendent Terri Holden announced the plan in a four-minute video distributed to families on Friday morning, Jan. 8, a day after Gov. Mike DeWine announced his intention to make the distribution of COVID-19 vaccinations to teachers and other school staff members contingent on districts agreeing to open schools by March 1, if they hadn’t already done so.

Holden confirmed to the News on Friday afternoon that she intended to sign the agreement on behalf of the district. She said the decision did not need school board approval, and her signature bound her “professionally and ethically” to honor the agreement. She also said she would be signing it this week.

The state in addition asked that along with the superintendent’s signature, districts provide the anticipated number of staff expected to be vaccinated. According to Holden, the decision to be vaccinated will be voluntary for all staff. She said the number she has given the state is 109, which she said is an estimate based on recent employment figures.

According to district records, the number of school employees currently totals 104, with 58 in certified teaching positions, but Holden said the total is fluid.

Representatives of the Yellow Springs Education Association, the local teachers union, did not reply to a request for comment on the district’s new plan before press time.

The school board in December had approved a transition plan for the district’s second semester, which begins next week, Tuesday, Jan. 19, for the introduction of a five-part rubric, based on the prevalence of COVID-19 cases, to determine the instructional approach for each week — whether to continue online, follow a part-time “hybrid” model or initiate a 100% in-person return.

According to Holden, the district will use the rubric as planned through February, and then employ its indicator points to decide between hybrid or full in-person instruction effective March 1. Her video address Friday began with an explanation of the individual indicators, a summary of which is posted on the district website. The rubric, also on the website, is to be updated each Thursday.

If indicators remain similar to last week, then online instruction will continue next week as well.

Families uncomfortable with returning to in-person classes by March 1 may sign up with the Greene County Online Collaborative for online instruction through a third-party provider. Originally offered as an alternative for students who did not want to participate in the district’s transition plan for the second semester, enrollment in the program previously had a Jan. 11 deadline. That deadline has been waived, however, with DeWine’s announcement, so families have longer to make a decision based on latest case numbers.

After watching the video, some local parents went on social media to express concerns about the state’s March 1 target date, especially if case numbers remain similar to current levels.

“I am resenting DeWine for giving us this ultimatum,” parent Dorothee Bouquet wrote on Facebook. “Of course I want teachers to have the vaccine, but going back full in person or even hybrid on March 1 is too dangerous when we (the families and our elderly) still don’t have access to the vaccine.”

Reached by phone for a followup this week, Bouquet noted that at the time of the governor’s announcement, the number of COVID cases in Greene County was seven times higher than the district’s set minimum — 100 per 100,000 people — to go hybrid.

“I don’t see numbers going down significantly in the next seven weeks to make it wise for students to go back in person,” she said. “I feel it’s reckless.”

She said she and her husband are going to wait until the third week of February to assess the numbers and make a decision about their first-grade daughter’s placement.

“If community spread is under control, then we’re definitely planning to send our child to in-person class,” she said.

But she’s not hopeful.

Nor is she hopeful that enough vaccines will have been distributed in the next month to cover all who qualify for the early rounds. She said she’s glad to see teachers among those approved for early access, but there aren’t yet enough doses for those who want it. And ultimately, receiving vaccinations shouldn’t be contingent on schools reopening, she repeated.

In his press conference Thursday, Jan. 7, DeWine said “most” schools in the state have already reopened in some form this academic year.

He also said that by March, students who had remained online will have been out of the classroom for nearly a full year, since last spring’s statewide shutdown began March 16. That, he believes, does not best serve the needs of Ohio’s students.

“The justification, the reason for doing this, is very simple and singular, to get kids back in school,” he said.

In the same press conference, DeWine also announced that the number of COVID-19 cases, hospitalizations and related deaths were “all up” that week as the state began its rollout of vaccinations to hospital personnel and residents of senior care facilities. He also said that Ohio was receiving about 100,000 doses a week for distribution.

The first dose of the vaccine is to be administered to school personnel the first week in February, according to DeWine.

A reporter, noting that the state has about 300,000 teachers, asked whether there would be enough vaccine doses to go around.

“We think that everyone who wants it in the schools will have the first dose by March 1,” DeWine said.

The vaccination protocol, however, requires two doses, with the second administered either 21 or 28 days — depending on the pharmaceutical manufacturer — after the first. Few people getting their initial shot in the first week of February will have had their second dose before March 1.

“Is it safe to send teachers back into student-filled classrooms with only the first of two doses?” asked a reporter from the Columbus Dispatch.

The governor did not answer the question directly, stating, “The majority of teachers [already] have been back in class at least part of the time.”

He continued by noting that school districts didn’t have to sign the agreement.

Also speaking during the press conference, Dr. Bruce Vanderhoff, chief medical officer of the Ohio Department of Health, said that a recent state evaluation of Ohio’s schools showed that “even without the vaccine … our schools are very safe COVID environments.”

A preliminary report released Dec. 20 found little difference in the number of positive cases between students in close contact with a child who had tested positive and other classmates. Close contact was defined as being within six feet for at least 15 minutes. All students wore masks.

Nine districts in the state participated, with seven receiving COVID-19 testing. Close-contact children were tested four times over two weeks, and comparison children were tested twice over the same time period. In all, 1,501 tests were performed on 728 children, and 21 had a positive result during the evaluation. Children with a positive test were isolated and the local health department notified.

Of the close-contact students, 2.9% (15 out of 524 students) tested positive, while 3.6% (six out of 168) of those in the same class had a positive test. Additionally, none of the 36 students tested in the same grade, but different classes, had a positive result. Results were similar in elementary, middle and high schools.

The state’s conclusion is that community spread has more impact on the number of cases among children than school attendance. The full report is expected to be completed by Jan. 29, according to the Department of Health.

Concerning vaccination doses, Vanderhoff said that while completing the two-dose protocol “is very important,” the effects of the first dose alone is “not insignificant.” Early trials suggest between 52% and 80% efficacy after the first dose, depending on the manufacturer. Completing both doses has about 95% efficacy in preventing COVID-19, according to the FDA.

One Response to “Teacher vaccinations tied to reopening by March 1”