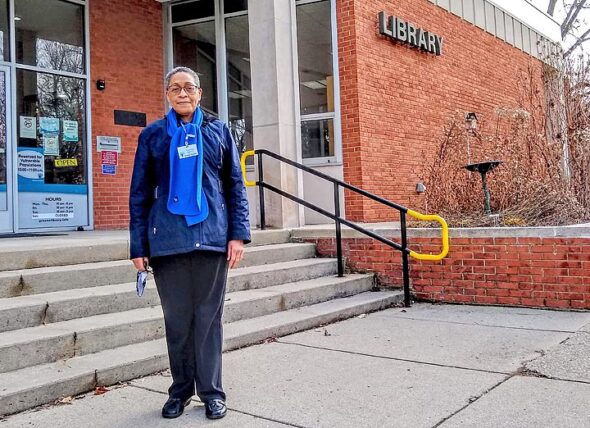 New head librarian Tracy Phillips stands near the Xenia Avenue entrance of the library, which is now used only as an exit due to COVID-19 precautions. Phillips, a village native, took the position in October of last year after working at Dayton Metro Library for more than a decade. (Photo by Lauren "Chuck" Shows)

If you’ve walked into the local library over the past several months, you might have seen a new, but familiar face — masked, of course — sitting behind the protective plastic screen that enshrouds the reference desk.

That face belongs to Tracy Phillips, who began her position as head librarian at the local branch of the Greene County Public Library in October of 2020. She took the reins from Connie Collett, who retired from the position after 31 years of service.

A Yellow Springs native, Phillips began her tenure at the helm of the village library after having worked as the branch manager of a Dayton Metro Library for 11 years. She said that coming back to the YS library — the library of her childhood — was a logical next step in her career.

“I met and worked with some good people at the Dayton Metro Library, but I just felt like it was time to come home and work in the library that I grew up in and serve this community,” she said.

Phillips’ historical relationship with the village goes beyond native or townie — her family has been in Yellow Springs for more than 150 years. Two of her forebears were Dunmore and Eliza Gwinn, who were formerly enslaved in Virginia and, along with their extended families, settled in Yellow Springs as part of The Conway Colony.

The Gwinns are pictured on the cover of “Blacks in YS: An Encyclopedia,” published by The 365 Project. As the encyclopedia recounts, the colony formed in 1862 “when the Rev. Moncure Daniel Conway left Washington, D.C., with between 29 and 31 of his father’s former slaves, bringing them to Yellow Springs, Ohio.” With money the couple had saved from operating a bakery and candy store in Washington, D.C., before Conway arrived to accompany them to the village, the Gwinns purchased five acres near present-day Grinnell Road, where they lived until their deaths.

Despite these deep ties to the village, Phillips said that, growing up, she wanted to expand her horizons — both physically and mentally. Self-described as “shy,” Phillips said she embraced books — her favorite author, she said, was Maya Angelou — as a way to see beyond the boundaries of her hometown.

“Books were my way of escaping — they transported me to different worlds and different parts of the world that I had never traveled to,” she said.

After graduating from YS High School in 1982 — and a brief stint at Antioch College — Phillips expanded her horizons even further when she left the village to attend Fisk University in Nashville, Tenn. Her love of books translated into an English major while at Fisk — “I had always seen myself as a writer,” she said — and her time there would ultimately lead to her years-long career as a librarian.

“I met someone who worked in the library at Fisk, and she thought that I should consider studying library science,” she said.

Consider it she did — and she wasn’t the only person in her immediate family to have had a career in library work, as her mother, the late Evelyn Adams Hill, had been a library assistant in the Olive Kettering Library at Antioch College for years. After graduating from Fisk and working for several years, Phillips enrolled at the Clark Atlanta University School of Library and Information Studies in Atlanta, Ga. to pursue her post-graduate degree. The prestigious school, previously the only institution offering graduate-level studies in library science in the state of Georgia, closed in 2005.

Phillips graduated from Clark Atlanta University in 1996, and almost immediately began working for the Free Library of Philadelphia, one of the largest public library systems in the nation. She said she appreciated her years of work in a major metropolitan area, but that after 13 years, she was ready to return to her roots.

“I was tired of the rat race and the fast pace — the slower pace of Yellow Springs started to look really attractive to me,” she said. “I realized the value of my family roots.”

She moved back to the village and her family in 2009, and began working at Dayton Metro Library, where she stayed until she transitioned to her current position in the village.

Naturally, coming in to head up a library in the middle of a global pandemic hasn’t been ideal. Though the library reopened relatively quickly after the statewide “shelter in place” order that was mandated in March of 2020, many of the library’s typical offerings continued to be augmented and altered when Phillips took over as head librarian.

Nevertheless, Phillips said the library remains a vital resource to the community, offering curbside pickup and virtual programming. Patrons with internet access at home can download e-books from the library’s collection without ever stepping out of their front doors. Though access to the library’s computers is limited to one hour — library staff must fully disinfect the computers between uses — they remain open for use by patrons.

“Libraries are like the gatekeepers of information — as our world changes and as technology changes, it’s our role to keep up with those changes and continue to meet the information needs of our community,” Phillips said.

Planning beyond the pandemic can be difficult, Phillips said, but she does hope to implement a new book discussion group in the near future — one focused on nonfiction.

“That’s what I mostly read now, so I’m interested in getting that going,” she said.

Primarily, though, Phillips said the thing she’s looking forward to most is getting acquainted with the patrons of the library — a task that’s been difficult, as many patrons understandably opt for curbside pickup in order to limit the risk of exposure to the coronavirus.

“There’s not as much contact with other human beings as there would normally be — unless you’re doing virtual programming,” she said. “So I’m just looking forward to that time beyond COVID when there’s more of that human connection.”

Despite the challenges the pandemic has created in Phillips’ first months holding the reins at the village library, she said she’s glad she decided to come back to her home library.

“I’m happy to be part of this community again,” she said.